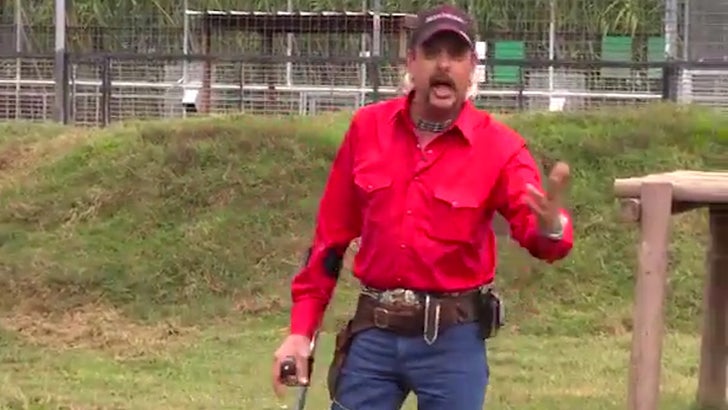 ‘Tiger King’ star Joe Exotic isn’t able to enjoy his newfound celebrity status as a free man, but he’s making the most of it behind bars … or at least he was, until he got quarantined.

Sources close to the convicted former Oklahoma zoo owner and tiger breeder tell TMZ … he was ecstatic last week — despite his incarceration — about all the popularity he’s gained since the Netflix docuseries premiered.

We’re told he’s been receiving a ton of mail in prison, and he’s replied to at least 200 emails … with plenty more waiting in his inbox.

Our sources say he had to hit pause on basking in the glory, though … because he just got transferred from a county jail that’s been holding him to a federal facility … the FMC Fort Worth prison in Texas.

The good news — Joe apparently requested the transfer because the prison is a nicer facility than where he’s been. The bad news is the prison immediately put him in quarantine as an intake safety precaution due to the coronavirus.

We’re told this means he’s unable to make any calls or check emails for the duration of his 14-day quarantine stint, and as anyone who’s seen ‘Tiger King’ knows … Joe’s not big on being alone.

Our sources say he’s champing at the bit to contact the outside world, and thank folks for making him feel loved again.

Of course, things might be different for Joe once he’s able to return to his emails … thanks to an outtake of him ranting about not being able to say the n-word while shooting his old online reality series.

Then again … he might enjoy responding to hate mail just as much as fan mail.

Hacked! – 5 Ways to Generate a List of All Installed Programs in Windows