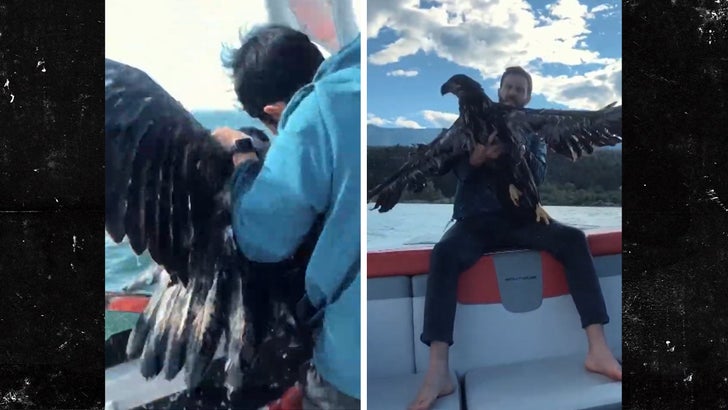 Talk about loving America … try saving a bald eagle’s life on Independence Day, and the dude who did is Canadian!!! Man, they’re nice up there.

Ya gotta see this video from Windermere Lake in British Columbia … the hero, Brett Bacon, was in the middle of a relaxing family boat ride when he spotted the giant raptor struggling in the water and sprung into action.

Brett pulled the boat right up beside the drowning bird of prey, then leaned over the side of the vessel. Now, even though it’s a baby, it’s still a bald eagle and they’re pretty huge with really sharp talons … so what Brett pulled off here is pretty courageous.

He plucked the young eagle out of the lake, and it looked super anxious after its near-death experience … trying to flap its massive wings. Brett calmly hugged the bird, trying to soothe the animal. He says it eventually dried its soaking-wet feathers, and he released the majestic creature back into the wild.

Brett’s partner captured the rescue effort on video … and you can even see his infant son in the boat watching his dad become a viral hero.

America owes ya one!!!

Sports Today – Everything you need to know about The Brawl

Hacked! – You Can Use Chrome Apps for a Little While Longer