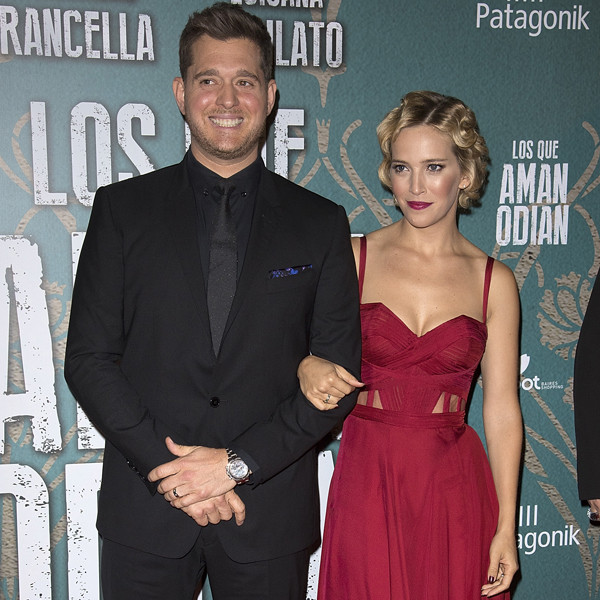 Recent videos of Michael Bublé and wife Luisana Lopilato  sparked concern among fans after the star appeared to treat his partner in a rough manner. However, his rep says these interactions are hardly cause for worry.

In a statement to E! News, the singer’s representative assured, “Anyone who watches them on Facebook live every day can see that this is a beautiful partnership filled with love.” The rep added that the allegations are “a failed effort of cyber bullying” against the couple.

This is now the third time that Michael and Luisana have had to address the controversy, which began over the weekend when they went on Instagram Live to record a video of themselves reading a children’s book. In said Live session, Bublé elbows Luisana, in what some people say was a forceful manner. He also grabbed her arm to pull her in for a hug, but fans also believe the gesture was too harsh.

Not long after, social media users brought up past clips in which the “Haven’t Met You Yet” singer allegedly berates his wife.

In one clip from March 23, the singer told the camera, “Honestly, I can’t wait till you get to see the divorce on this. Cause honestly, I’m telling you right now, if you think this is an act, it’s not an act. My God.”

In the same video, he also chastised Luisana for being two minutes late to film. “You’re so dead to me,” the  remarked as she came into the frame, before detailing the numerous “lies” he tells to people when she’s running behind.

But Luisana insisted in a statement that despite appearances she is fine. “[I] come out every day with my husband to try to do [Instagram] lives to bring some happiness, entertainment, longing, and we have to put up with, hear and see what people with ill intentions are posting without knowing anything about our family,” she shared. “And after all the pain that we have experienced, I want you all to know that I have no doubts about who my husband is and that I would chose him again a thousand times over!”

The Rebelde Way star added in a second statement that she’s grateful so many fans reached out in concern, but said it’s not necessary. With Michael by her side, she said in a video, “It’s very important that we pay attention to these problems that have been mentioned and I am lucky not to suffer. But it is important to pay attention to be able to help women that are going through it.”

Hacked! – VLC Media Player: Every Windows Keyboard Shortcut You Must...

Sports Today – The NBA is back, and here’s what we can’t wait to...

Sports Today – Here are the 172 teams that could have heard their names...