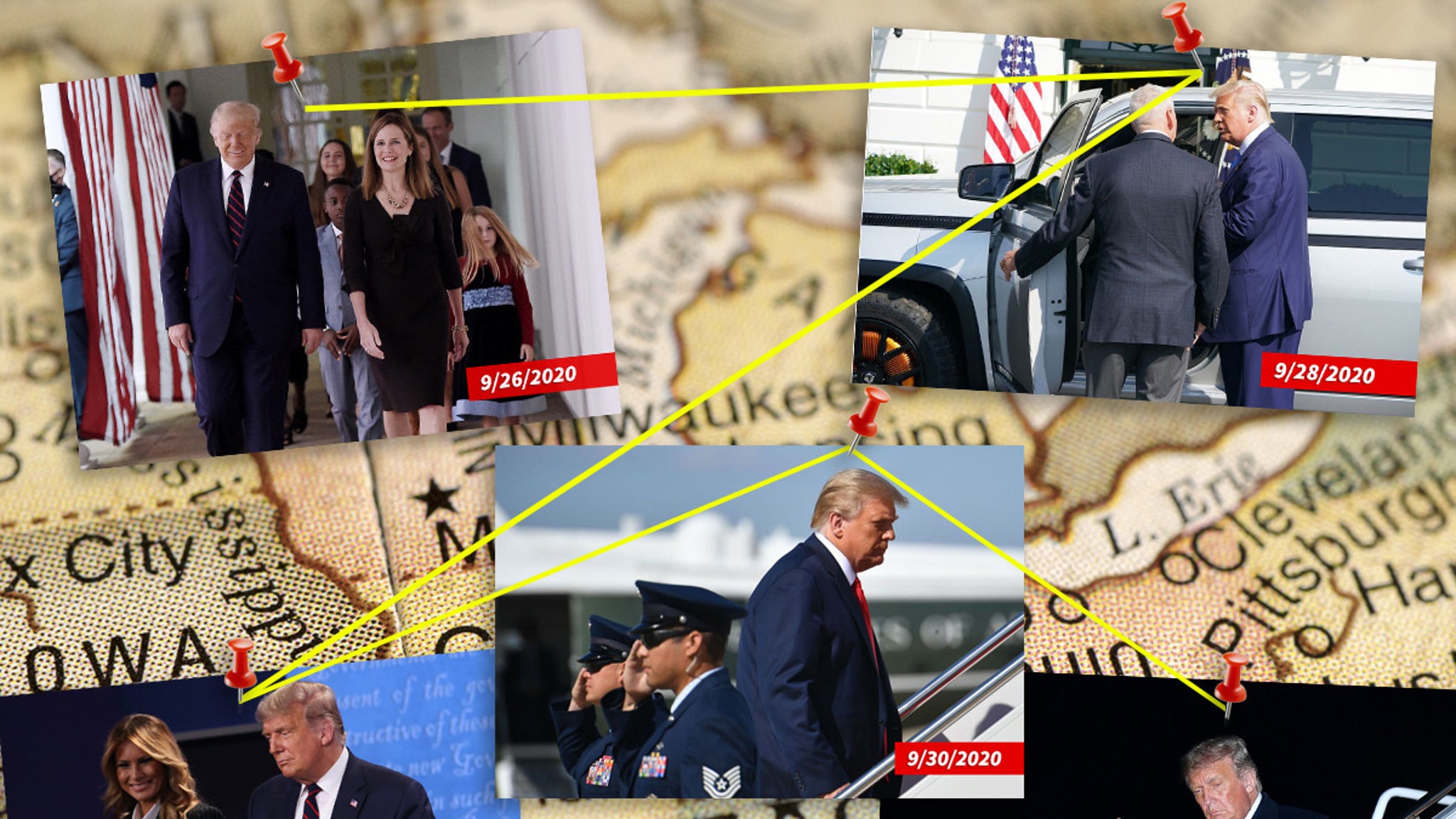 President Trump has been in close, maskless contact with many, many people — in his administration and otherwise — over the past several days … people he may have exposed to the coronavirus.

Still, Trump contracting the virus now has everyone tracing his steps the past week. Even though he didn’t test positive until Thursday, he could have been contagious for several days prior. As we reported, his adviser Hope Hicks tested positive hours before Trump, and they had traveled together.

But let’s go back … to Saturday 9/26, when Trump nominates Amy Coney Barrett and walks right next to her as both are not wearing masks.

On Sunday, Trump holds a conference meeting at the White House and later goes golfing at the National Golf Club in Sterling, Virginia.

Monday’s a big day — the Prez meets with reps from Lordstown Motors out of Ohio on the South Lawn of the WH, as well as 2 members of Congress. Later, he’s in close contact with VP Mike Pence, members of his administration and Congress, and state officials during a conference about COVID test kits.

Then of course, Trump travels with Melania and family to Cleveland on Tuesday for the first presidential debate. Though members of his family are seen wearing masks, Trump is not. At one point during the debate he took a shot at Biden for wearing a mask despite being far away from people.

Trump’s adult children and senior staffers also didn’t wear masks during the debate, which violated host rules. Hope Hicks was among the team that traveled with Trump for the debate.

Trump’s campaign reportedly did not contact Biden’s to alert them of his positive test — they learned it from news reports. Joe Biden and his wife have since tested negative for the virus.

Then on Wednesday, Trump travels to Minnesota for a private fundraiser and an outdoor rally. Again, Hicks is with him. At the rally, Trump tossed out hats to the crowd.

On the return trip, Hicks reveals she feels ill and isolates herself on Air Force One.

Despite her illness and close proximity to Trump, the President flies to his Bedminster, NJ resort Thursday for a private fundraiser. Several aides who were in proximity to Hicks scrap plans to accompany him.

Meanwhile, Ivanka — who also had close contact with her father, FLOTUS and Hicks — heads to Charlotte to meet with supporters. Soon after, it’s revealed Hicks has tested positive … as well has POTUS and FLOTUS.

Ivanka and her husband, Jared Kushner, have tested negative for COVID Friday.

However, this timeline just shows a broad overview of the potential spread and ripple effect of Trump’s positive test. He’s also been in contact with WH officials Meadows, Alex Azar, Larry Kudlow and Dan Scavino. They’ve also tested negative so far, but that could change with subsequent texts.