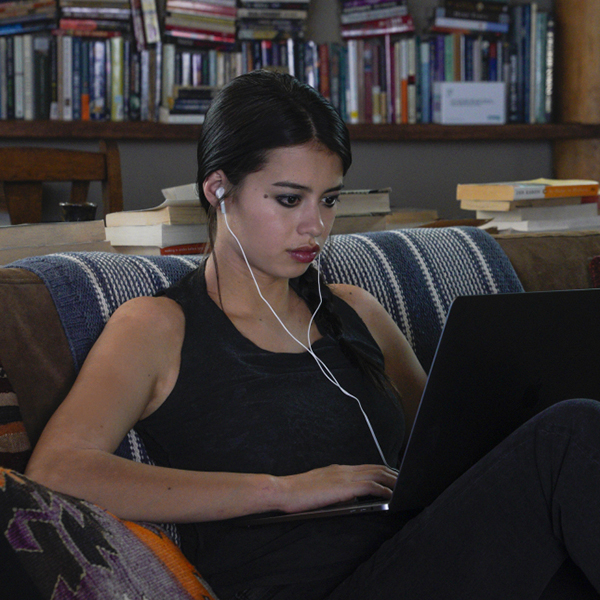 Rosa came back from the dead, and so did all of her problems.

At the end of season one of Roswell, New Mexico, Rosa (Amber Midthunder) was brought back to life after she was discovered to be preserved in an alien pod underground. Unfortunately, Max Evans (Nathan Dean Parsons) had to sacrifice himself to save her, and now not only does Rosa have to live with that guilt, but she’s also got Max contacting her from what may or may not be purgatory, asking her to prevent Liz from saving him. Plus, she can really only hang out in Max’s house, hidden away from the rest of the world doing her own kind of social distancing.

That’s a lot to deal with, and so last we saw at the end of last week’s episode, Rosa was drinking again in an effort to quiet all those thoughts and those visits from Max, who is pretty much the last person she’d like to be hearing from.

“It puts her in such a crappy situation, you know, because she hates Max, like from high school. She hated him,” Midthunder reminds us. “She was like, you’re worthless, don’t talk to my sister. Liz, don’t waste your time, move on… So like, just the fact of she doesn’t like him is one thing. But no, he’s asking her to lie to the only person that she has. You know, I think, to her, there’s kind of a total disregard of like, sure you’re going through your own thing but like, hi, you did this to me, and I didn’t ask for that.”

Not only is he asking Rosa to lie to Liz, he’s asking her to break Liz’s heart.

“It’s super rude,” Midthunder points out. “Very uncool of him to do.”

Rosa also can’t really talk to anyone other than Liz and has to stay hidden from her dad and the entire town, which still believes she was drunk driving and killed her friends, and she’s also dealing with this wild time jump. For her, the accident was practically yesterday, but for everyone else, it was 10 years ago.

“So there’s this sense of like she already felt kind of like she was the odd one out in any situation and this losing out on 10 years of life for everybody else, regardless of their relationship, regardless of how they feel about each other, they’ve all gone through these 10 years together. So I think it just pushes her farther out, you know, and isolates her.

“That’s the hardest thing is like, right now, we all are like in this isolation time, but we’re all experiencing it together. She’s the only one who has to do it,” she says. “[Showrunner Carina Adly MacKenzie] and I talked a lot about how she feels like a ghost. And she does. You know, I think that also the farther you get you get pushed out? What comfort do you have if you can’t even reach out to your person? I think that’s also what pushes her further into her addiction.”

Rosa’s not at her breaking point yet, meaning things are going to get darker for her.

“It’s hard because you kind of pray that anybody who struggles with this, they hit their rock bottom sooner rather than later because that’s the only thing that’s going to turn them back up. She obviously didn’t shake the addiction just with her body. It’s also about her mind and her personal wellbeing, but the thing that I think the Ortechos all share is they’re resilient. But it’s definitely going to get a little worse before it gets better.”

Midthunder has been particularly invested in portraying Rosa’s addiction accurately and sympathetically, since she’s seen it affect people firsthand and studied the subject in depth before shooting began, and she hopes an accurate portrayal might help raise awareness.

“I’ve seen [addiction] touch a lot of people in my life, and you know, I’m a Native American. My reservation’s in Montana, and alcoholism is a real thing. It’s a problem, and I care a lot about it,” she says. “And I care that native people and non-native people, and especially this audience, see the truth, because I think there’s a lot of glorifying things and making things cool that really are not cool. And they’re attractive for .a second, and it might come off attractive for a second to the people that you’re around, or even the way that it feels, but it’s not appealing. It’s not. It’s really destructive. It’s really horrible. And I just feel really strongly that people understand that, because the opioid crisis is so huge right now, and it only gets bigger and continues to grow. There’s got to be some good, and I feel like the best way to get that is via information. So I feel passionate about informing people. I feel like the more you are informed, the more you can make your choices and know what you’re actually doing, or what you’re actually getting into.”

Roswell, New Mexico airs Mondays at 9 p.m. on The CW.