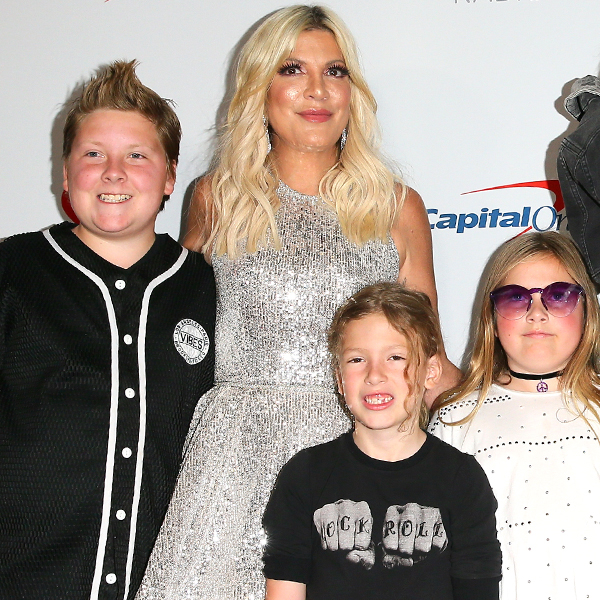 Tori Spelling says she’s a “worried mama” because of how much the two eldest of her and husband Dean McDermott‘s five children, Stella, 11, and Liam, 12, have been bullied at school.

The Beverly Hills, 90210 alum and former reality star detailed the extent of their suffering and how it’s affected their mental and physical health on her Instagram page on Saturday, alongside a photo of the two as toddlers.

“My two 1st born… they have been thru so much bullying I can no longer not share and express ourselves,” Spelling wrote.

Stella, she said, “endured enough bullying for a lifetime” between her last year of elementary school and the first year of middle school.

“Her old school in Encino, we were told she is acting like ‘Patient zero’ and ‘she’s playing the victim’ & ‘we are talking to the parents of that said bully’ and ‘he is trying to change.’ He never did!” Spelling wrote. “Never any consequences for his actions towards my daughter and other kids. This child’s parents are on the board of the school. They give a lot of money to this school. Financially, we aren’t able too. So, they won.”

Spelling said they had Stella attend another school that “professed feelings and kindness as a priority,” where she “was bullied so bad (including comments about her weight and sexual things he said that my daughter didn’t even know about).”

“This school did the right thing and expelled the boy but the damage had been done,” Spelling wrote. “She now associates her education with boys that have been so horrific to her. She wanted to empower others girls and be a business leader. She now has panic attacks and doesn’t want to return to school. This girl, 2 years ago told me she wanted to be President or work to empower women daily.”

As for Liam, Spelling said he graduated from an elementary school in Encino last year, “but not without the principal telling us he was ‘unmotivated’ & lazy.”

“Poor guy thought from way he was treated by her that he was ‘stupid,'” Spelling wrote. “Beyond not the case. He is a hilarious, smart, outgoing, and a creative kind guy! Then, he started his new middle school. Same school as Stella. He was bullied to the point that he developed severe emotional based headaches and stomach aches. This school (who did help with Stella’s situation) did not help with Liams. He continued to be bullied so bad we had to leave.”

“Was hesitant to post this bc as celebs we are sometimes judged for having problems others have #worriedmomma,” she wrote.

Bullying has not been confined to schools. Strangers have occasionally felt free to slam the family on social media. Last year, McDermott took to Instagram to clap back at trolls who criticized his and Spellings’ kids’ weight and clothing.

“I am absolutely horrified and disgusted by the comments being left about my children,” he wrote. “Body shaming and bullying my children??!! What is wrong with you people??!!”

“Hey everybody I am sick and tired, sick and tired, of everybody taking a shot at my wife Tori Spelling,” McDermott said in a selfie video. “Just because she’s a celebrity they think they can say and do whatever they want. She posted about a snack. It’s a snack, people. Haven’t we given our kids a snack before? Cakes, cookies, whatever. It’s a snack.”

Hacked! – Pareidolia: Why We See Faces in Almost Everything