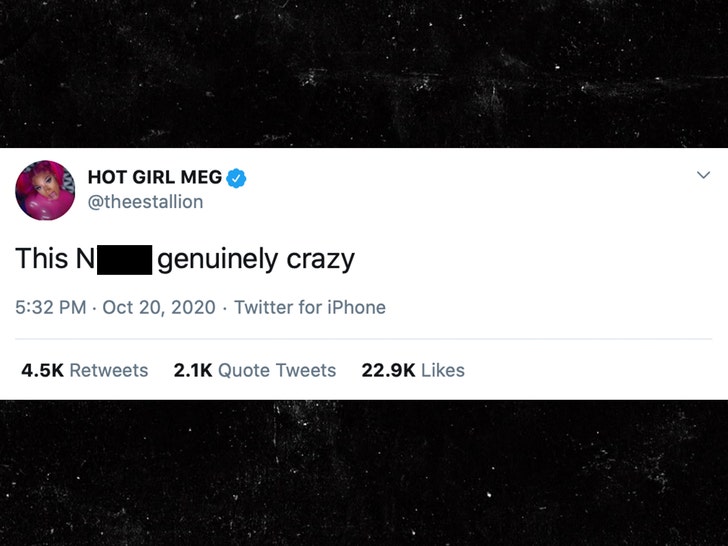 Tory Lanez says he still considers Megan Thee Stallion a friend despite her claim he shot her … but Meg doesn’t sound too friendly.

The rapper proclaimed his innocence for the first time on video Tuesday, hopping on Instagram Live to defend himself against Megan’s accusations, and he really raised eyebrows when he said, in his book, they’re still pals.

The friendship sounds like news to Meg … she says Tory is “genuinely crazy.”

It’s not like they can hang out as friends anymore anyways … Tory was ordered to stay the hell away from MTS after a hearing on his felony assault charge in connection with the shooting.

Tory’s now calling the shooting a “debacle” and says the only people who really know what happened are him and Meg. Seems he’s forgetting Meg’s friend and his chauffeur were also there when a gun went off during an argument.

Tory says he’s not talking down to Meg or disrespecting her, but says he’s tired of his name and character being assassinated for something he “did not do.”

Hacked! – How Lifetime Access to Rosetta Stone Is Cheaper Than You Think

Hacked! – Use Mondly to Learn a New Language and Have Fun Doing It

Viral – WHEN THE CAT IS AWAY, THE MOUSE WILL PLAY!