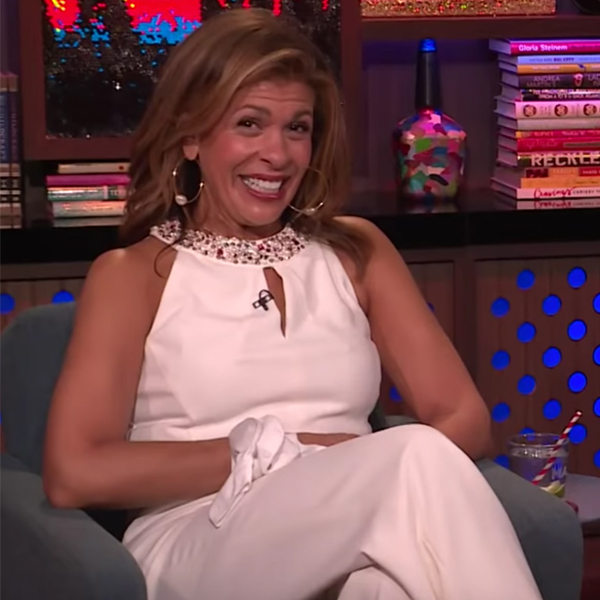 It was another day for Hoda Kotb as she co-hosted Today on Tuesday morning—that is, until it was time for an interview with Tracy Morgan on live morning television. The anchor kicked off their interview by asking the comedian what life is like being at home with him and his family during the ongoing coronavirus pandemic.

“Well, me and my wife have been quarantining it for like three weeks, so she’s pregnant three times. Every week she got pregnant,” the star responded, referencing his wife of nearly five years, Megan Wollover. The couple are parents to 6-year-old daughter Maven.

While the TV mostly showed Morgan, anytime it cut to Kotb, she laughed it off and smiled through the awkward exchange.

“And also, we’re role-playing a lot now,” he added. “She’s playing a young maiden whose grandfather was infected with coronavirus and I’m the scientist who discovered the cure and she’ll do anything to save her grandfather’s life—and I mean anything.”

Kotb’s response? “You are a creative one.”

Then the conversation shifted to the celebrity’s home, where he has a wall-sized fish tank. Morgan noted, given recent news that a tiger at the Bronx Zoo tested positive for coronavirus, he wants to get all of his pets tested, including a 600-pound gorilla he allegedly recently purchased.

It’s never a dull moment when @TracyMorgan is on! Watch the full interview with the comedy star who talks about coronavirus and dealing with the unknown, “We all got to pull together as people,” he says. pic.twitter.com/nVG8DjAxg2

When Kotb asked him if he is “for real or you just pretending,” he confirmed, “I’m for real, man. This is real stuff!”

On a more serious note, Morgan, who famously survived a 2014 crash, had powerful words for healthcare workers.

“I spent a lot of time in the hospital and I know what goes on in there and I know these people, they work hard to take care of you. I’m very proud of them. They’re my heroes,” he told her.

(E! and NBC are both part of the NBCUniversal family.)

Watch NBC News Special Report: Coronavirus Pandemic Tuesdays at 10 p.m. ET/7 p.m. PT on NBC, MSNBC and NBC News NOW. For the latest updates on the coronavirus pandemic and for tips on how to prevent the spread of COVID-19, please visit The Center for Disease Control and Prevention at https://www.cdc.gov.

Hacked! – Everything You Need to Collaborate on a Music Project Remotely

Hacked! – Everything You Need to Collaborate on a Music Project...

Hacked! – How to Clean and Store Your Cloth Face Mask

Hollywood Today – Clare Crawley Responds to The Bachelorette Getting Postponed