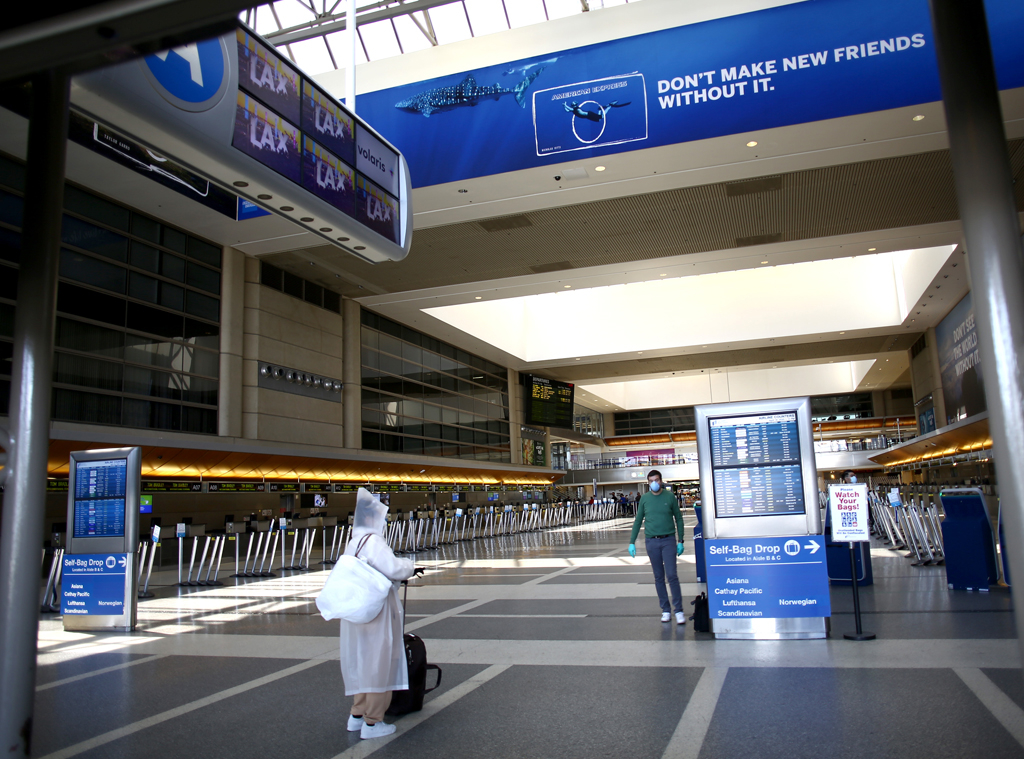 I’ve traveled a lot over the years, saving up all the dollars and vacation days I can manage to embark on solo adventures around the globe.

Whether I’ve ended up road-tripping through Europe, on a propeller plane in Africa or riding in a Tuk-Tuk in Asia, my exploits often begin and end at LAX, or Los Angeles International Airport—a sprawling, frenetic mass of concrete that represents home to me. I have a love-hate relationship with the place because, while it marks the beginning of some of my favorite memories, it’s also been a source of frustration thanks to hours spent in stuffy car rides as I make the usually hours-long journey between my house and the international terminal.

None of my previous experiences prepared me for what it was like to be there during a global pandemic.

I wasn’t planning on traveling right now, but after almost two months of quarantining alone in L.A., an ocean away from my family and boyfriend, it was time to go home for a bit. There’s nothing quite like a crisis to make you feel worlds away from the people you love most in life.

While I was excited about finally reuniting with my family, I was also nervous about spending 11 hours in close proximity with other people while flying in a metal container with only recycled air to breathe. Bear in mind, video calls have been the closest thing I’ve had to actual human-to-human interaction over the past couple months.

The car ride to the airport raced by. No traffic meant I barely made a dent in the hour-long podcast I had downloaded for the journey. At LAX it felt like I had accidentally stumbled upon the deserted set of a sci-fi movie. The mid-century modern architecture glistened in the 90-degree heat. Entranceways, which were usually hidden from view thanks to endless cars, cabs, hotel courtesy shuttles and bewildered travelers milling around, were on full display. It was a Saturday, what should have been a busy day for a global travel hub, and yet there wasn’t another human being, or piece of oversized luggage, in sight.

“I’ve never seen it like that in 20 years,” my Uber driver exclaimed as he told me I was his first airport drop off in six weeks.

An eerie silence greeted me as I collected my bags from the trunk of the car and walked into the terminal. Gone were the billowing voices which normally announced the arrival and departure details of jetsetters over the loudspeaker, as was the constant hum of never-ending take-off and landings overhead. Even the beeps from angry taxis drivers who were used to spending the majority of their day battling the incessant L.A. traffic had been quieted.

“I need you to fill this in,” instructed the masked man at the check-in desk for my flight. Do you have a cough, a temperature, any signs at all of COVID-19? the health form asked. I ticked “no” to all. More than a month of social distancing meant that even the annual cold I was usually afflicted with had been absent this year.

The long stream of passengers that usually snaked their way to the metal detectors en route to the gates was reduced to just me and one other person. Lines were marked on the floor to remind us to stand 6 feet apart. I removed my mask briefly so the TSA officer could match my features to my passport picture.

Then I walked straight to a restroom cubicle and changed my clothes, throwing the outfit I had worn in the Uber straight into the trash.

Having just a mask and plastic gloves on a long-haul flight hadn’t felt like enough protection, so days before I had rummaged around in the back of my dresser and found two pairs of faded leggings from Old Navy, circa 1993. One had holes at the seams; the other was barely able to stay up, thanks to a worn-out elastic waistband. By wearing and discarding old clothes on each step of the journey I hoped to create an extra barrier between me and any possible infected seat upholstery from either the car or my plane. I know it sounds like an extreme measure, but the last thing I wanted to do was risk carrying the disease with me.

With a new change of clothes, I ventured out into the terminal. Pre-Covid-19, the Tom Bradley International Terminal could be a mecca for fashionistas thanks to the Gucci and Hermès stores sprinkled among the ubiquitous Starbucks and newsstands. Anyone hoping to make a last-minute purchase would have been disappointed, though: the only shops that were open were ones selling overpriced bottles of water. The store closures felt even more ominous with barely any passengers milling about. Anyone that was traveling had his or her face obscured by protective equipment—and yes, there were even a few people following Naomi Campbell‘s lead and wearing a hazmat suit.

It was obvious no one wanted to take any more chances than they had to to get somewhere.

When I boarded my flight, rather than finding a pillow and blanket at my seat (as is normal for a direct long-haul flight), there was a plastic-wrapped cheese sandwich and some granola bars waiting for me instead. “There won’t be the usual meal or drinks service on this flight,” the attendant informed me through the paper covering her mouth. “And all passengers are required to wear a mask for the duration of this journey.”

By the time we finished boarding, 100 people were buckled in, a fraction of the almost 400 a 777 can usually accommodate. Apparently only 20 people were on the previous flight. In economy class, passengers were told they had to sit by the window, or in the middle of the middle row. No one was allowed to sit on the aisle if they could avoid it.

The airline seemed to be taking every precaution and yet everyone still seemed on edge. The usual pre-vacation excitement had been replaced by a tense uneasiness, borne from a trip being made out of necessity rather than pleasure. Maybe it was just me, but it seemed as if we were not only cautious about the virus but also suspicious of one another, afraid if we shared even a glance or a smile we might catch something.

It wasn’t until the next morning that I was finally able to disembark. I immediately went to the restroom and threw away the pair of leggings I should have trashed a decade ago.

“Welcome to the Netherlands,” said the border control officer. “Make sure you stay inside for the next two weeks.”

Sports Today – Yes, NFL draft prospect Whop Philyor got his nickname from a...

Hacked! – You Can Now Get Free PS4 Games From Sony