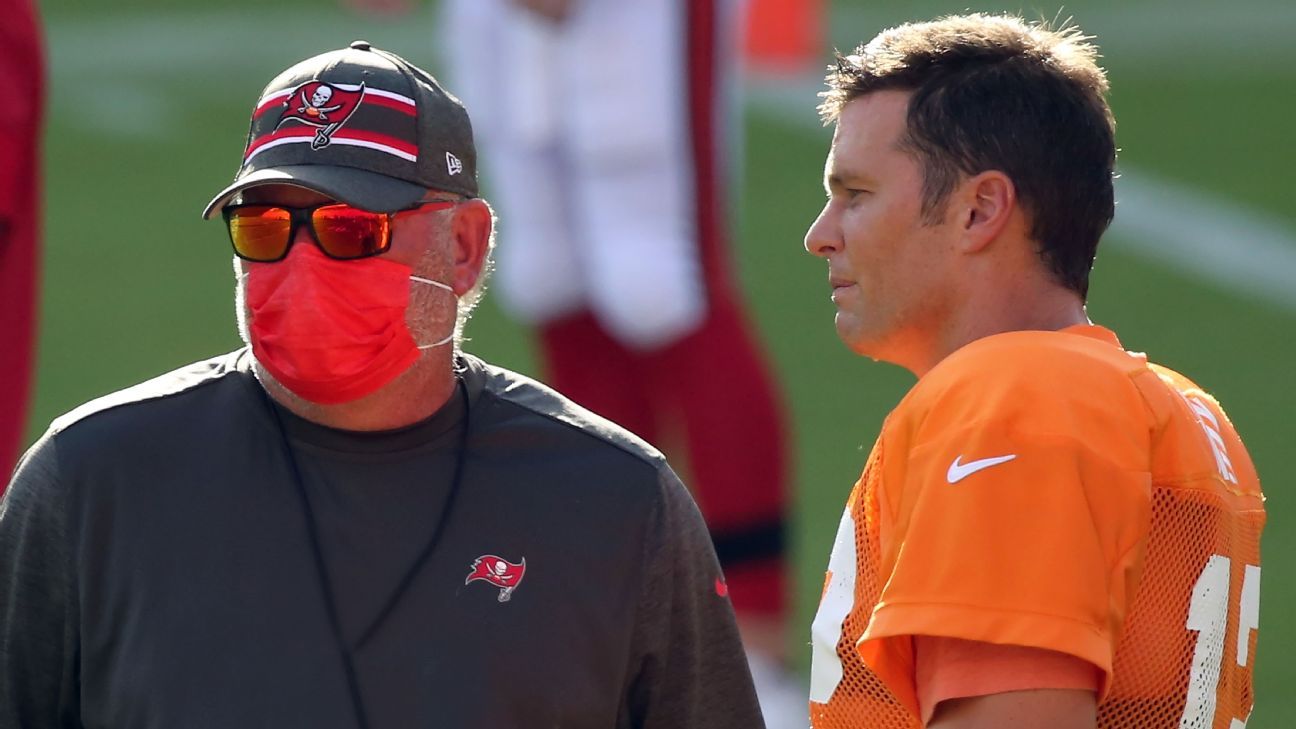 TAMPA, Fla. — Tampa Bay Buccaneers coach Bruce Arians said he does not care what people have to say about him pointing out quarterback Tom Brady‘s mistakes publicly after Sunday’s loss to the New Orleans Saints.

Arians has not shied away from calling out players in the media in the past, and he said Wednesday that he believes his relationship with Brady is healthy.

“Tom and I are fine. I don’t really care what other people think. So it’s just what he and I think,” Arians said Wednesday with a chuckle. “We left the stadium fine. We showed up today fine. There ain’t nothin’ to talk about.”

On Tuesday, Pro Football Hall of Famer Brett Favre said on his radio show, “The SiriusXM Blitz” with Bruce Murray, that unless the coach and quarterback have an understanding, calling out Brady publicly can lead to tension down the road.

“Getting to Bruce Arians’ comments, true or not, I think the last person you want to call out after the first game of the year is Tom Brady,” Favre said Tuesday. “Now, maybe they had a mutual truce going into the game, going into the season, ‘Hey, I’m going to be hard on you. I want the guys to know we’re going to treat you the same even though technically I’m not, so are you OK with it?’ If they have that truce, great. If not, I think you are barking up the wrong tree.”

After the game, Arians was asked about Brady’s two interceptions. He responded, “One was a miscommunication between he and Mike [Evans]. He thought Mike was going down the middle — it was a different coverage — Mike read it right. He should have been across his face, but Tom overthrew it. The other one was a screen pass with an outlet called. He threw the outlet and it was a pick-six. Bad decision.”

Arians corrected himself Monday, saying Evans was actually at fault for the first interception.

“Dissension could easily enter quickly,” said Favre, who has a unique perspective, having spent 16 seasons with the Green Bay Packers before going to the New York Jets in 2008 and Minnesota Vikings from 2009 to 2010. “Maybe the Saints didn’t do anything that they were not ready for other than we didn’t protect very well, Tom gets hit a couple of times, you get a little jittery, it happens.”

But he also believes in holding them accountable, just like all his players, which is why he’ll put their names on weekly accountability sheets. It’s also why he cursed Brady out in a walk-through early in camp.

“He gets cussed out like everybody else,” Arians said of Brady during camp, adding, “He likes to throw the ball in walk-throughs, and we don’t throw the ball in walk-throughs.” Brady responded on Twitter, “I’m used to it!” with a laughing emoji. Brady isn’t a stranger to hard coaching. He’s been cursed at by Bill Belichick in training camp practices. He got into a shouting match with former offensive coordinator Bill O’Brien.

What separates Arians from other coaches is that he avoids coachspeak and tends to be more candid with the media. If he thinks a player is underperforming or that the players around him need to step up, he’ll say so. Still, he’s showered Brady with praise. He abides by mentor Bear Bryant’s philosophy of “Coach them hard, hug them later.”

Favre thinks that Arians should abide by Belichick’s methods of keeping things in-house.

“Bruce Arians is the head coach, he’s gonna do it the way he wants to do it — and I’m not saying that it’s right or wrong — but what’s happened in New England for so many years is that it worked,” Favre said. “And I’m not saying that it’s the right formula, but it certainly is one of the right formulas. I just don’t see any good that comes out of calling your quarterback out.

As far as the public writing Brady and the Bucs off after one game, Arians said Wednesday, “I was amused when they handed us the Lombardi trophy in July. But, yeah, it’s part of the business. You go with it. It’s one week at a time, one day at a time. We win a few games, everybody will be back on the bandwagon, happy [laughs]. It’s just part of the game.”

Hacked! – The Maillard Reaction and the Science of Browning Foods

Hacked! – Where to Find Free Furniture Online: The 4 Best Sites