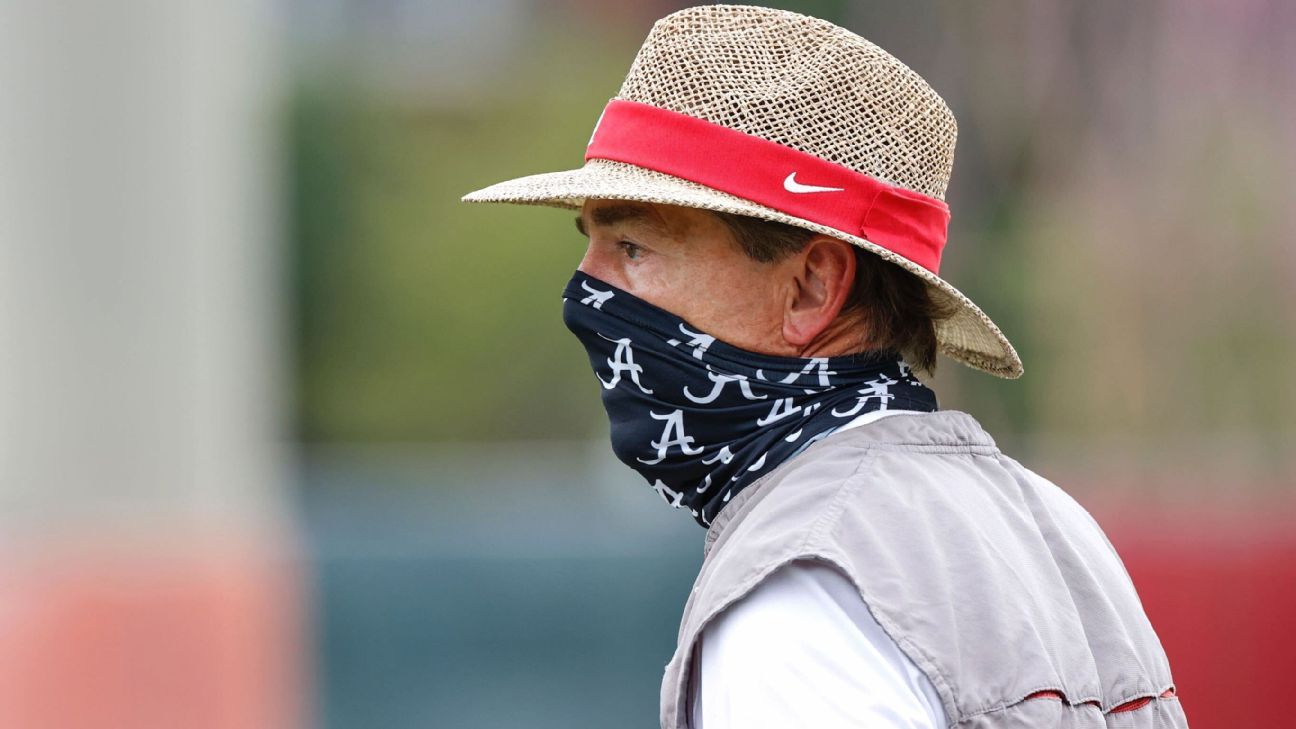 TUSCALOOSA, Ala. — Jeff Allen glances down nervously at his smartwatch after seeing that a new message has just popped in.

It’s 9:45 a.m. on Sept. 17, still more than a week away from Alabama’s season opener, and the Crimson Tide’s veteran head athletic trainer looks up after reading the message and slowly exhales.

“Just got the word that all [COVID-19] tests were negative. Thank God!” Allen says from underneath his mask. “I know it’s coming, this time every day. That anxiety is daily because you know if you’ve got a couple of positives where that leads.”

Nothing has been normal in the college football world for Alabama — or anyone else — these past six months. To get a sense of how the Crimson Tide are adjusting, head coach Nick Saban allowed ESPN behind the scenes, from the practice field to the meeting rooms to the cafeteria, as the No. 2-ranked Tide prepared to open their season Saturday night at Missouri (7 p.m. ET, ESPN/ESPN App).

“It’s one of the greatest challenges any of us has faced, all that goes into getting a team ready to play football in the middle of a pandemic and doing everything we can to keep people safe,” Saban told ESPN. “But that doesn’t mean we were going to throw up our hands and not try.”

A major part of Alabama’s plan has been daily coronavirus testing, even though SEC guidelines mandate only three tests per week. Alabama will spend approximately $5 million this year on testing for all sports, according to athletic director Greg Byrne.

“It’s worth it and the right thing to do,” said Byrne, whose athletic department will see a $75 million revenue shortfall in part due to only 20,000 fans being allowed into Bryant-Denny Stadium this season for home games.

When Alabama’s players first returned to campus in June, Allen said the football team had a surge of positive tests. (The Tide have declined to provide specific numbers for the football team.) But since July 4, the positivity rate on tests has been running just under 2%. And going back to June, Alabama has been doing a full cardiovascular work-up on every player who tested positive for the virus, and the player then has a follow-up appointment with a physician every two weeks for two months.

“All the concerns about myocarditis, the stuff that came up with the Big Ten discussions, that’s something we’ve been monitoring since April,” Allen said. “That’s why we’re renting an echocardiogram machine to have on site here and bringing in a technician to run it. So if a player gets COVID, he’s going to get lab work, an EKG and an echocardiogram, and it’s all done right here.”

Allen is the only remaining football staff member who came to Alabama with Saban in 2007, and there’s incredible trust between the two. Saban has joked in the past that Allen is the last man standing.

“Most of the days, anyway, I’m standing,” Allen quipped.

Allen’s day has been known to start as early as 4:30 in the morning, as the Alabama players start wandering in for testing just before 7 o’clock.

“You have to track anybody down this morning?” Allen asks one of his assistants and later scolds one player to “get that mask up.”

“It’s taken everybody we’ve got,” he said.

At least three different times throughout the day, Allen’s student assistants comb through the meeting rooms, weight room, locker room, dining area and any other high-touch areas with paint-gun sprayers, disinfecting the entire building. Every meeting room has a sanitation system that is supposed to filter the air through UV lighting.

Saban’s morning staff meetings, typically held in the boardroom just outside his office, are now conducted in one of the auditorium team meeting rooms with coaches spread out all the way to the top and wearing masks.

On the field, Alabama’s practices look much the same as they always have under Saban — fast, physical and never lacking for contact.

“A lot of off-the-field stuff has changed, but we feel like we’ve created an atmosphere where what we do on the field hasn’t changed,” Saban said.

The coaches and support staff on the practice field don masks, and a few of the coaches also wear face shields. Even though his mask might muffle his unmistakable voice, nobody has any problem hearing Saban bark, “Run it again,” when he doesn’t like what he sees.

“The virus is always on your mind, and you’ve got to respect it,” Alabama senior quarterback Mac Jones said. “But when we’re on that field, we’re thinking football and football only.”

Saban and Allen have emphasized the importance of creating both a team bubble and personal bubble, and even had the U.S. Surgeon General speak with the team via Zoom. Alabama’s veteran players have made it clear that there will be hell to pay if they hear about anybody on the team living it up downtown at the bars or attending any parties.

“Everything that we’ve done to make this season happen, we can walk it all back with one person getting the virus,” Jones said. “That was my message to the team, along with [Dylan Moses] and some of the older guys. We’re going to wear our masks, eliminate being around large groups and do what they ask us to do.

“I went out a lot when I was younger, so I’ve been there. It’s really hard. But let’s grind it out for five more months, and after we win the national championship, then everyone can celebrate.”

Jones’ girlfriend, Sophie Scott, even took a leave of absence from her job at the university orthopedic clinic to make sure she wasn’t around anybody who might expose her and potentially spread the virus to Jones.

“That was so awesome of her,” Jones said. “She just didn’t want to take any chances of being around somebody who had it and then me getting it.”

The day before Alabama began practice on Aug. 17, Allen coordinated a presentation for the entire team, an intricate slideshow complete with data from the CDC and other medical studies, and he also included a scene from the downtown bar area in Tuscaloosa after the Crimson Tide won the national championship a few years ago.

“So don’t tell me that you’re scared of playing football, but that you’re going to go to something like this,” Allen told the players.

While a college campus can never create a true bubble like some professional leagues, Alabama has tried to create its own, aided by the fact that the large majority of the players are taking online classes this semester.

Alabama also had the players take part in an anonymous survey. Among the questions: Do you have concerns about playing football this year?

One of the players responded, “No, I’ve been waiting my whole life to play and everything going on really doesn’t matter to me. If we get tested, let us play.”

Another player, on whether he had concerns, answered, “Yes, a f—ton,” while another said simply, “We should cancel.”

And yet another answered that Alabama’s efforts in making the players feel safe and comfortable were “perfect.”

To this point, Alabama, a team with as many elite NFL draft prospects as anyone else, has had just one player opt out of the season. (Saban said he promised the player he wouldn’t reveal his name publicly.)

“I think that says that we have a team that knows what it wants to accomplish and a team that knows we’re willing and trying to do things the right way so that they have that opportunity,” Saban said. “To our team’s credit, the players have really stuck together through all of this.”

While the medical staff, coaches and players have been the focal point of Alabama’s changes, everybody within the football complex has seen their responsibilities grow and routine disrupted.

Ellis Ponder, Alabama’s chief operating officer for football, looks over the seating chart for the plane trip to Missouri. The goal is to keep at least one open seat between every player. Then there’s the list of everybody on the trip who still needs to be tested.

“The bus driver needs to be tested?” Ponder asks.

Meal time is markedly different. The days of players going through the buffet line are over, as all meals are now prepackaged. Amy Bragg, Alabama’s director of performance nutrition, sends the players twice-daily text messages that includes that day’s menu.

That’s considerable progress from earlier this year, when they were doing curbside service and taking meals to the players in their cars.

Even the media interview room just outside the office of director of football communications Josh Maxson now doubles as an offensive meeting room for offensive coordinator Steve Sarkisian and some of the coaches and players.

“All of us in athletics are creatures of habit and used to routine, including the players, and there ain’t nothing routine about any of this,” Allen said. “We’ve flipped and flopped, based on numbers, to effectively spread them out on planes, in meeting rooms, in the dining hall and are doing everything we can to keep guys in the same position groups away from each other when they’re not on the field.”

Allen isn’t ready to claim victory, not when he knows everything could come crashing down the next morning with an influx of positive tests and resulting quarantines.

“It’s not like we’ve got this thing figured out,” Allen said. “There’s always a next hurdle to cross.”

A player testing positive is isolated for 10 days. After that, the player falls into a 90-day window from his test date that he doesn’t have to be tested and isn’t going to be counted as an exposure. But anyone who is deemed to have come in close contact with a player who tested positive also needs to quarantine for 14 days.

“Playing football, you’re in somebody’s face on every play. That’s where the testing comes in,” Dickerson said. “It’s when you’re away from the field that you’re always looking around and making sure you’re keeping your distance. Our guys take that as seriously as doing things right on the field. We want this season to happen.”

Alabama has named its new signal-caller in Mac Jones, who will attempt to lead the 2020 Crimson Tide to another national championship.

As the anticipation in Alabama’s camp builds for the opener against Missouri, there’s also some restlessness after Missouri coach Eliah Drinkwitz said before game week that the Tigers would have 12 players out for the game for COVID-19 reasons. (On Tuesday, Drinkwitz revised that number to seven players, after inconclusive tests for five players were redone and came back negative.)

“Our guys are just ready to play, in any game and against any team,” Jones said. “Now that it’s almost here, I can’t even imagine not playing.”

Neither can Allen, especially given everything it has taken to get to this point.

“You keep hearing people saying that we’ve just got to get this off the ground,” Allen said. “That’s literally how I feel. Once that plane gets off the ground and those wheels leave the runway in Tuscaloosa, I will know we have done what we’ve been trying to do since March, which is give our guys a chance to play.”

And only then will Allen be able to fully breathe. At least until that next batch of test results pops in on his smartwatch.

Sports Today – Eagles remove Jalen Hurts, and Giants players, fans are beside themselves

Trending – Donita Nose on her way to recovery from COVID-19, plans to stage...