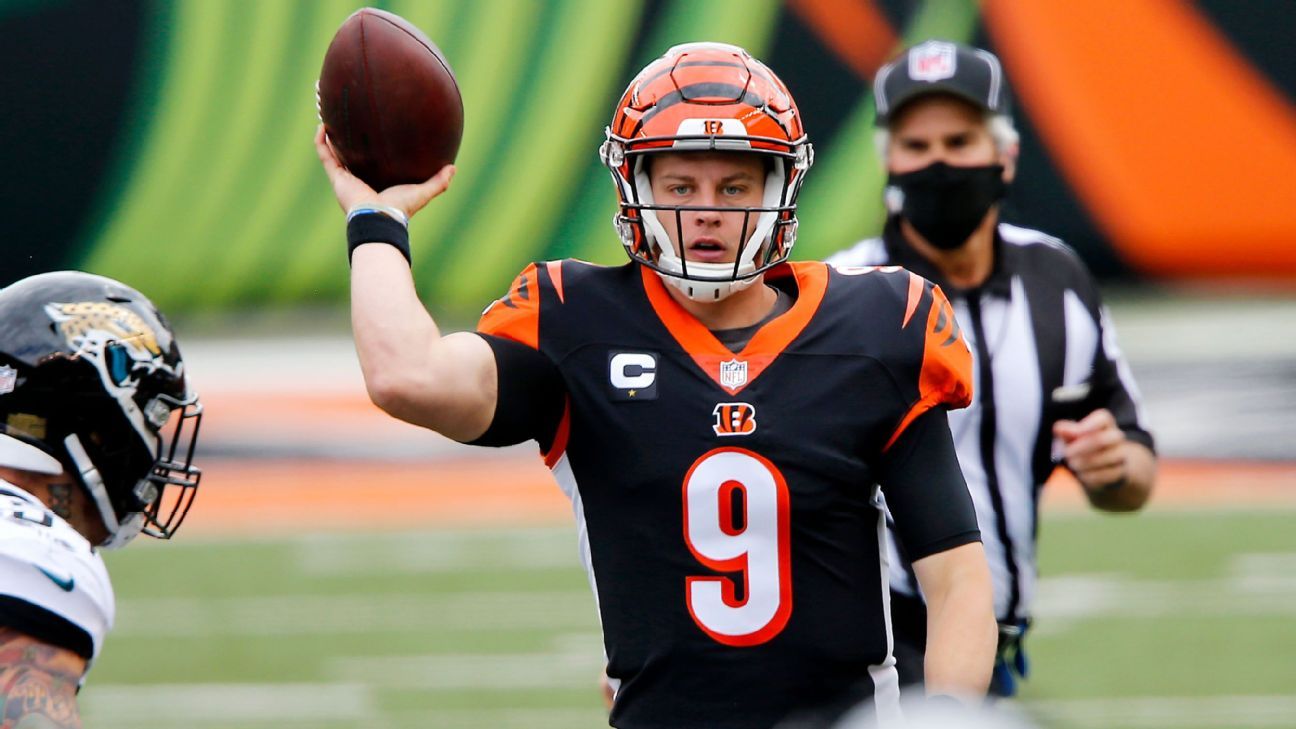 He had to make history while he did it, too.

This year’s top overall draft pick finally secured his first pro victory in the Bengals’ 33-25 win over the Jacksonville Jaguars at Paul Brown Stadium. In the process, Burrow became the first rookie quarterback in NFL history to throw for 300 or more yards in three straight games.

After four games, Bengals coach Zac Taylor said it no longer feels like the team has a rookie quarterback. And after a few winless games to start the year, the second-year coach admitted it’s good for Burrow to get that elusive first win.

“It gets the monkey off your back a little bit,” Taylor said. “That’s the truth. You gotta get that first win of the season. A lot of the small things that pop over the weeks when you’re not winning, they add up.

“So to get that first win, everybody gets that pressure off of him a little bit. Now we can just free up and go play ball.”

Against the Jaguars, Burrow once again showed why Cincinnati believes he is their next franchise quarterback. The Heisman Trophy winner was 25-for-36 for 300 yards, one touchdown and one interception.

Burrow secured the historic mark on a 23-yard completion by rookie Tee Higgins in the fourth quarter. He beat Chargers rookie Justin Herbert to the accomplishment. Herbert had a crack at also reaching the feat coming into this weekend’s game against the Tampa Bay Buccaneers. Herbert finished with 290 yards in a loss.

Burrow shrugged off the accomplishment and said the win was all he cared about, a refrain that has been repeated even as the Bengals went 0-2-1 to start Burrow’s tenure as the starting quarterback.

Joe Mixon scores twice on the ground and once through the air for a career-high three touchdowns in the Bengals’ win over the Jaguars.

But the former LSU standout did concede that he is feeling comfortable with Taylor and his new offense, which has produced the strong start to his NFL career.

“I think Zac has done a great job of asking what I’m comfortable with and calling those plays,” Burrow said. “And he understands what I like in certain situations.”

The Bengals quarterback could have had a bigger stat line against Jacksonville (1-3) if a couple of plays went his way. Burrow had a first-half touchdown throw to receiver Tyler Boyd negated because of a holding penalty. Later in the half, Burrow had a potential TD throw go off tight end Drew Sample‘s facemask and the ball was wrestled away by Jacksonville linebacker Myles Jack for an interception.

But the first-half errors and a 13-10 halftime deficit weren’t enough to derail Burrow.

Led by Burrow, Cincinnati’s offense outscored the Jaguars by 17 points in the third quarter, when Burrow went 7-for-11 for 75 yards.

Cincinnati came close to giving Burrow his first win in his NFL debut. The Bengals were a play away from taking a late lead over the Chargers in Week 1, a game the Bengals eventually lost after a missed field goal at the end of regulation.

On Sunday, Burrow and the Bengals made sure it was never that close. Cincinnati also avoided going winless in its first four games for the second straight season, something the team hasn’t done in 20 years.

While most of the announced crowd of 6,243 had cleared out on a cloudy and rainy day, several fans waited near the tunnel while Burrow wrapped up his postgame TV obligations. When he finally made his way toward the fans, he flashed a thumbs-up to those who gave the rookie one more ovation.

Said Bengals safety Jessie Bates: “He’s going to be the face of this franchise for a very long time.”

Sports Today – Which teams have the most to prove heading into March?