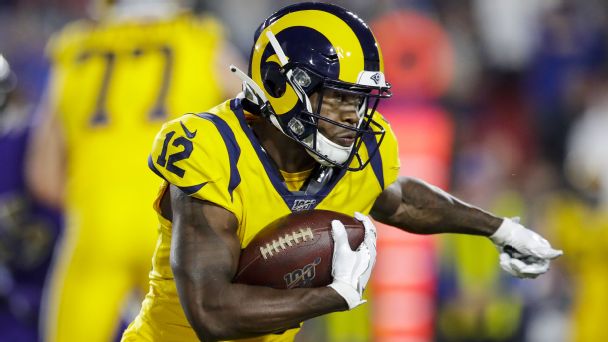 Navy‘s Malcolm Perry once went from eating Twizzlers in the stands to playing quarterback on a 90-yard drive. So going from record-setting option quarterback to the NFL draft as a wide receiver might not be that hard.

In September 2016, Perry enjoyed tailgating before the Midshipmen’s season opener against Fordham and marched into the stadium wearing his Navy dress whites. The plebe (a freshman at the U.S. Naval Academy) surely wasn’t going to play, given he was third on the depth chart and didn’t take any reps in practice that week due to an illness that caused him to be bedridden for most of the week.

Then, shortly before halftime, Perry heard his name being yelled. Where’s Malcolm?

“Oh, crap,” is what passed through Perry’s head, he later confessed to his mother.

Navy starting quarterback Tago Smith suffered a season-ending knee injury in the second quarter, which forced backup Will Worth into the game and sent an equipment manager scrambling through the bleachers to get Perry to the locker room. By the final seconds of the third quarter, Perry had put down his red licorice and was on the field, leading a length-of-the-field scoring drive and finishing with 30 yards rushing in a 52-16 victory.

Perry has always thrived on the fly. It comes from a military mindset of finding a comfort level during the most uncomfortable situations. That certainly fits his next mission: following the likes of Antwaan Randle El and Julian Edelman, both of whom successfully made the transition from throwing passes in college to catching them in the pros.

NFL officials were intrigued enough to invite Perry to the NFL combine in February after his remarkable final season at Navy, when he showed his toughness, intelligence and highly competitive nature. In guiding the Midshipmen to a school-record 11 victories, he ran for 2,017 yards, the most by a quarterback in FBS history.

Still, there are some concerns about his size. Perry is 5-foot-9, 190 pounds. Where he really comes up short is receptions. He has 22 career catches, most of which came as a sophomore slotback.

But Perry is one of the shiftiest playmakers in the draft. Niumatalolo calls him the best runner he has coached in his 13 years at Navy. The tape shows Perry sidestepping defenders, spinning out of tackles and cutting back across the field in order to reach the end zone.

“He’s a guy that’s got a unique skill set, and I’d love to see him get a chance,” DeCosta said. “I would expect him to make a team and be a contributor at some point. I think he’s going to be a great story.”

Long before Perry had NFL aspirations, he was an Army brat. His parents, Malcolm and Bonny, were longtime members of the 101st Airborne Division. They served in the Gulf War, rose to the rank of sergeant first class and combined for 40 years of service.

Perry grew up on an Army base in Fort Campbell, Tennessee. Every morning, he made his bed. Every day, he cleaned his room. It was a strict and regimented life, but it has been ingrained in him.

“I was pretty sure as a kid I would go into the military,” Perry said. “I even have some old stuff from elementary school where you write down what you think you’re going to be when you grow up. I always put ‘in the army.'”

To make sure he kept busy, Malcolm spent many weekends on his grandparents’ farm. He went four-wheeling, fishing and hunting. He rode tractors and horses.

One day while Bonny was washing dishes in the kitchen, Malcolm came in from playing and told her he was now good at football.

“They couldn’t catch me,” he replied.

Perry was repeatedly the fastest player on his team, and he soon became the top player in the area. A gifted runner who played quarterback, he was a two-time all-state selection in Tennessee and was twice named most valuable player in his county.

• Texans building intriguing offense
• Patriots have to rely on 2019 draft class
• Time for Packers to draft WR in first-round?
• Can Jags change luck with in-state picks?
• Sudfeld might land Eagles’ No. 2 QB gig
• Small-school studs for every team

His heart was set on lining up at running back for the University of Tennessee. But the service academies took the most interest.

In his first six starts at quarterback, Perry ran for 250 yards in the snow against Army, scored two touchdowns in a Military Bowl win over Virginia and totaled 289 yards of offense against Lehigh.

But consecutive losses midway through his junior season in 2018, including an ugly 35-7 defeat at Air Force, led to Perry getting moved from starting quarterback to slotback.

Niumatalolo still kicks himself for succumbing to the pressure of getting routed by Navy’s second-biggest rival.

“I kept telling my husband: He does not want to be quarterback because he didn’t have the self-confidence,” Bonny said.

The coaches knew Perry had to be questioning himself. Do they really trust me? Do they think I can’t do the job?

Perry never complained, though he could’ve easily done so. Navy lost seven of its eight games after the quarterback change.

Everything changed for Perry and Navy after losing to Army for a third consecutive season.

“The camera whipped to his face after the game, and I knew then exactly what he was feeling: ‘This is not going to happen again,'” his mother said.

On the weekends and after classes, Perry was out on the field, throwing passes and running drills. During practices, coaches had to tell Perry to relax and slow down. They eventually had to cut some of his reps.

Navy finished the season ranked No. 20, marking the second time in the past 56 years that the Midshipmen ended the season in the Associated Press top 20.

“He made everybody else better,” offensive coordinator Ivin Jasper said. “All of our deficiencies we had on offense, he made up for it with his legs.”

Perry’s most redeeming moment was carrying Navy to a win over Army for the first time in his career. He became the fourth quarterback in FBS history to rush for 300 yards, leading the Midshipmen to a 31-7 victory.

“He’s always been like that,” Bonny said. “Even in little league, if someone on that field made him mad, he’s not going to scream. He’s not going to talk trash. He’s going to make you pay. He’s done it his whole life.”

Perry can become just the 12th Navy player to suit up for an NFL regular-season game. But he has a recent example to follow.

Keenan Reynolds was selected in the sixth round of the 2016 draft by the Ravens, and he played in two games for the Seattle Seahawks in 2018. For Reynolds, the switch to receiver was more challenging because he played only quarterback in college. Perry has the advantage of having moved around to different positions, which means playing slot receiver, returner and special teams shouldn’t be a radical change.

“If there’s a comparison, it’s their competitiveness,” Niumatalolo said of Perry and Reynolds. “They’re both winners and they’ll do whatever it takes to win.”

Perry has certainly improved his chances. He impressed during practices for the East-West Shrine Game by extending his hands and catching the ball away from his body, which is not usually the case for converted receivers. At the combine, Perry showed soft hands during on-field drills but drew some criticism for having small hands (8½ inches).

If Perry is drafted, he would graduate from the Naval Academy in late May but not be commissioned as an officer. A new Department of Defense order allows athletes to defer their five-year service obligations until after their professional playing careers are complete.

Perry would become a second lieutenant in the Marine Corps after graduating as a quantitative economics major (it’s along the lines of solving analytical problems in areas such as weapons analysis and manpower studies). He completed the Leatherneck summer training course that involves four weeks of obstacle courses, combat instruction and infantry tactics on hikes of three, six and nine miles. In other words, it’s NFL training camp times 10.

“If football doesn’t work, a military career is definitely going to happen,” Perry said. “I want to serve my country.”

Perry’s immediate focus is reaching his dream of playing in the NFL. He described the transition to wide receiver as “a work in progress.” He has been gradually improving, and he is determined to fine-tune his route running.

He has been a winning college quarterback. He has been a prolific runner. Now, in a span of four months, he wants to establish himself as a wide receiver at the game’s highest level.

His mother once asked him: What position does he want to play the most?

“I don’t care if I’m playing center, as long as I’m on the field,” he told his mother. “Football is just in his DNA.”

Sports Today – From Siberia to South Florida: Inside Petr Yan’s...

Sports Today – Bowman shuffled to No. 48 to replace Johnson