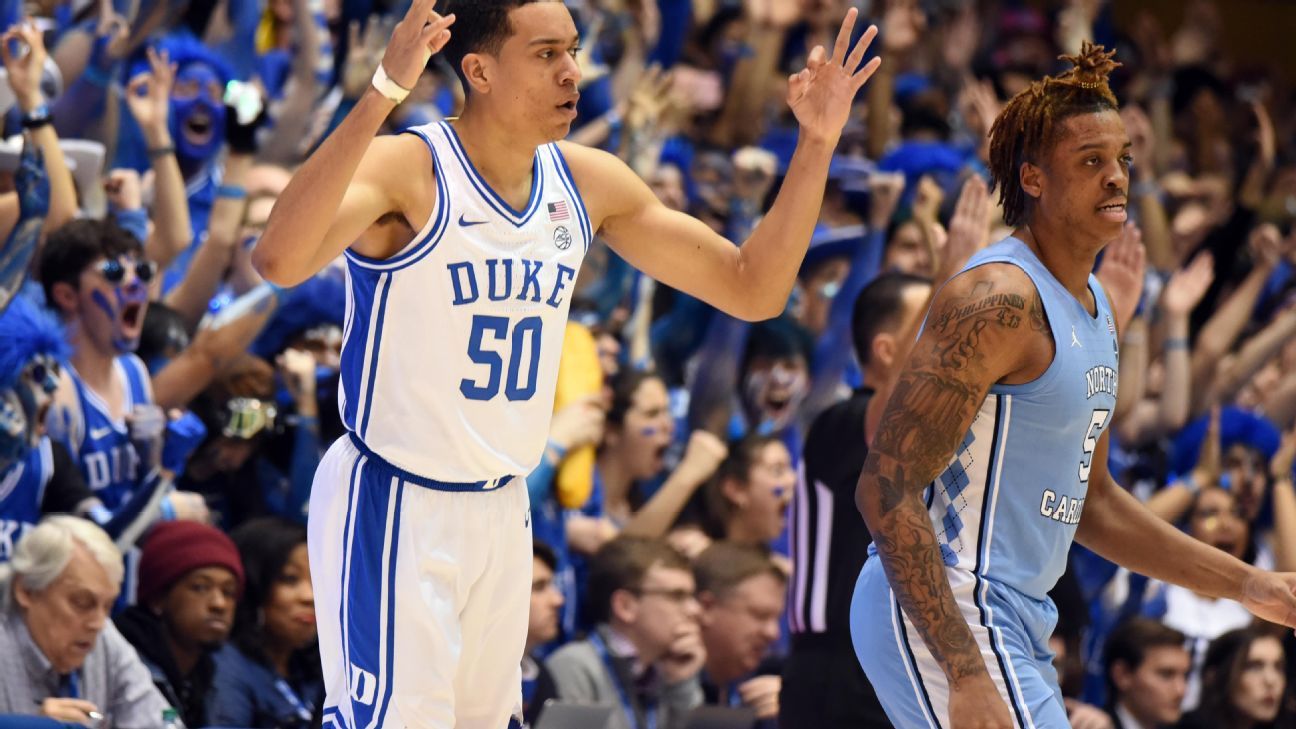 DURHAM, N.C. — The hard-working walk-on makes good in his final home game, electrifying the crowd and etching his name into the history books of a storied program.

That’s the real difference between Robinson, a walk-on as a freshman in 2016-17 and the son of NBA great David Robinson, and stories such as “Rudy.” The unheralded senior figures to be a big part of the Blue Devils’ run through the postseason.

Saturday marked the third straight game in which Robinson played significant minutes — 15 against Wake Forest, 14 against NC State and 25 against UNC — after rarely leaving the bench throughout his four-year career in Durham. He had 10 points and six rebounds Monday against the Wolfpack but turned in an even bigger performance Saturday in his final rivalry game against the Tar Heels.

Robinson was 4-of-6 from 3, including hitting one as the shot clock expired that halted a Heels’ run, and his work on the defensive end, including four blocked shots, helped stifle UNC on several fast-break opportunities.

“He had his fingerprints on every aspect of the game,” Krzyzewski said.

Robinson’s 23 points the past two games coincide with a turnaround of Duke’s fortunes. The Blue Devils had dropped three of four and tumbled in the rankings prior to Monday’s win against NC State. Last month, Duke needed a miracle finish to escape woeful UNC in Chapel Hill, but there was no such luck involved with this one, thanks in large part to the fast open to the action, sparked by Robinson, who started on Senior Night.

“There’s nothing like seeing a guy like J-Rob have a game like this in this moment,” guard Tre Jones said. “With the way J-Rob is playing now, it’s a boost, and it’s definitely a piece we needed during the stretch where we dropped a couple. We weren’t fighting like we used to. He gives us that boost.”

Duke enters the ACC tournament as the No. 4 seed in the league, and Krzyzewski said Robinson will likely be a factor in the rotation moving forward, a notion that Robinson, now a graduate student, said he didn’t quite believe was possible.

“But I took to heart the ‘Be ready’ and the staying ready,” Robinson said. “That’s something I learned my freshman and sophomore years, and I really took it to heart.”