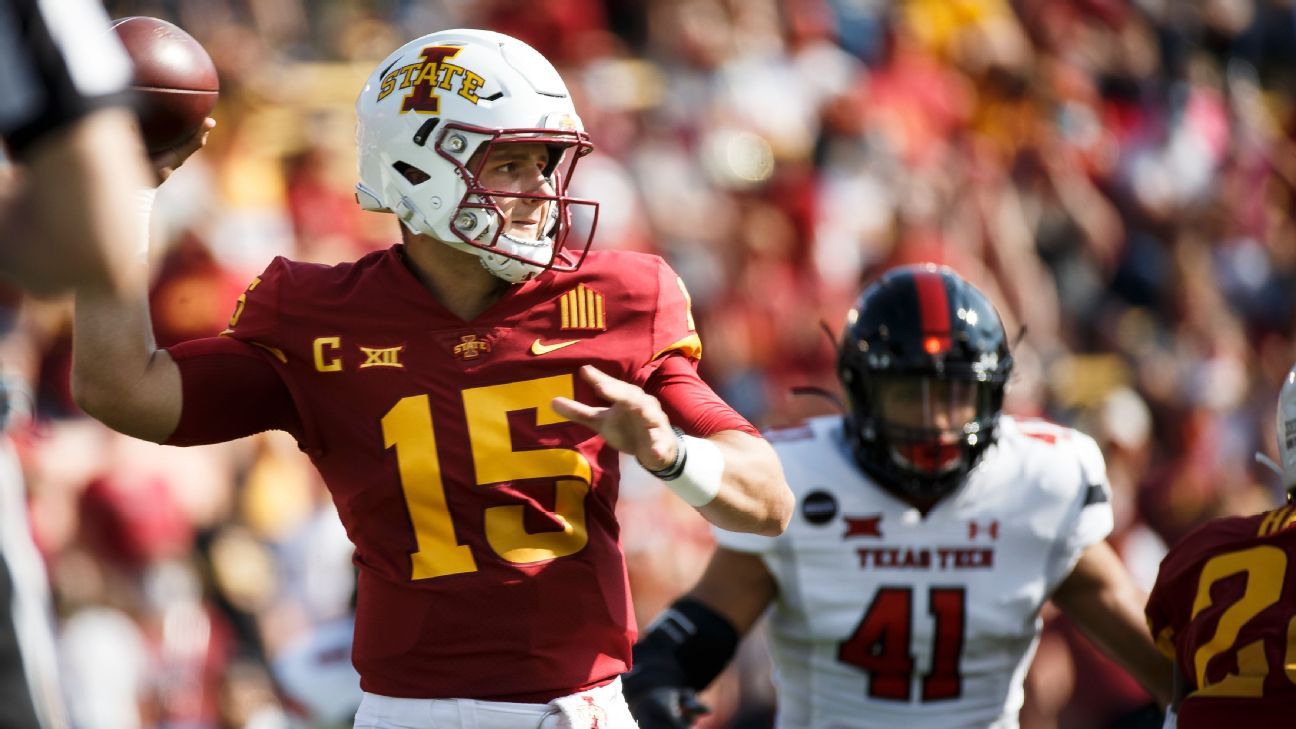 Alabama and Georgia look to be in control in the SEC.

Meanwhile, Iowa State is the Big 12’s team to beat right now. And will Clemson run away with the ACC once again?

Here’s a look at the hierarchy among the three Power 5 conferences that were in action this past week, along with our Group of 5 rankings:

It has been three weeks, and wouldn’t you know it, Alabama and Georgia are back running the SEC.

Ole Miss put a scare into the Crimson Tide and certainly prompted some questions of Nick Saban’s defense, but they survived and now we’re left to wonder who will stop Alabama in the West.

LSU has certainly fallen by the wayside. The Tigers were given a very favorable runway of Mississippi State, Vanderbilt and Missouri to start, and they still managed to stumble to a 1-2 record. What’s more, they gave up more points through their first three games (96) than any season in school history.

Auburn, on the other hand, is a mystery. It’s hard to trust those Tigers after what happened against Georgia a week ago and then needing a very questionable call to beat Arkansas with a last-second field goal at home.

Texas A&M already had its chance to beat the Tide and the Aggies lost by four touchdowns.

Speaking of the Aggies …

Who in the East is going to stand in the way of Georgia?

Florida looked to be neck-and-neck with Georgia a week ago, but then the Gators went on the road and lost to Texas A&M on a last-minute field goal and changed the complexion of that two-horse race. And somehow their defense is worse than LSU’s, giving up a whopping 100 points through three games.

Missouri, South Carolina, Vanderbilt and Kentucky are all below .500, so they’re out.

Which leaves Georgia standing somewhat alone atop the East and Alabama doing the same in the West.

And wouldn’t you know it, they get to play one another Saturday in Tuscaloosa and we’ll be able to say whom the front-runner really should be. — Alex Scarborough

Though most of the attention was on the Red River Showdown, one thing quietly became increasingly clear Saturday.

The Cyclones are 3-0 in league play after destroying Texas Tech. After already notching a win over Oklahoma and a road victory at TCU, the Cyclones are sitting pretty atop our latest Big 12 power rankings.

They aren’t the only unbeatens — Kansas State beat TCU without Skylar Thompson and the Wildcats are also unbeaten, as is Oklahoma State, which was idle. But the Cyclones have looked the best in the past three weeks.

Meanwhile, Texas’ tumble continues after the loss to Oklahoma. Neither team looked particularly great in the rivalry game, which was littered with turnovers and penalties on both sides, but Oklahoma has something to hang its Golden Hat on since it emerged victorious, while questions continue to be raised in Austin about the direction of the Longhorns. — Sam Khan Jr.

Trevor Lawrence throws for 292 yards and three touchdowns and Travis Etienne rushes for 149 yards and two touchdowns as Clemson goes on to defeat Miami 42-17.

If this past weekend proved anything, it is that the ACC is the same as it ever was: Clemson is elite, and everyone else is just trying to play catch-up.

Miami found that out once again in another dominant 42-17 Clemson victory. The Hurricanes came into the game with a different offense and a different quarterback but the same result: a disappointing performance against a clearly superior team. Nobody in the country has a duo like Trevor Lawrence and Travis Etienne, but add in a defense that clearly felt it had a statement to make and the Tigers were the clear aggressors right from the start.

So whom does that leave as the next best challenger to the ACC throne? It could very well be North Carolina, which finally saw its offense put up the big numbers everyone expected coming into the season, rolling up more than 650 yards in a win over Virginia Tech. Perhaps it is Notre Dame, which ran all over Florida State but made its own share of mistakes in a game that was closer than many anticipated.

We will have to wait a little bit longer to find out. But for now, there is no debating — Clemson is the class of the league, and will stay that way until proved otherwise. — Andrea Adelson

BYU QB Zach Wilson tosses a short pass to RB Lopini Katoa, who finds his way into the end zone for the touchdown.

If the rankings look familiar, there is a reason — they are unchanged from a week ago. With the top 10 either winning or having an open date, there was no need to shuffle anyone around — though there was nearly movement at the top thanks to BYU, which had to sweat out a 27-20 win over UTSA in the final minute.

We could see more drama this week, starting Wednesday when Coastal Carolina takes on Louisiana. Then Friday, SMU travels to Tulane and BYU goes to Houston. Saturday features a big game between UCF and Memphis with surefire AAC championship game implications. Cincinnati faces a road test of its own at Tulsa — the team that handed UCF its first loss of the season two weeks ago. — Adelson