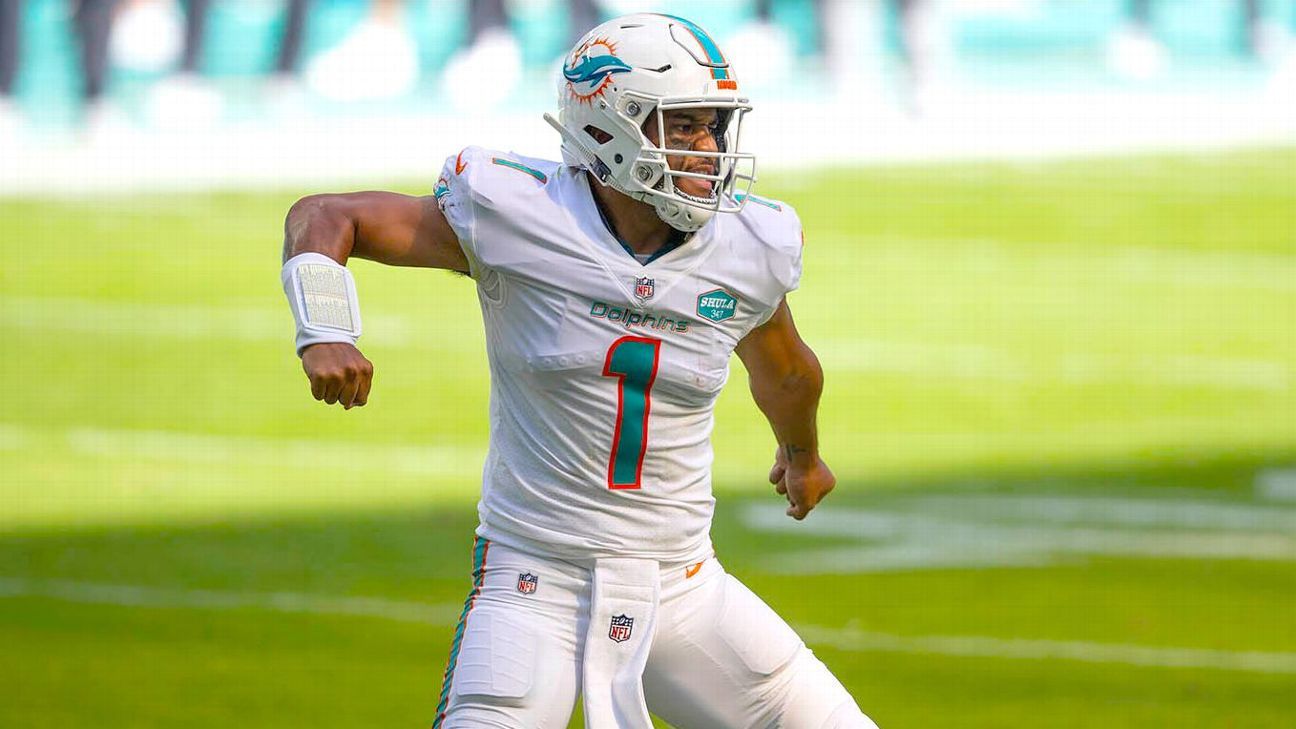 MIAMI GARDENS, Fla. — Dolphins quarterback Tua Tagovailoa walked off the field with a wide smile as his first NFL start ended with a comfortable 28-17 win over the Los Angeles Rams on Sunday.

Tagovailoa threw his first NFL touchdown, a tight-window, goal-line slant to wide receiver DeVante Parker, then he largely took a step back as his dominant defense and special-teams units carried the offense the rest of the way for a convincing victory.

Following a week in which all the talk was about Tagovailoa, the Dolphins’ defense forced Rams quarterback Jared Goff into four first-half turnovers, including one for a defensive touchdown, and speedy punt returner Jakeem Grant scored an 88-yard touchdown. It was a historic day of sorts for the Dolphins, who had a passing, rushing, special-teams and defensive TD in a game for the first time since Oct. 24, 1993, against the Indianapolis Colts.

“I don’t think I played to the standard of what this offense is capable of. There were certain plays where I could have stepped up and made the right throw, made the right decision. But it’s good that we still came out with the win,” Tagovailoa said. “Thank God we’ve got a good defense.”

Goff might have nightmares about Miami coach Brian Flores’ defense. The Dolphins pressured Goff on 21 of his 63 dropbacks (33%), tied for the highest percentage he has faced in a game this season (Chicago Bears in Week 7). Goff was 6-of-19 with two interceptions when under duress. The 19 attempts were tied for the most such attempts in a game in his career (Week 16 of 2019 versus the San Francisco 49ers).

“We won. We won the game. It’s a team football game. It’s not a one-man show. He made enough plays for us to win the ballgame,” Flores said of Tagovailoa. “Collectively, if we don’t play well in one phase, we have to pick each other up. It’s his first NFL game against a real good defense. You got to take that into account, as well. But the rest of the team picked him up, and we got the W.”

It was complete dominance by a Dolphins defense that devised unique pressure and confusing coverage drops that made Goff look baffled much of the game. The last time Goff led Rams coach Sean McVay’s offense against a Flores defense, it was a similar story: In Super Bowl LIII, Flores, then the New England Patriots‘ defensive playcaller, held the Rams’ offense to just three points. Flores accepted the Dolphins job days later. On Sunday, it looked like another example that Flores might have McVay and Goff’s number.

Andrew Van Ginkel scored on a 78-yard fumble return that was made possible by an Emmanuel Ogbah strip sack. A Shaq Lawson strip sack put the Dolphins at the Rams’ 1-yard line to set up a short Myles Gaskin rushing touchdown. Christian Wilkins and Eric Rowe nabbed interceptions. And Goff never looked comfortable all day as the Dolphins continued to send exotic looks his way.

As Flores added, “We applied some pressure. You want to make a quarterback feel you.”

Dolphins safety Bobby McCain made a point to go up to Tagovailoa during some of the offense’s struggles to say, “Don’t worry about it.” The defense picked him up.

The Miami offense’s 145 total yards were its fewest in a win since Week 14 of 2010 (131 yards vs. New York Jets) and fewest by a team to win by double digits since the 2006 Bears beat the Minnesota Vikings 23-13 with 107 total yards. But more than anything, it showed that the Dolphins have enough in their supporting cast to ensure Tagovailoa doesn’t need to be a superstar for this team to win.

As for Tagovailoa, he became the 22nd Dolphins quarterback to start a game since Dan Marino retired in 2000. Dolphins fans hope he will be the one to get it right. And if there’s one thing Tagovailoa showed Sunday, it’s that he can take some hard hits and move around well in his first significant action since a career-threatening hip injury on Nov. 16, 2019, while he was playing with Alabama.

It was a rocky start for Tagovailoa, headlined by a strip sack from Rams All-Pro defender Aaron Donald on his first dropback. He also was nailed by Rams defensive tackle Michael Brockers on the same play. It was his first significant hit since the hip injury.

“It was a good hit. It’s football. Tried to step up and make a throw. Aaron Donald swiped at the ball behind me. I don’t know who the guy was that took me off my feet and pretty much body-slammed me, but that’s football,” Tagovailoa said. “I’m not going to lie; I did enjoy getting hit that first time. That was definitely a welcome hit.”

Tagovailoa settled down toward the end of the quarter, when he led a touchdown drive that ended in that throw to Parker. He leaped for a hip bump with Parker and cradled the ball as he carried it to the sidelines. Tagovailoa said with a laugh after the game that he will be keeping that football.

That moment and that football will be the lasting image from Tagovailoa’s first start. He was mobbed with hugs on the sidelines by teammates, including Ryan Fitzpatrick, the veteran signal-caller whom he replaced.

Tagovailoa finished with 12-of-22 passing for 93 yards, one touchdown and zero interceptions. He is the first QB to win his first career start with fewer than 100 passing yards and 20-plus attempts since Donovan McNabb in 1999. Tagovailoa was rusty at times with some overthrows early on, before the Dolphins’ offense got conservative for much of the second half while sitting on its sizable lead. It wasn’t a showcase game for Tagovailoa, but the Dolphins picked up their rookie in guiding him to his first win.

“It was fun to be able to play a full, 60-minute game being that it was my first start in the NFL,” Tagovailoa said. “We faced a really good defense. I’m proud of what we got to do offensively, and I know there’s still plenty of things that we need to correct.”

The scene for Tagovailoa’s first start was written like a Hollywood script. Marino watched from the sideline as Tagovailoa and the offense warmed up before the game. Tagovailoa shared a warm hug with Fitzpatrick before his first snap, then jogged onto the field, where he was met with a standing ovation and notable cheers from the socially distanced fans at Hard Rock Stadium.

The Dolphins (4-3) jumped out to a 28-7 halftime lead over the Rams (5-3) even as the offense finished with 54 yards, the fewest total yards by a team to score 28 first-half points in the past 40 seasons. But that gives Tagovailoa and the Dolphins something to work on this week as they savor their first week and rising above .500 for the first time since Week 15 of the 2018 season, after their Miami Miracle win over the Patriots.

“They showed a lot of mental toughness this week with the QB change,” Flores said. “There were a lot of things going on other than football, and those guys put that aside and played well.”

Hacked! – What Are the Steps of the Nitrogen Cycle?

Sports Today – Diggins-Smith ‘conflicted’ on bubble, but not ball