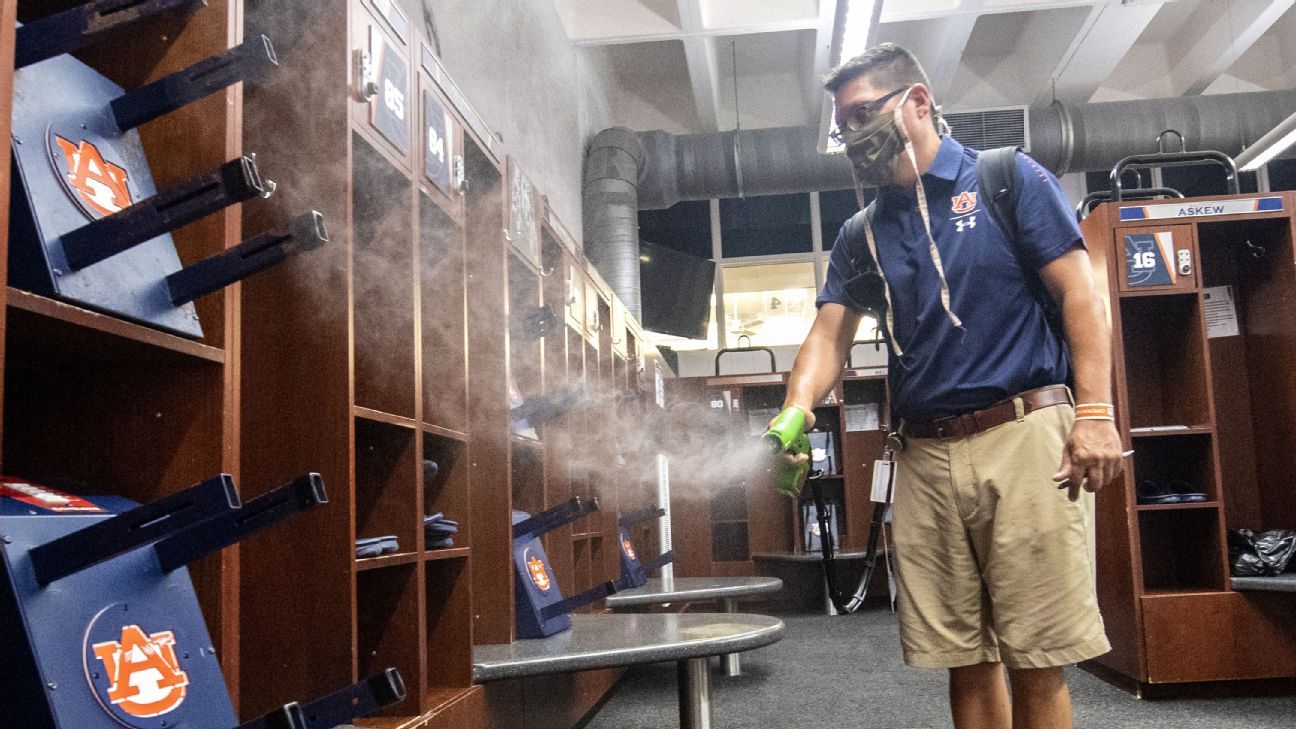 I think referee Bob Johnson spoke for everyone last Saturday night when he uttered the first words heard from an official during a college football game in this godforsaken, expletive-not-deleted 2020 season.

Nothing reverberates quite as loudly as a decidedly unsolemn oath over the loudspeaker of a 25,000-seat stadium with 23,000 empty seats. Johnson confirmed what most of us had begun to figure out: COVID-19 college football will be different from the previous 150 years of the sport.

One of the charms of college football is that, even if the teams at the top don’t often turn over, the players constantly do. No one season is ever quite like the previous one. But this season? Some conferences are playing, some are not. Some fans will attend games, most will not. The game will sound different, and not just because of unusual comments from the person in the white hat. The official’s whistle, that shrill product of air and oscillating sound waves that has punctuated college football games since time immemorial, has gone the way of leather helmets.

“You put that whistle in your mouth and you’re blowing spittle everywhere,” said Steve Shaw, the national coordinator of football officials. “Just [from] the health view of going to your mouth a hundred-plus times during a game, we recognized that traditional whistles would have to go.”

Officials this season are using an electronic whistle, initiated by touch. They won’t hold it in their hand — too much danger of an inadvertent whistle. Instead, they are attaching the whistle to their belts. During Central Arkansas’ 24-17 win against Austin Peay last Saturday, Johnson and his crew learned they had to lean on the button a little longer than if they were blowing the old whistle. In the first half, Shaw said, the coaches and the ESPN broadcast crew had trouble hearing it. The officials adjusted at halftime, and Shaw put out an advisory this week suggesting that a second official press his whistle, too, to make sure everyone understands the play is over.

It’s hard to believe anyone had trouble hearing what sounds like a swarm of angry cicadas.

“I wanted to hate it,” Shaw said. “I played around with it. It’s really not bad.” Mrs. Shaw begs to differ. Jamelle banned the whistle’s use in her house, working from home be damned.

The game is going to look different, too. Those classic blue-and-gold (and occasionally green) Notre Dame uniforms will carry an ACC logo. It’s not adding a soul patch on the farmer in “American Gothic.” But it’s … different. The coaches on the sidelines will be wearing masks. As we saw (and heard), the officials are wearing masks, too. There is no national requirement for the players to wear masks — it’s hot enough inside a helmet in the late summer — but they still might be wearing more equipment than they once did.

The goal is to stage a closely fought game with the appropriate social distancing. If that sounds physically impossible, you’re onto something. That’s why the stands won’t be filled even halfway, if they are filled at all.

You know those medical tents that have appeared on many sidelines in the past few years to keep prying eyes away from doctors, trainers and injured players? Syracuse trainer Tim Pike said more assessments will now be done in the Carrier Dome training room. In the Orange medical tent, three’s pretty much a crowd.

“We’ve got to be really stringent on making sure we keep those evaluations concise, try not to have that potential petri dish,” Pike said. “Maybe sometimes we don’t use the tent. When we know it’s going to be a longer evaluation, we know we need to go to the locker room, the training room, where we have better ventilation. We’ve got to be cognizant. We can’t do every single thing like we know and we’ve done in the past.”

The NCAA extended the sideline team areas from 50 yards to 70. Or, to be more precise in an era when we are supposed to remain 6 feet apart, from 150 feet to 210 feet. Within the Boston College team area, there will be yard markers on which players can stand and watch the game.

No one has suggested that the neutral zone at the line of scrimmage be extended to 6 feet. Yet. But Shaw said he and the conference supervisors took apart most of the rules of the game and inspected them for COVID-19 readiness. The coin toss, typically attended by four captains per team, honorary captains, a cameraman, a sound guy and heaven knows who else, will now consist of one captain per team, the referee and the umpire. That’s it. The coin, presumably, will be sanitized.

More important, though, is a virus-free football. What is that? How do you define it? Shaw spent weeks looking into it.

“We went through, ‘Do we need to throw the football out every play? Every series?'” Shaw said. “Where we ultimately got to is that the NCAA medical [advisory] group believes there’s probably a pretty low risk that a leather football would transmit COVID-19. And on top of that, the schools already have put in place their processes, whatever system they use to disinfect the football. So we’re just going to let the schools keep that. If they kick one in the stands, and they have fans, you know how sometimes in the student section it takes us a while to get a football back, those are ones we probably ought to throw out and have disinfected by the team.”

After Auburn practices, Marquez said the balls and ball bags will go into an ozone chamber to be sanitized. That bag will be filled and zipped shut until it returns to the field for the next practice. The Auburn equipment staff, like most across the country, has been working much longer hours during the pandemic. Take laundry. In the pre-pandemic era, a “load” — 10 machines washing the practice gear and towels after football practice — took 2½ hours to wash, dry, fold and distribute. This year, it takes 5½ hours.

“It seems like anything they touch, we have to wash,” Marquez said. “We called our laundry company and said, ‘Hey, we have to make sure all of our hoses have been replaced and we have to get ready to do a massive amount of laundry this year.'”

No longer is there a bin of clean towels on the practice field, with every player extending his sweaty hand to grab a new one. Each player gets a weightlifting towel and practice towel assigned to him. All those laundered towels then must be individually sorted and distributed. Every piece of laundry that comes out of the dryer goes into the ozone chamber for 32 minutes to be sanitized. Last year, Marquez’s staff washed 3.1 million pounds of football laundry. This year, the staff already has washed 2 million pounds, and the SEC season is three weeks away.

Tailgating will be curtailed, at least tailgating as the parking lot Mardi Gras we have come to know and love. Ditto for pregame rallies. Texas A&M is moving its Midnight Yell practice online. That just might break the internet in Brazos County. Virginia Tech announced this week that there will be no tailgating at Lane Stadium and said all Hokies fans should “homegate.”

The ACC clamped down on pregame activities on the field, too. Among conference teams, only the driver of the Georgia Tech Ramblin’ Wreck, the 1930 Ford Model A Sport coupe that leads the Yellow Jackets on the field, and Chief Osceola, who rides the Appaloosa horse Renegade to do the same for the Florida State Seminoles, will be allowed to continue their traditions.