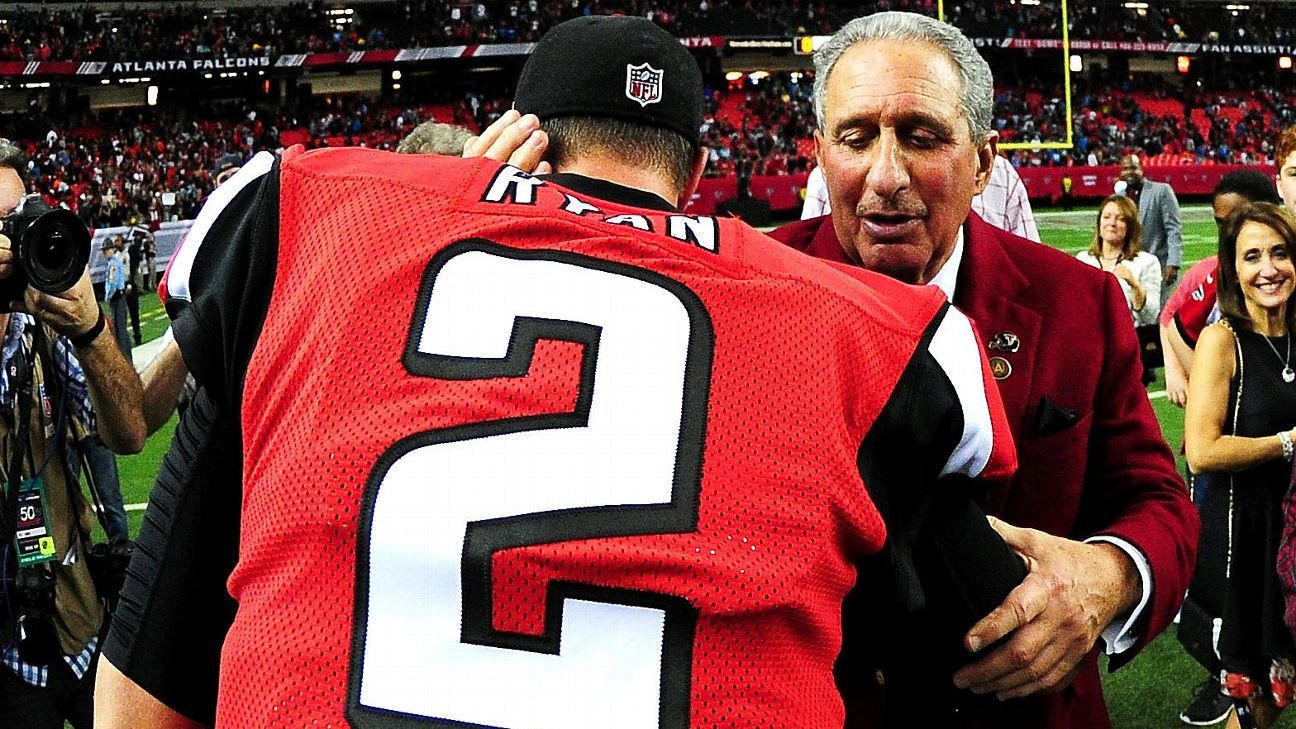 Although Atlanta Falcons owner Arthur Blank expressed admiration for Matt Ryan, he did not fully commit to the one-time MVP as the quarterback of the future as the franchise searches for a new head coach and general manager.

Blank addressed the media Monday and was asked if the 35-year-old Ryan is the quarterback into the future.

“I love Matt, much like I love Dan, I love Thomas,” Blank said. “Matt’s been a franchise leader for us, great quarterback; one of the leading quarterbacks in the last 13 years in the NFL. I hope he’s going to be part of our plans going forward. But that will be a decision that I won’t make.

“Matt has the ability to play at a very high level, even at this age. Whether that’s going to continue or not, I’m not sure. I appreciate his willingness to consider doing that and the level at what he’s played for us for 13 years, which has been incredible. So we’ll have to see. But then again, that’s going to be a decision, at the end of the day, that part of it will be up to the player; part of it will be up to the coaching staff. And whether or not Matt can keep himself together. God willing, he’ll be able to do that and play at the level that he’s capable of playing at.”

Blank did not use his typical phrase of “Falcon for life” while discussing Ryan. Meanwhile, Ryan told ESPN last year he wants to play into his 40s.

“I think, No. 1, I’ve got a long way to go until I get there,” Ryan said. “But if you can stay healthy and you’re still playing at a high level and all those things, I don’t see why not.”

Ryan, who signed a five-year, $150 million extension in May 2018 that included $100 million guaranteed, has three years and $74.75 million left on his deal. He’ll count $40,912,500 against the 2021 cap for now, although the Falcons restructured his contract twice over the past year to create cap space and probably would have to do the same again to enhance the roster next season.

The Falcons have not given any indication of plans to part ways with Ryan, although they did interview top quarterback prospects Joe Burrow and Tua Tagovailoa before this year’s NFL draft as “due diligence,” according to Dimitroff.

McKay was asked if there are plans to trade high-priced veteran players due to the team’s projected tight 2021 salary-cap situation.

“No,” McKay said. “Last year, we made one trade [Mohamed Sanu to Patriots for a second-round draft pick]. And it was a trade that we thought was in the best interest of the player. It was definitely in our best interest, we thought. And we executed that trade.

“If somebody came to us with a trade for a player and it made sense to us — it was in that player’s best interest, our best interest and we could do it — would we consider it? Maybe. That’s something we would look at. But this will not be a situation where we’re going to predetermine the roster for the next head coach and general manager. We’re going to let them come in, let them evaluate this roster, let them see the moves they want to make.”

McKay went on to say there are a lot of highly paid players on the roster who significantly affect the salary cap. However, McKay believes the salary cap always “is something that you can maneuver around.”

Right now, the Falcons have six players scheduled to absorb more than $136 million in cap space next season: Ryan, wide receiver Julio Jones ($23.05 million), defensive tackle Grady Jarrett ($20.83 million), left tackle Jake Matthews ($20.21 million), pass-rusher Dante Fowler Jr. ($18.67 million) and linebacker Deion Jones ($12.63 million). Whether the Falcons intend to do a full rebuild appears to depend on how the new coach and general manager view the returning roster. Blank said the talent on the roster right now is better than the 0-5 record indicates.

As for Ryan, he admitted not performing up to expectations this season. He hasn’t thrown a touchdown pass in the past two games and threw a costly fourth-quarter interception in the end zone during the Falcons’ 23-16 loss to the Carolina Panthers on Sunday. Through five games, Ryan has completed 129 of 204 passes for 1,472 yards with seven touchdowns, three interceptions and a passer rating of 90.2.

The third overall pick in the 2008 draft, Ryan currently sits ninth on the all-time passing list with 52,658 yards.

Sports Today – With so much on the line, calls growing for French Open...

Hacked! – 5 Sites Every Online Shopper Must Visit for Trusted Recommendations

Sports Today – What were the Packers and Eagles thinking? Barnwell explains the NFL...