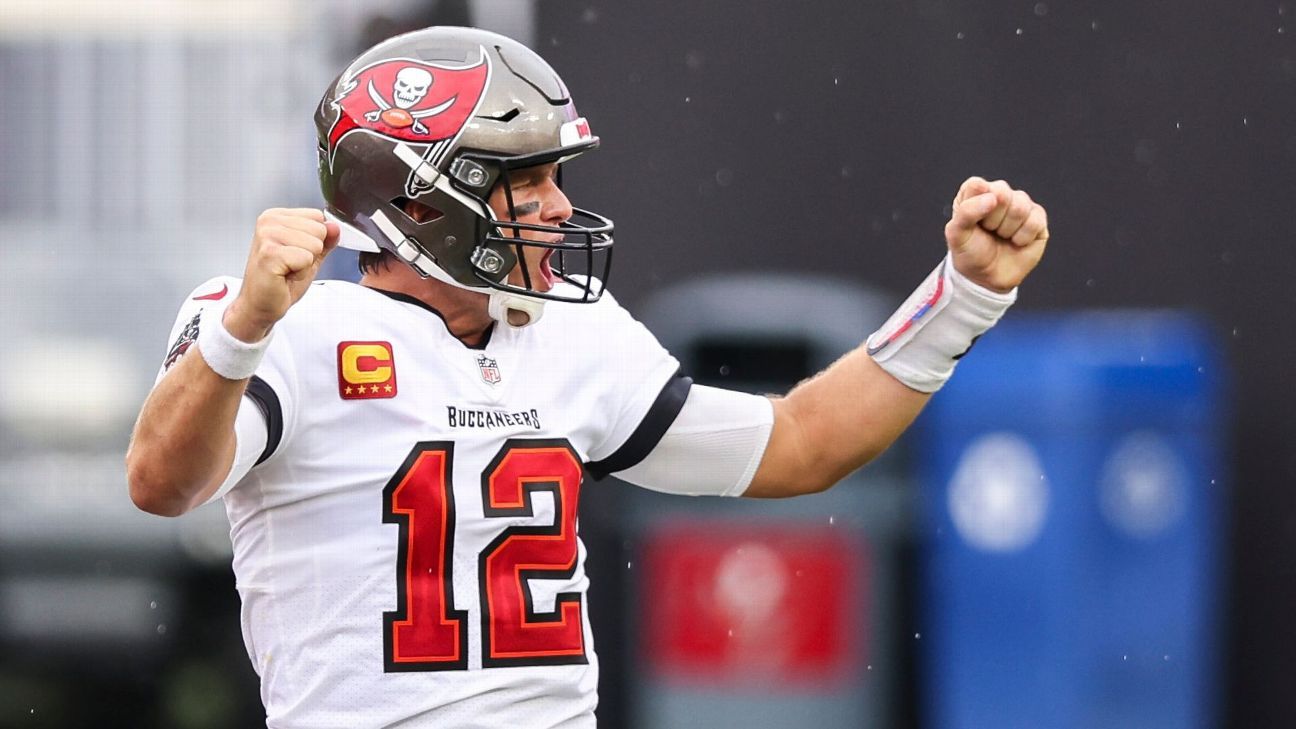 Week 4 of the fantasy football season featured plenty of notable performances around the NFL on Sunday. What should we make of them? Matt Bowen and Tristan H. Cockcroft are here with analysis on the biggest performers — and duds — of the week.

Judging by the returns in the first 3.5 weeks of the season, it didn’t seem possible that Brady could rally in the fashion that he did in Week 4. Despite missing Chris Godwin and Leonard Fournette, both of whom were hurt, additionally losing Mike Evans, O.J. Howard and LeSean McCoy for portions of the game, and throwing a pick-six, Brady orchestrated a 38-31 comeback win against a very good, albeit injury-ravaged, Los Angeles Chargers defense. Brady completed four touchdowns during the second half alone, resulting in 32.5 fantasy points, his best single-game total since Week 3 of the 2017 season (35.7). Maybe it’s the turning point in his season, though it’s important to point out that he has a similarly challenging assignment against the Chicago Bears in Week 5. Brady has inched himself back towards the top 10 fantasy starters for next week, but I’d be more all-in for his Week 6 game against a bad Green Bay Packers secondary. — Cockcroft

Tristan, the Bucs established some rhythm in the pass game during the second-half on Sunday, and they attacked vertically, scheming-up the Chargers defense. For me, that’s a really positive sign for Brady given how disjointed this Tampa Bay offense has looked to start the year. — Bowen

He didn’t merely set a career best with 42.1 PPR fantasy points, he obliterated his previous best of 30.6, set in Week 17 of 2019, and scored nearly 15 more points than he did in Weeks 1-3 combined (27.2). Mixon hadn’t been hurting for opportunity, his 59 touches entering the day tied for eighth-most in the league, but a combination of tough matchups, a chest injury of his own and injury absences of some of his offensive linemen — but not necessarily all three factors within the same game caused him to average a miserable 0.46 points per touch. Game flow had a lot to do with the performance, as Mixon touched the football 31 times — 25 rushing attempts and a perfect 6-of-6 catching his targets — but he also looked like a much better runner in this one, converting 34- and 23-yard carries for touchdowns. The Bengals’ struggles seem to hold Mixon back from being a true, locked-in top-10 fantasy running back every week, but he has both the talent and volume to warrant it. — Cockcroft

Big changes could be coming to Cleveland’s backfield

Nick Chubb scored 4.3 fantasy points on six rushing attempts before exiting the game late in the first quarter after he had his leg rolled up upon while pass blocking. Considering he required assistance getting off the field, his knee injury is one of the major concerns exiting Week 4, as he is due for an MRI exam. Should Chubb miss extended time, Kareem Hunt, who has 69.7 PPR fantasy points this season on 58 touches spread across only 88 snaps (plus today’s count that remains pending), would see a boost to his usage and potentially reach the RB1 rankings tier. It’s likely that D’Ernest Johnson will be used a decent share as a rusher, making him one of the Week 5 top pickups, but Hunt would get the most fantasy-relevant boost in the event of a Chubb long-term injury. — Cockcroft

With two touchdowns today, along with five receptions for 79 yards, Lamb should be a weekly play as a WR3 in a Dallas system that will continue to throw with volume given their sub-par defense. Lamb has now seen at least six targets in every game this season, and the Cowboys are also manufacturing touches for the rookie on screens and jet sweeps. — Bowen

Agreed, Matt, and while I think some might worry about Lamb’s mere 14% target share (26-of-198), that 198 Cowboys team target total tells a lot of the story. Lamb is on pace for 104 targets, which is plenty for him to make a WR3 impact, and he’s still one of my favorites of the 2020 rookie wide receiver class from a year-over-year perspective. — Cockcroft

Yeah, Herbert missed on the late game interception throw. It looked like he sailed that ball into zone coverage. However, the rookie was pretty dialed-in today versus the Bucs, completing 20-of-25 passing for 290 yards and three touchdowns – which included an absolute rocket ball off play-action on a 72 yard score. The arm talent is jumping here, and he’s throwing the ball with efficiency in this Chargers offense. We see Herbert as a matchup dependent QB2, but the ceiling is climbing here for the rook. — Bowen

In this era of mobile quarterbacks, it’s no longer uncommon to find passers who succeed from a fantasy perspective quickly at the NFL level. Still, Herbert has now scored 59.9 fantasy points in his first three career starts, which places a respectable 19th since at least 1950, and he has done that despite only 10.7 of them coming from rushing plays. — Cockcroft

As if Chubb’s injury wasn’t enough, the Chargers lost Ekeler to a hamstring injury, and one that required him to be carted off the sidelines. In Ekeler’s absence, Joshua Kelley ran nine times and Justin Jackson six, though it’s important to remember that the opposing Buccaneers are one of the toughest defenses against the run and the Chargers’ offensive line played poorly. Kelley is the guy I want if Ekeler’s injury is a long-term one, and he’s an absolute top add in the 43% of ESPN leagues in which he remains available. Keep this in mind: Kelley has 6-of-9 goal to go rushing attempts for the Chargers this season, so the team already seemed to trust him in key situations. — Cockcroft

Odell Beckham Jr., WR, Cleveland Browns: Beckham lit up the Dallas defense today for 154 total yards – and three touchdowns – on just seven touches. It started with the gadget call on the reverse pass from wide receiver Jarvis Landry for a score. Attack the safety there. He also ripped off a 50-yard touchdown run on a reverse. I thought the play speed of Beckham really jumped today, and the Browns did scheme touches for him. However, in a run-heavy Cleveland offense, Beckham will stay as an upper-tier WR2 in my ranks heading into a Week matchup versus the Colts. — Bowen

Mike Davis, RB, Carolina Panthers: Until Christian McCaffrey is back on the field for Carolina, you can roll with Mike Davis as a solid RB2 in the lineup. Look, he’s getting the volume in Joe Brady’s offense, and we are seeing that he can make an impact in the pass game. Over the last two weeks, Davis has registered 202 total yards – on 42 touches – with two scores. And he’s caught 13-of-15 targets for 72 yards. Davis gets the Atlanta defense in Week 5, a favorable matchup for the Panthers running back. — Bowen

DK Metcalf, WR, Seattle Seahawks: Metcalf is going to hang around that WR1/WR2 line in PPR formats. But if you play in a Non-PPR league, Metcalf should be locked-in as a WR1 given the vertical pass game in Seattle, plus his explosive play traits after the catch. After posting 104 yards receiving – on four grabs – in Sunday’s win over Miami, Metcalf has now produced at least 92 yards receiving in every game this season. And his route tree continues to grow in this Seahawks offense. — Bowen

Kenyan Drake, RB, Arizona Cardinals: Was he Week 4’s biggest disappointment? We shall see when the week’s returns are fully in, but with a 15.5 PPR fantasy point ESPN projection, Drake’s 3.5 points on 13 touches, all of them rushing attempts, has to be considered a top candidate, considering the opposing Panthers entered having allowed 128.5 points to opposing running backs, second-most in the league (Las Vegas Raiders, 133.5). He got three of the Cardinals’ four rushing attempts in goal-to-go situations, getting stuffed on the one chance he had at the goal line, and failed to record a run of 10 yards. Worse yet, Drake exited the game on the final drive with an injury, and while initial indications were that it isn’t serious, it casts some doubt upon his status as even an RB2 for Week 5 against the Jets. It’d be a wise move to add Chase Edmonds, just in case. — Cockcroft

Mark Andrews, TE, Baltimore Ravens: This was a bounce-back week for Andrews after a couple key drops in the Monday night loss to Kansas City. The Ravens tight end caught three passes for 57 yards – with two touchdown grabs on high-red zone throws from Lamar Jackson. And, really, that’s the area of the field where Andrews usually cashes in. Seams and over routes when Baltimore is controlling the tempo of the game. — Bowen

Justin Jefferson, WR, Minnesota Vikings: In his last two games, the rookie has caught 11-of-14 targets for 278 yards. Run the over routes off play-action, win the isolation matchups. And with an upcoming Week 5 game versus a Seattle defense that has struggled to limit pass game numbers, Jefferson will jump into WR2/WR3 mix. — Bowen

Antonio Gibson, RB, Washington Football Team: Gibson posted season-highs in touches (17) and total yards (128) on Sunday in Washington’s loss to Baltimore, which included goal line carries and scripted targets in the pass game. Gibson has now scored a touchdown in three straight games, and the volume is increasing to fit his versatile traits at the position. Consider Gibson a RB2 in the Week 5 matchup with the Rams. — Bowen