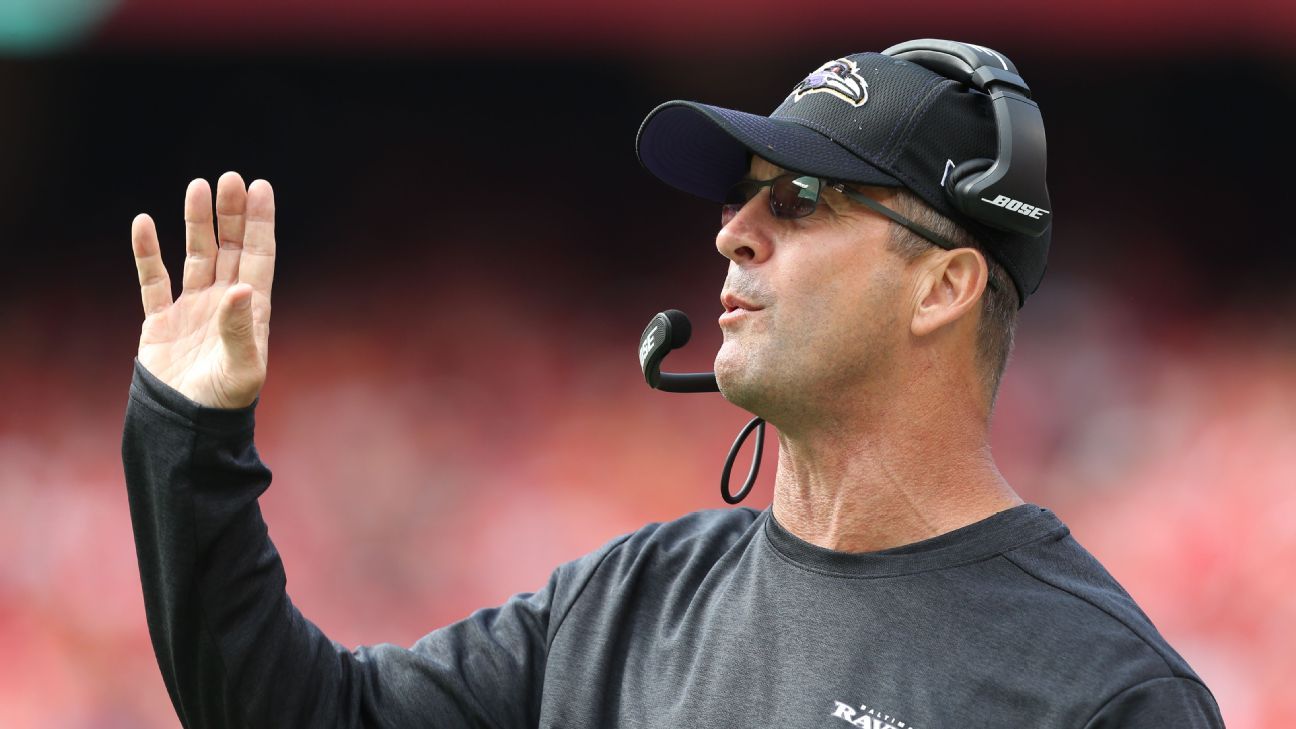 OWINGS MILLS, Md. — Baltimore Ravens coach John Harbaugh said Friday that he hasn’t heard from the NFL office after lowering his face covering to argue with an official during Monday night’s 34-20 loss to the Kansas City Chiefs.

The NFL Referees Association complained about the incident to NFL executive vice president of football operations Troy Vincent, according to NFL Network.

“I understand that we’re all chasing perfection,” Harbaugh said Friday. “We try to be as perfect as we can. It’s a pretty hard standard to hold other people to. But you try to do the best you can. That’s all I really have to say about it.”

Attempts to reach the NFL Referees Association have been unsuccessful, and the NFL declined to comment.

The NFL has issued strong warnings to coaches who don’t wear masks on the sideline during games, threatening suspensions and forfeiture of draft picks as punishment for failing to comply with COVID-19 game-day protocols, according to a league memo obtained Wednesday by ESPN’s Adam Schefter.

Five head coaches — the Raiders‘ Jon Gruden, the Saints‘ Sean Payton, the Broncos‘ Vic Fangio, the Rams‘ Sean McVay and the Seahawks‘ Pete Carroll — have already been fined by the league for not wearing masks on the sideline during games.

In the first quarter of Monday’s game, Harbaugh was seen lowering his neck gaiter while yelling in the face of line judge Mark Steinkerchner about a tripping penalty on tight end Nick Boyle.

On Wednesday, Harbaugh praised how the Ravens have followed the league’s mask protocol through the first three games when asked about the incident with the official.

“I don’t think there is anybody better than us, me or our staff, from the beginning of the game to the end of the game,” Harbaugh said. “To think in a three-hour, heated, competitive environment, especially when you’re yelling, that your mask isn’t going to fall down for 5 to 10 seconds, I don’t think anybody could be held to that standard.”

During games, officials have regularly lowered their masks when talking among themselves.

Sports Today – From testing to prize money, the biggest takeaways from the PGA...

Hacked! – Polio Doctor Jean Macnamara’s Work Reminds Us That Viruses Can Be Vanquished

Trending – Ruby Rodriguez says her sister is ‘weak but stable,’ asks people to...