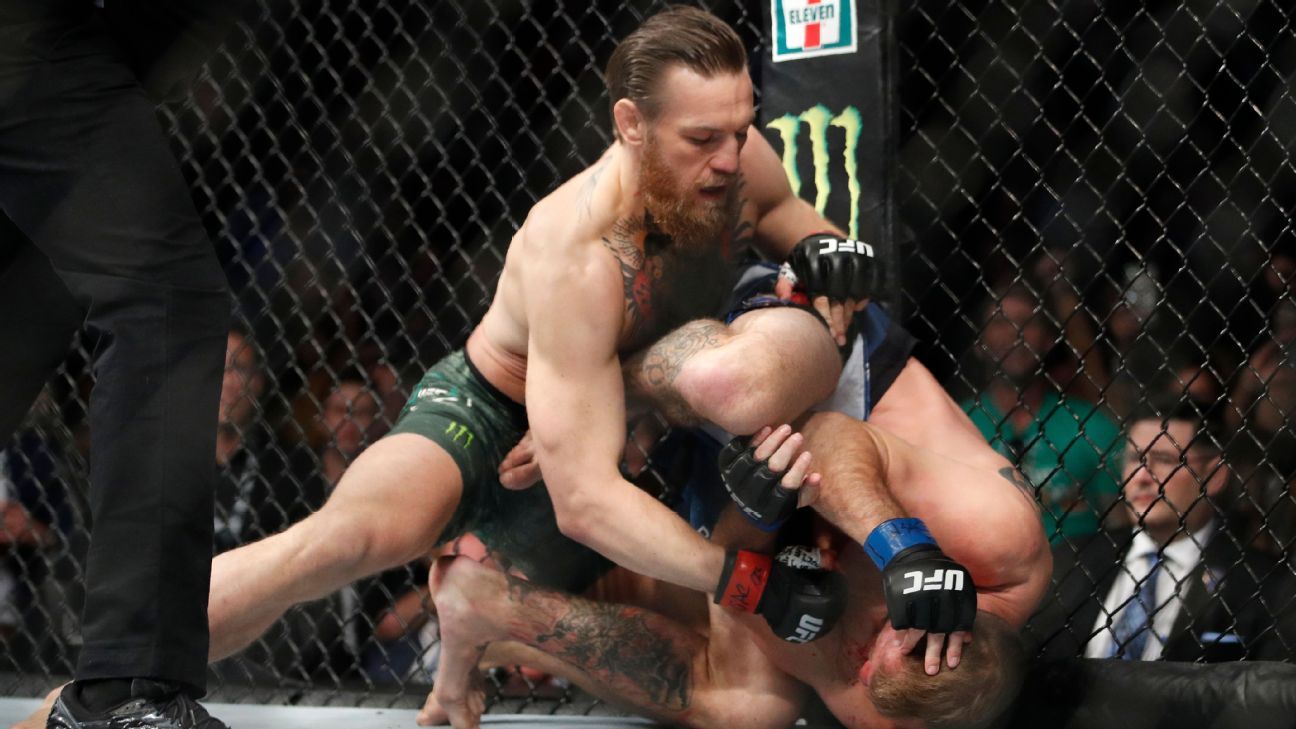 The Ultimate Fighting Championship is in the midst of its longest hiatus in eight years (36 days).

If this hiatus lasts two more weeks — which it is expected to, given Dana White’s plan for fights to resume on May 9 — it will be the promotion’s longest in 13 years.

In case you were wondering, you’d have to go back to 1994, when the UFC was less than a year old, to find the organization’s longest break, which was the 182 days between UFC 2 and 3.

Although we have a ways to go before that record is broken, it speaks to the fact that this company doesn’t like to take extended breaks.

With that in mind, I thought it would be interesting to look at a few burning questions in MMA right now. Because let’s be honest, when the fights resume, they are going to come fast and furious. As I said on Monday’s DC & Helwani show, I suspect the UFC will run multiple events per week, several out of the Apex in Las Vegas, to get to its 42 contracted events this year.

Here are a few questions that come to mind, in no particular order, along with my thoughts:

1. Will the promotion tempt fate by booking Tony Ferguson vs. Khabib Nurmagomedov for a sixth time?

I say yes. The fight is even bigger now.

2. Will Daniel Cormier be able to hold off retirement to get one last fight in?

This is a hard question to answer because we just don’t know how long this break will be. Cormier said Monday that if they book him to fight in Vegas, he is prepared to move his family there, so he isn’t throwing in the towel just yet. I say he waits it out and gets that last fight in.

3. Will Leon Edwards be passed over for Tyron Woodley vs. Colby Covington?

I don’t think it would be fair to Edwards, but I think we are trending in that direction.

4. Will the UFC really put on multiple events during the week once it is able to run events again?

5. Is Tony Ferguson really planning to make weight on Friday?

Yes, as of right now, that is his plan. Why? Because he’s Tony Ferguson.

Still TBD, but I wouldn’t be surprised if it rented out a private location and put on multiple events there to make up lost ground. That promotion doesn’t have the luxury of its own arena, like the UFC does, but Bellator is owned by Viacom, so finding an empty lot shouldn’t be too hard.

7. Will Conor McGregor get his three fights in this year?

Again, it’s hard to predict, but I’m going to say yes. This means a lot to him, and I suspect he’ll be booked right away when business resumes. If all goes well, he’ll turn around quickly so that he can say he stayed true to his word.

8. Whom will Jon Jones fight next?

First, if you’re waiting for Jones to be reprimanded by the UFC for his latest arrest, stop. It’s not happening. Next, it has to be Dominick Reyes again. Hopefully this break gives everyone the clarity they need to recognize that’s the biggest fight possible for Jones.

Part of me thinks it wouldn’t be fair to Aldo to take his title shot away. After all, this wasn’t his fault. However, he should never have been given this title shot to begin with. The biggest fight possible is Cejudo vs. Dominick Cruz. Yes, I know Cruz hasn’t fought in four years, but the storyline is great. If not Cruz, Cejudo’s next opponent should be Petr Yan, Aljamain Sterling or Cory Sandhagen (in that order of preference).

Henry Cejudo says he’d like to have a conversation with the UFC if he is to fight on May 9 so he can peak at the right time.

10. Will the UFC run it back between Deiveson Figueiredo and Joseph Benavidez?

This never made sense to me. Yes, Figueiredo missed weight, but Benavidez took the fight and got knocked out. Why run it back right away?

Yes. This is a simple one to answer. Nothing else makes sense.

I think? Honestly, Korean Zombie is a big winner in all of this because the hiatus gives his surgically repaired eye time to recover. Heck, Volkanovski gets a little more time to repair his wrist, too. However, in the end, I think the UFC sticks with Volkanovski vs. Holloway, which was the original plan for June.

13. Speaking of running it back, will Zhang Weili and Joanna Jedrzejczyk do so right away?

The longer this hiatus goes, the more likely I think that is.

This month marks the 10th anniversary of one of the most fun stretches I’ve ever had covering MMA.

I spent a few days in Toronto hanging with the great Mauro Ranallo. I even watched the NCAA tournament championship with him in his apartment. That was quite the experience. I went to The 6 because I was traveling with members of The Score television network, based in Toronto, and colleagues from the site I worked for at the time, AOL FanHouse, and we went to Abu Dhabi to cover UFC 112. What a time that was. It was the first outdoor UFC event. Anderson Silva acted a fool in the main event. A fuming-mad Dana White talked to us afterward, resulting in my first video interview to generate more than a million views on YouTube. I’ll never forget that trip. The food was tremendous.

Then we flew back to Toronto. We spent a day or two there to recap the event and then flew to Tennessee for Strikeforce: Nashville. You remember that event, right? That’s the one where the Diaz brothers got into a postfight brawl with Jason “Mayhem” Miller after their bud Jake Shields beat Dan Henderson in the main event. I’ll never forget walking into the news conference after the event and seeing Strikeforce CEO Scott Coker sitting on the dais, waiting for the media to come in. For some reason, he had decided to arrive early. I asked him if he had seen the brawl, and he said he hadn’t.

But the highlight of that trip was my postfight interview with Muhammed Lawal. Strikeforce let us go into his locker room after he beat Gegard Mousasi to become the light heavyweight champion. Lawal was lying on the ground because his legs were so banged up, and he became emotional while talking about what the win meant to him. That remains one of my favorite postfight interviews.

I then flew home, only to go to Sacramento, California, a couple of days later for the lone WEC pay-per-view. That was a tremendous card, highlighted by Urijah Faber vs. Aldo. But the highlight for me might have been the Q&A session with Chael Sonnen the day before the event. Remember, this was just two weeks after his rival, Silva, embarrassed the company in Abu Dhabi, so Chael had a field day with that disaster of a showing. He was on fire that day.

Three organizations, three weeks I’ll never forget. That was a fun time in our sport.

Hollywood Today – Jameela Jamil Reacts to ''Ridiculous'' Claims About Her Friendship With Meghan...