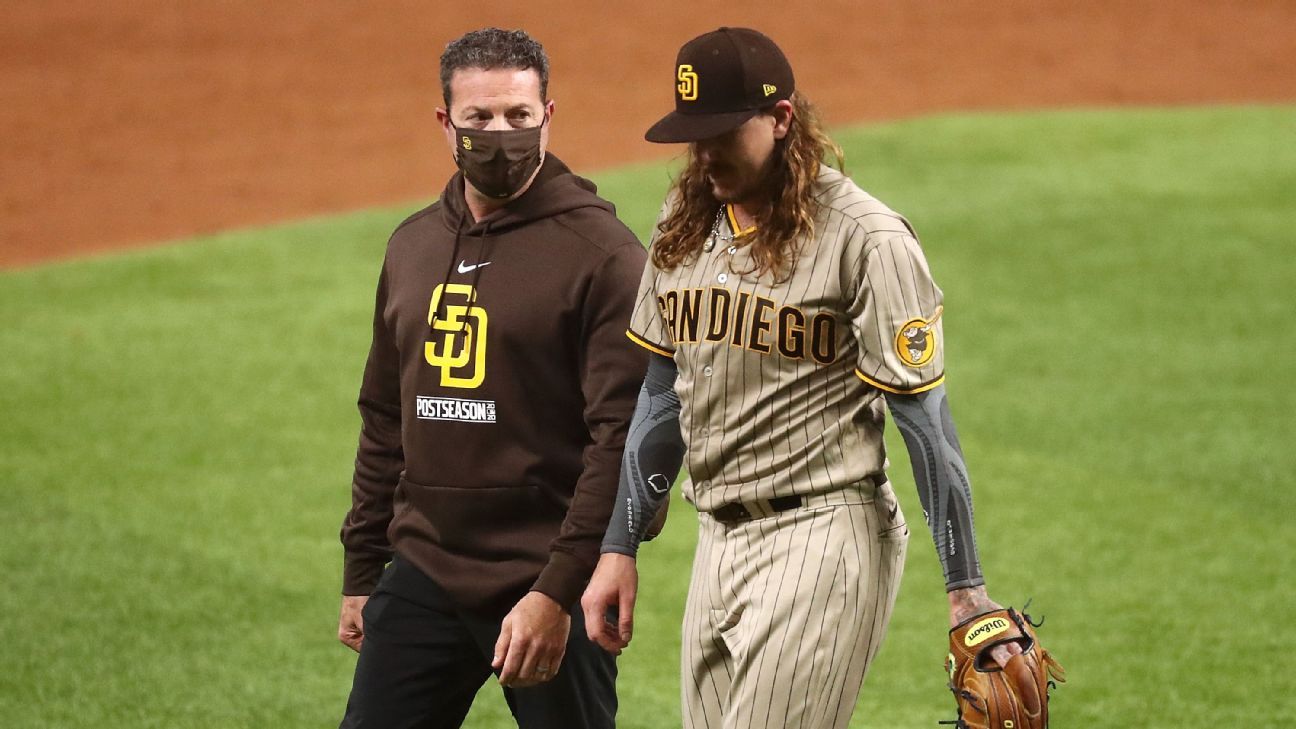 ARLINGTON, Texas — Mike Clevinger was replaced on San Diego‘s playoff roster on Wednesday because of his elbow injury, a move that would keep him from pitching again this postseason, unless the Padres make it to the World Series.

That also would depend on whether his ailing right elbow is healthy enough to get back on the mound in October. The right-hander went only two pitches into the second inning of the National League Division Series opener against the Los Angeles Dodgers on Tuesday night.

San Diego made the switch before Game 2 of the NLDS, adding right-hander Dan Altavilla to its 28-player roster. Altavilla was immediately available.

Clevinger, who joined San Diego in a nine-player trade with the Cleveland Indians on Aug. 31, left his final regular-season start on Sept. 23 after one inning because of an elbow impingement. He was left off the roster for the first round against the St. Louis Cardinals.

The Padres didn’t announce until Tuesday, hours before the start of the NLDS, that Clevinger was going to be on the 28-man roster and start Game 1.

Rookie manager Jayce Tingler, speaking to reporters earlier Wednesday prior to Clevinger was taken off the active roster, said the pitcher had “a warrior-type attitude and spirit” and wanted to be back on the mound for Game 1 after being cleared by doctors.

The herky-jerky right-hander walked two and threw a wild pitch in a scoreless first inning against the Dodgers on Tuesday. His velocity was noticeably down when he threw two balls to start the second, and he left the game after a visit from Tingler and a trainer.

Clevinger said afterward he started feeling discomfort facing his second batter of the game. When the first inning ended, he went into the tunnel to try several ways to loosen up the elbow in what became an extended time as the Padres loaded the bases without scoring.

San Diego also is without Dinelson Lamet, its other top starter. The right-hander left his final start of the regular season on Sept. 25 because of biceps tightness, and he has been left off the active roster for both postseason series so far.

In the wild-card round against St. Louis, the Padres became the first team to use at least eight pitchers in three consecutive playoff games. They employed eight relievers after Clevinger exited the NLDS opener, making it the third time in four games and matching the postseason record for using nine pitchers in a nine-inning game.

Sports Today – Dodgers fans have taken over ‘neutral’ site with L.A. one win from a World Series title

Sports Today – Dodgers fans have taken over ‘neutral’ site with...