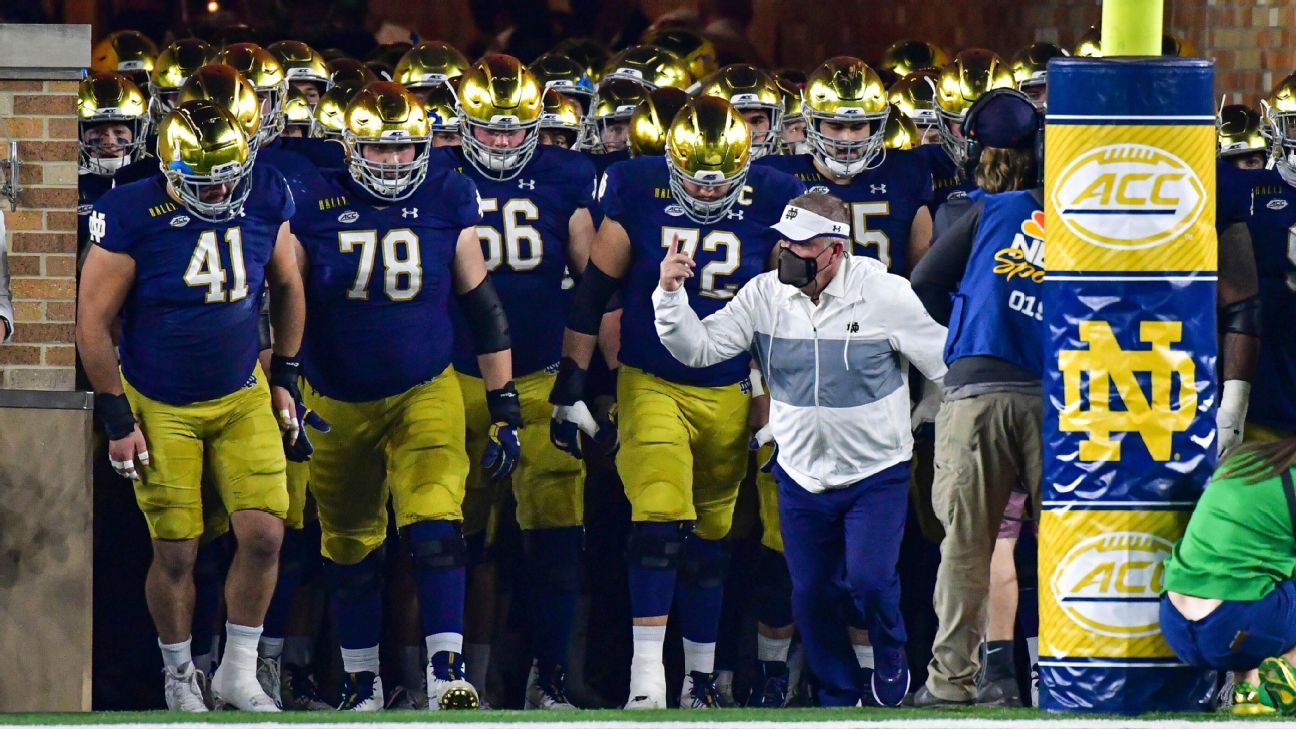 Notre Dame coach Brian Kelly said Friday if the Irish are chosen to make the College Football Playoff, they would consider not playing if families are not allowed to attend the semifinal game.

During a Zoom call previewing the ACC championship game, Kelly made pointed remarks about the need to have families attend the games.

The issue of attendance at the semifinal sites came to the forefront this week, after the College Football Playoff said it expected to keep one of the sites at the Rose Bowl, as scheduled.

The problem with that site in particular is that Los Angeles County public health director Dr. Barbara Ferrer told ESPN last month that sporting events, including pro and college football, will “remain spectator-free” after the county announced a stay-at-home order.

Kelly said he would be in favor of the Rose Bowl being moved to another site entirely.

CFP executive director Bill Hancock said earlier this week they are hoping that the state of California will ease its COVID-19 stadium restrictions and allow players’ families to attend the game in Pasadena, California.

“Maybe they [CFP] need to spend a little less time on who the top 4 teams are and figure out how to get parents into these games because it is an absolute shame and a sham if parents can’t be watching their kids play,” Kelly said. “My kids have been on campus since June. They haven’t seen their families very much at all. They’ve had to fight through COVID, some of them have had COVID. They can’t be around their families for Christmas, and you’re going to tell me we’re going to have a playoff and maybe one site can have families and the other can’t? Please.

“Somebody’s got to wake up in that room and figure this out or you might as well call this the professional league. I am so sick and tired of this playoff committee talking about having sites where you can’t have parents at and their families. It’s ridiculous.”

Kelly said the ultimate decision about what to do would come from his players.

“The players, they drive this,” Kelly said. “I don’t drive it. I’m echoing their concerns. I’m not the guy out there making this up because it’s not about my family. It’s about their family, so I’m a voice for our team, and they’re concerned. They’re focused on the ACC championship. That’s where their focus is. They’re not going to be speaking about these things.

“But, if in fact we’re selected to be a part of it, this will then be No. 1 on their radar, so then I’ll have to address it with our leaders as to how they feel about this.”

Kelly said Notre Dame athletic director Jack Swarbrick has been involved in conversations as part of the CFP management committee and has made their position clear.

As to why the game has not been moved out of California with CFP selection day set for Sunday (12 p.m. ET, ESPN), Kelly said, “We’re worshiping the ashes of tradition. That can be the only reason.

“Nobody’s going to trade out this year for next year. Next year’s going to be a revenue producing year. I’m not in that meeting. I can’t imagine what push has been applied, but they’re not thinking about the student-athlete, and that’s the issue. I’m just making it clear that if our team is selected, the next issue will be let’s make sure that the student-athletes get their families in to watch them play.”

Hollywood Today – A Haunted Set and a Soundtrack That Spoiled Everything: 20 Fascinating...