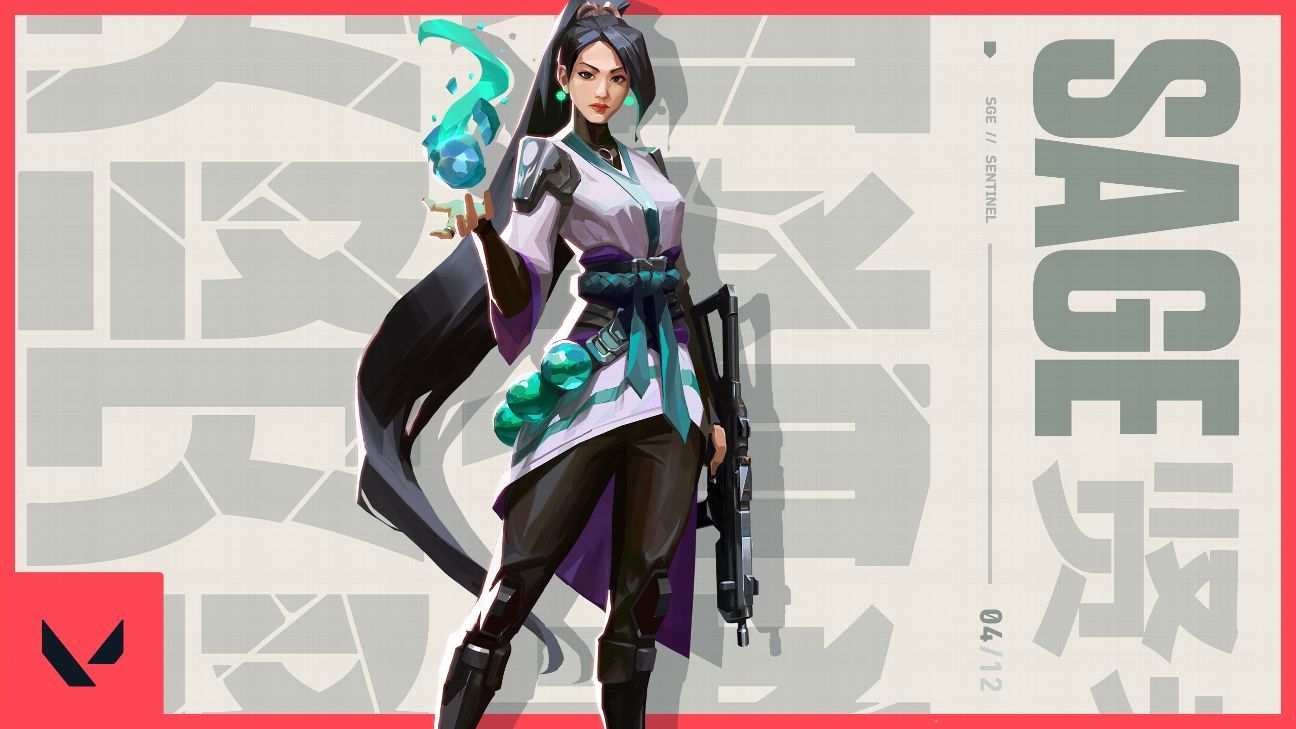 With any new game like VALORANT comes a learning curve, frustrating moments and calls for nerfs. New mechanics (or old ones repackaged for a new experience) get called out as overpowered while other skills seemingly feel underwhelming.

We’re here with some knee-jerk reactions after the first few days of VALORANT’s beta.

Kwilinski: I love Sage. In a game that is focused on precision aiming and timing, Sage breaks the mold and allows you to make an impact even if you don’t fire a round.

And that’s a problem.

Her wall is the single most useful and round-altering skill in the game at the moment. It can reshape the map for a significant amount of time, and the amount of bullets needed to break it is substantial (and trying to break it just gives away your position).

Her heal is also an issue. You, theoretically, are making it a 6v5 (or 7v5 if you heal early enough and get the skill off cooldown) if you have a Sage on your team since her heal can bring you from 1 health all the way back up to 100. I don’t mind the healing, but there’s not a ton of counterplay to that, so I’d lower the amount she can heal per round.

Erzberger: I’m glad VALORANT introduced us to the 10th Wonder of the World: Sage’s wall. I can agree with the wall duration time or dealing with how much damage it needs to break down. There’s nothing worse in the game so far when you’re against a Sage player who actually knows how to use the agent and knows how to properly set up choke points that make it impossible to enter a site.

The healing, though? I’m fine with it. I want VALORANT to go down the road of Dota 2, where I’m OK with ridiculous abilities and spells as long as everyone else in the game has one or two of those in their arsenal as well. With how quickly you can lose health in this game and no real armor outside of the store-bought shields, the healing doesn’t feel as broken as I thought it would be.

The wall can go, however. Healing is part of Sage’s personality and overall kit. The wall doesn’t fit her skillset in the same way for me.

Rand: Sage has so many components to her kit that considering how she would potentially be nerfed is a multilayered discussion that players will disagree with depending on their own in-game experiences with her. Did you get sealed off for too long (either accidentally by a teammate or purposefully by an opponent)? Was their best player resurrected only to mow you down and then pose over your dead body? Have you been plagued by opponents being healed and similarly mowing you down at inopportune times?

Any nerfs to Sage will be targeted around whatever the developers feel is the most overtuned, but by design, Sage is an agent that every team composition wants, regardless of whatever other four agents are on that team because she’s so valuable as the only healer and the only agent with a resurrection ability. Her kit is such that it’s a bit broken by design, and I’m unsure as to how any adjustments would eliminate her necessity.

Kwilinski: Or they could just leave her alone because she’s awesome. Still, I agree that every team wants a Sage. It feels like when you don’t have her and the other team does you are at a disadvantage.

Kwilinski: Big surprise. I also love Raze, so this hurts me, too. Remember how VALORANT is built on precision? Yeah, Raze says no to that with three abilities: Boom Bot, a roaming roomba of death; Paint Shells, a cluster grenade; and Showstopper, a rocket launcher.

Boom Bot is fine (It’s so cute!), and Showstopper is pretty slow if shot at range, so really, it’s Paint Shells that need a tweak.

Paint Shells has a lot of uses — you can halt rushes, finish off foes in corners, clear sites. It’s a powerful tool that does significant damage in a large area. Riot’s Ryan “Morello” Scott wrote on Reddit about what the developers intend Raze to be and how to play with/against her. “The high damage is meant to *threaten* you more than kill you, forcing you to move positions into a disadvantaged engagement. For the small space it controls compared to something like Sova’s dart, Breach’s Flashpoint or Phoenix’s curveball, we had to make it impossible to ignore so she could flush out predictable positions.”

Still, I feel they could either keep the area of effect the same but reduce the damage, or lower the AOE but keep the damage.

Erzberger: I’m going to agree with this proposed change. In a game that is about gunplay, you don’t want abilities to be so key to one character’s overall damage. Like you said, ultimates like those of Raze and Brimstone do humongous damage, but the counterplay is there with the ramp-up speed. A lot of times, those huge ultimates are more important for setting up positioning or clearing an area more so than actually grabbing a kill. I think Raze is an interesting character and seems to have a lot of potential in terms of creativity, so I don’t want that gutted, but the grenades should at least be monitored by the development team.

Rand: I’m also going to agree with my peers here regarding Paint Shells, mainly because I’m actually terrible at this game but felt like I could poke out well with Raze without ever having to enter a gunfight. In a game that is (in most cases) all about gunplay, that really shouldn’t happen.

I’ll also add that it’s the combination of Raze’s abilities that will make her so dangerous at high levels of competition. I haven’t seen instances of this myself (yet), but the Blast Pack/Showstopper combination will be incredibly overtuned in the hands of someone who is actually good at this game.

Erzberger: I honestly think Phoenix is in a perfect place. Don’t touch Phoenix. Please, VALORANT developers, if you’re reading this, just move along and keep going about your day. You’re doing an amazing job.

Kwilinski: Tyler, he’s broken. There’s just way too much packed into his kit. He’s a one-man wrecking crew. Since when did Duelist mean John Wick? He has two heals, a self-rez, flashbangs and line-of-sight blocking. His counterplay is to kill him twice when his ult is up, or nearly kill him twice if he uses both heals on himself.

Kwilinski: It appears I’ve been outvoted.

Kwilinski: Just give him his cool mask. That’s all.

Erzberger: Where is the mask?! In promotional photos and even in his graffiti, Breach is wearing what should be his iconic mask. But in the actual game, the mask isn’t anywhere to be seen. Am I missing something here? Is there some underground lore that we’ll learn about this mask when the game launches? Give Breach his mask.

Kwilinski: Viper can be a lot of fun, but you need to play around her abilities to maximize her potential. Her wall can be tricky to utilize on defense, making for 50-50 situations, and while you can pick up and redeploy her Poison Cloud, it can be dangerous to do so.

But what really hurts Viper is her ultimate, Viper’s Pit. While inside, all players, friend or foe, take damage over time. It’s small, but it impacts armor and health until you’re eventually reduced to one hit point. This is not fun to play with if you have a Viper who dropped her ult on the B bombsite on Haven.

For friendlies, the toxin should reduce health at a slower rate, allowing for teammates to feel a little more comfortable moving through the cloud at a slower pace rather than rushing through.

Erzberger: This is Viper’s Pit. This isn’t Viper and Friends Pit. I actually like that her skills damage your teammates because it seemingly fits with Viper’s character. I like the idea of having an agent with an ultimate that shows off a me-versus-everybody attitude. Some of the most heart-pumping moments so far in VALORANT’s short lifespan have been Viper by herself in 1-on-3-or-more scenarios where she slinks into her pit of poison and takes on all comers.

Rand: I actually don’t mind Viper’s Pit for a lot of the reasons that Tyler mentioned. Yes, it does mean that you’re going to have teammates who accidentally hurt and/or kill you, but that can happen with most agents. Just yesterday one of our ESPN Esports colleagues (not in this roundtable) who shall remain nameless, murdered me accidentally with Phoenix friendly fire. Viper is one of those agents who I think has a higher skill floor, but I think once people figure her out, we’ll suddenly be complaining about how overpowered she can be.

Rand: Due to the value of vision in a game such as VALORANT, buffing a character like Sova can be dangerous. In fact, despite my thoughts that he’s lackluster compared to what the game seems to want him to be, Sova’s drones aren’t all that great. Again, due to the nature of vision, I’m unsure as to what specific buffs developers could apply, but right now, parts of Sova’s kit just don’t feel as fun as they could be for a tactical archer.

Kwilinski: I don’t find Sova that interesting from any standpoint, and I think giving his drone some love would help carve out that “bow and arrow vision agent” they are going for. His Shock Arrow is pretty underwhelming from what I’ve seen so far as well, but I’m more concerned about how they tap into his intel gathering side rather than the damage side. He’s supposed to be the hunter, right?

Hollywood Today – Guess Who This Little Cutie Turned Into!

Hacked! – How to Pair Your Apple Watch to a New iPhone

Sports Today – How the Minnesota Timberwolves are responding to the death of George...