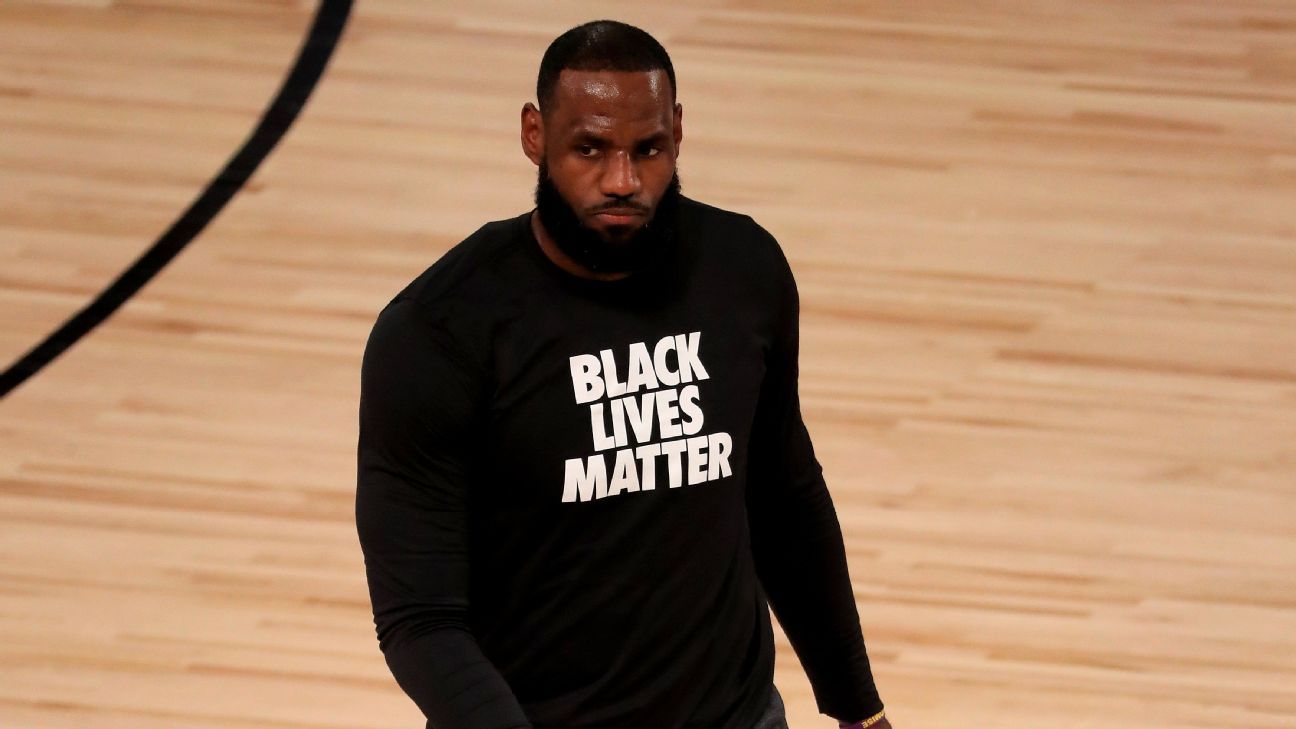 LAKE BUENA VISTA, Fla. — In the wake of the shooting of Jacob Blake, Los Angeles Lakers forward LeBron James said that the way the police conduct themselves makes him afraid to be a Black man in America.

“I know people get tired of hearing me say it, but we are scared as Black people in America,” James said following the Lakers’ Game 4 win over the Portland Trail Blazers on Monday. “Black men, Black women, Black kids, we are terrified.

Blake, a Black man, was shot seven times by police in Kenosha, Wisconsin on Sunday as he tried to enter the driver’s side door of his vehicle. Officers were responding to a domestic disturbance. Video of the incident, shot from a window across the street, was distributed on social media and shared by Blake’s attorney, Ben Crump.

“If you watch the video, there were multiple moments where if they wanted to, they could’ve tackled him. They could’ve grabbed him. You know? They could’ve done that. And why, why does it always have to get to a point where we see the guns firing?”

James mentioned how Blake’s three children — ages 3, 5 and 8 — were in the car, a fact corroborated by Crump. “It’s in broad daylight,” James said.

He also wondered aloud if the shooting would have ever have received national attention if not for the citizen filming the encounter and pointed out the lack of bodycam footage from the responding officers. Kenosha mayor John Antaramian told reporters Kenosha police were budgeted to add bodycam equipment in 2022. Antaramian was unsure if the dash camera on their police car was recording at the time of the shooting.

“Quite frankly, it’s just f—ed up in our community,” James said.

James former teammate, George Hill of the Milwaukee Bucks, questioned Monday if the NBA deciding to restart its season in Orlando, Fla. amidst the social unrest that became a national conversation after the killing of George Floyd, a Black man, by a white Minneapolis police officer, Derek Chauvin, in May was a prudent decision.

“We shouldn’t have even came to this damn place, to be honest. I think coming just here took all the focal points off what the issues are. But we’re here, so it is what it is,” Hill said, referring to the NBA bubble. “We can’t do anything from right here, but I think definitely, when it’s all settled, some things have to be done.”

James said he “didn’t have any reaction” to Hill’s statement. “Everyone has their opinion and reaction to what happened,” James said. But he made it clear that he believes he can both compete in the NBA playoffs and be an agent for positive social change at the same time.

“I still have a job to do because I’m here. Because I committed. And when I commit to something, I feel like I have to come through. That’s just who I am,” James said. “But that does not mean that I don’t see what’s going on and I won’t say anything or continue to use my platform, continue to use my voice and continue to uplift all of the other athletes to let them know that they can say and do what’s right and not fear what other people’s opinions are.”

James mentioned the nonprofit organization, More Than A Vote, that he launched in June along with a collection of Black athletes and entertainers in order to energize Black votes and thwart voter suppression as an example of the work that can be done while still fulfilling his day job as a basketball player at the ESPN Wide World of Sports Complex.

The New York Times reported Monday that More Than A Vote is raising millions of dollars, in collaboration with the NAACP Legal Defense Fund, in order to pay more poll workers to facilitate voting in Black electoral districts in November’s general election. The hope is to identify and incentivize young people to work at the polls to not put elderly poll workers at risk while the COVID-19 pandemic persists.

“I hope I can continue to uplift my community, uplift communities all over America, uplift the Black community,” James said. “It’s not like it’s going to happen tomorrow. But being organized and having a plan and keeping our feet on the gas pedal is something that we’ve got to do.”

James’ team echoed his sentiment, devoting their postgame remarks to the broader issues that served as a backdrop to Blake’s shooting.

“Our main focus is on social justice and we are lucky to have a ton of guys who are public figures like Bron, (Chris Paul), all these guys who are always on the forefront and speaking out and able to kind of guide the younger guys and stand up in the right direction and kind of follow their lead,” said Anthony Davis. “We are fortunate as an organization to have one on our team who loves to go out there and put his foot forward and we kind of just follow his footsteps and kind of make sure we’re doing the right things as well.”

Lakers forward Kyle Kuzma turned his attention to the tactics used by the police officers.

“Quite frankly, it’s disgusting to have multiple cops around and not even thinking about [using] a taser, and forget about the taser, [not thinking about] just simple combat and taking a man down instead of trying to shoot him,” Kuzma said.

James said that that fear exists in the Black community because of the seeming pattern of excessive force by the police.

Blake is in critical condition. James and others on the Lakers wished him a full recovery.

But after the spate of violent incidents involving the police and Black citizens — Blake, Floyd, Breonna Taylor and others — the Lakers also wished for better police training and gun control.

“I think firearms are a huge issue in America,” James said. “I don’t know how you clean that up. I’m not saying that I’ve got all the answers, but guns are, they are a huge issue in America, and they’re not used for just hunting that a lot of people do for sport. Right now for Black people, right now when you’re hunting, we think you’re hunting us.”

James mentioned a video of 10-year-old Black child, Elijah Pierre-Louis, hiding behind a car in his driveway when a police car drove down his street, that went viral in June as an example of the pervasive fear that police presence causes in the Black community.

“The kid was in his (driveway) shooting baskets,” James described. “And as soon as the damn cop was about to ride by, the kid walked behind his dad’s truck and waited for the cop to go by. That s— is sad. No kid should have to feel that threatened that he has to hide at his own house. That is sad, but I know what he’s going through because I was one of those kids when I lived in the projects. When we saw a cop rolling, we went behind a brick wall and waited for it to roll out. And if we saw the cops lights come on we ran … even if we didn’t do nothing wrong.

“Because we were just scared. It’s tough.”

Trending – Solenn Heussaff opens up on the challenges of breastfeeding