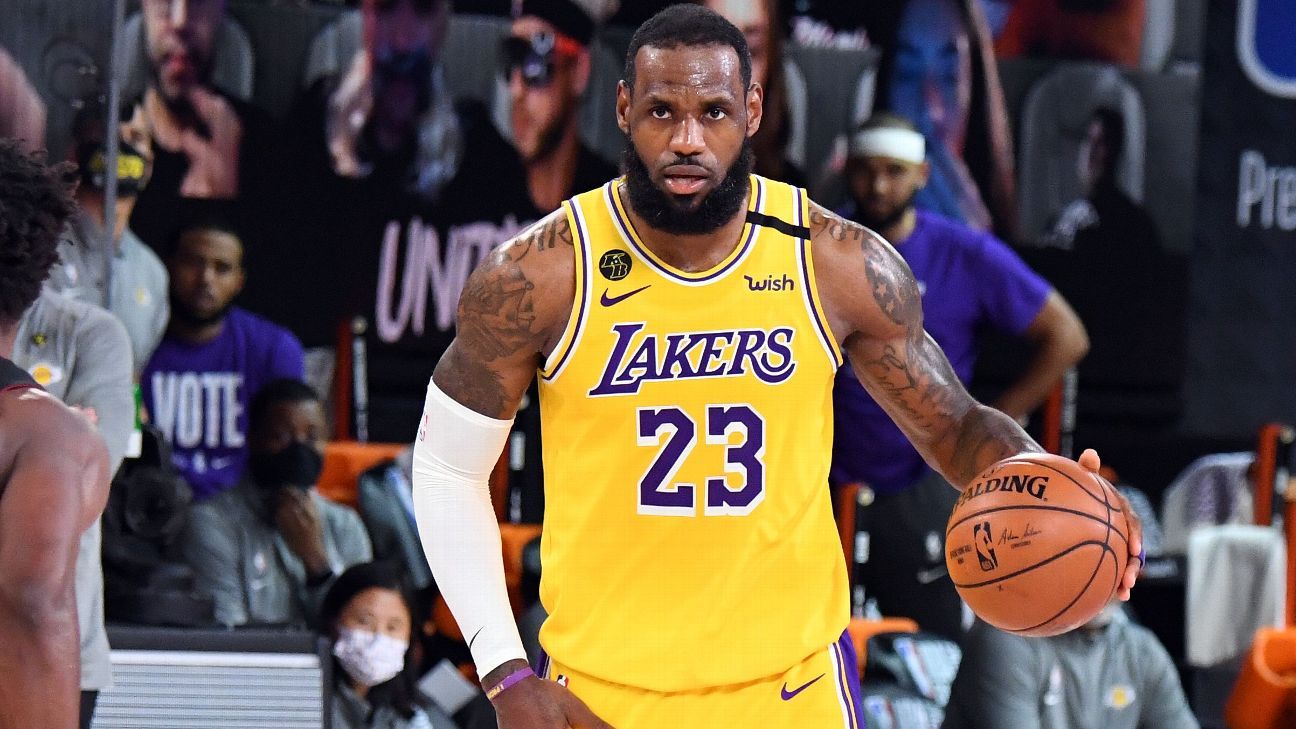 LAKE BUENA VISTA, Fla. — LeBron James woke up from his pregame nap on Tuesday and included two words in a text to the Los Angeles Lakers‘ group chat that said it all: Must win.

“We see the message from our leader,” Anthony Davis said after the Lakers’ 102-96 Game 4 victory over the Miami Heat put them up 3-1 in the NBA Finals. “And he just left it at that.”

The outcome leaves L.A. just one win away from the championship, which would be the organization’s 17th — tying the Boston Celtics for the most all time — and James’ fourth, spread out over three different franchises.

James led the Lakers with 28 points, 12 rebounds and 8 assists and overcame six turnovers — five of which were committed before halftime — to secure the game.

“I felt like for me, personally, this was one of the biggest games of my career,” said the 35-year-old James, the league’s all-time leader in playoff wins. “I just wanted to relay that message to my teammates, the type of zone I was in, the type of moment it was and the kind of team we were playing against. …

“They are just a gritty, so damn-well-coached team. I feel like if we’re going to be a championship ballclub, if we want to really be a championship team, that we got to have that same grit and that same attitude. It was my mindset. I’m still in it.”

As much as James exemplified that approach by playing the entire fourth quarter and tallying 11 points (on 7-for-7 shooting from the foul line), 5 rebounds and 2 assists in the final frame, it was Davis’ defensive work on Jimmy Butler that made it a winnable game down the stretch in the first place.

Coming off a 40-point triple-double in which he shot 14-for-20 in a Game 3 win, Butler stayed hot to start Game 4, scoring 11 points on 5-for-5 shooting in the first quarter. Butler scored only 11 points the rest of the game, going 3-of-12 in the final three quarters, including 1-for-7 when Davis was guarding him, according to research from ESPN Stats & Information.

“We just wanted to give him a different look, honestly,” said Davis, who finished with 22 points, 9 rebounds, 4 assists and 4 blocks and helped L.A. outscore Miami by 17 in the 42 minutes he was on the floor. “We were asking a lot out of Bron. I just told Bron, ‘I’ll take him.'”

James — who touted Davis for Defensive Player of the Year all season long the same way Davis endorsed James for MVP, only for the duo to both finish second for the respective awards — heaped praise on the big man.

“That guy can do everything defensively,” James said. “Guarding the ball, guard the post, slide his feet with guards, contest, can body up with bigs. I mean, need I say more?”

L.A. took a five-point lead into the fourth quarter, pushing it to as many as nine with a Davis 3 with 39.5 seconds left before winning by six. The Lakers extended their record to 56-0 this season when leading after three quarters — staying on top as the best team at protecting late leads in league history. Michael Jordan’s 1995-96 Chicago Bulls, who were 78-1 (.987) taking a lead into the fourth, are second.

“I think the fourth quarter, obviously it’s winning time,” James said. “You’ve got 12 minutes to buckle down defensively with the lead, kind of hold that lead, and then you have to execute offensively. Obviously, I didn’t know the stat coming into tonight. But for us, that’s just the mindset. … If we win the quarter, we win the game.”

And if the Lakers win Game 5 on Friday (9 p.m. ET, ABC), they win the title. It doesn’t sound as if there will be much napping for James between now and then.

“But I can rest then. I can sleep eight hours and get up and eat and then go right back to sleep if I want to.”

Hacked! – How Much Water Is There on Earth?