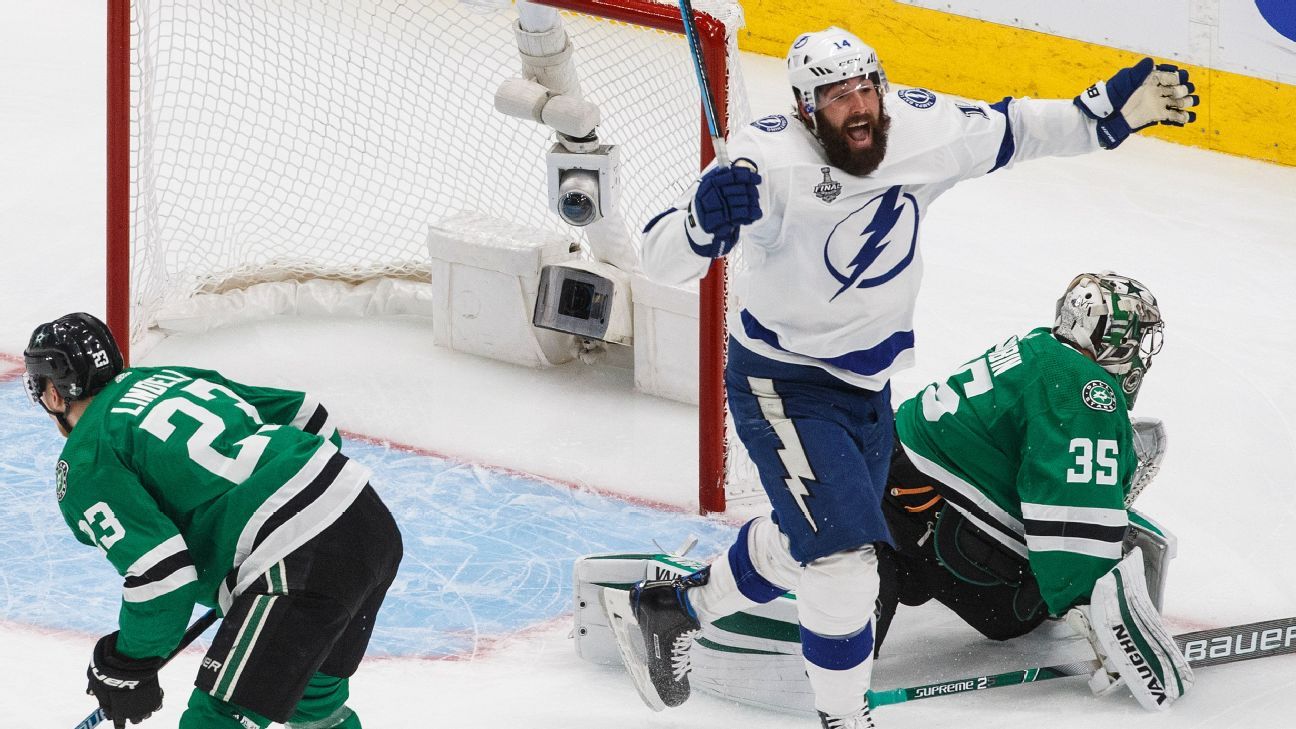 EDMONTON, Alberta — Blake Coleman and Brayden Point scored goals, the defense — as it did most of the postseason — flexed its depth and determination and the Tampa Bay Lightning captured their elusive second Stanley Cup on Monday night, defeating the Dallas Stars, 2-0, in Game 6.

The ultra-talented Lightning, one of the league’s top teams not to win the title the last five years, finally completed the complicated puzzle that is the Stanley Cup Playoffs, securing their first championship since 2004. They defeated the Columbus Blue Jackets, Boston Bruins, the league’s No. 1 team in the regular season, and the New York Islanders before eliminating the Stars in a manic marathon through two Canadian bubble sites that featured multiple overtimes and plenty of drama.

Tampa Bay — in all but one game in the bubbles — won the Cup without its captain and top player, Steven Stamkos, out while recovering from core muscle surgery. Stamkos played in Game 3 of the Cup Final, and scored a goal, but did not return for the Lightning.

On Monday, at least, Tampa Bay played like it didn’t need him. Point, developing into a superstar in his own right, scored a power-play goal in the first with assists from longtime standouts Nikita Kucherov and Victor Hedman, and Coleman, a pickup at the trade deadline from the New Jersey Devils, killed a penalty and scored on an odd-man rush in the second. And goaltender Andrei Vasilevskiy did his job in net, anchoring his team to the title.

“That last period was probably the longest period of my life,” Hedman, who won the Conn Smythe Trophy as the postseason’s MVP, said in the postgame interview on NBC. “There’s so many emotions at the same time.”

The Stars, who stayed alive with a dramatic overtime win in Game 5 Saturday night, continued to hurt themselves with penalties. Miro Heiksanen was in the box for Point’s goal. The Stars took two penalties in the first 12 minutes and three total in Game 6 after committing just one in Game 5. And the Lightning’s power play made them pay.

Veteran defenseman Andrej Sekera played for the Stars two nights after blocking a shot and missing a period and a half before returning. Banged-up Dallas had already lost forwards Roope Hintz, Radek Faksa and Blake Comeau, defenseman Stephen Johns and goaltender Ben Bishop during the postseason.

Stamkos was with the team in the arena, but did not dress for the finale.

“He did everything he could to get back and he did get back and unfortunately he couldn’t go any further,” Lightning coach Jon Cooper said.

The Lightning, who defeated the Calgary Flames in 2004 to win the title, lost in the Cup Final to the Chicago Blackhawks in 2015 in their last appearance in the final round.

Last season, as the league’s No. 1 overall seed, Tampa Bay lost to Columbus in the first round, setting the stage for this season of redemption.

“We’re a different group,” Hedman said. “And it takes a lot to do this, but we’re coming home with the Cup.”

Sports Today – Experts’ picks for Round 1 of the NBA playoffs