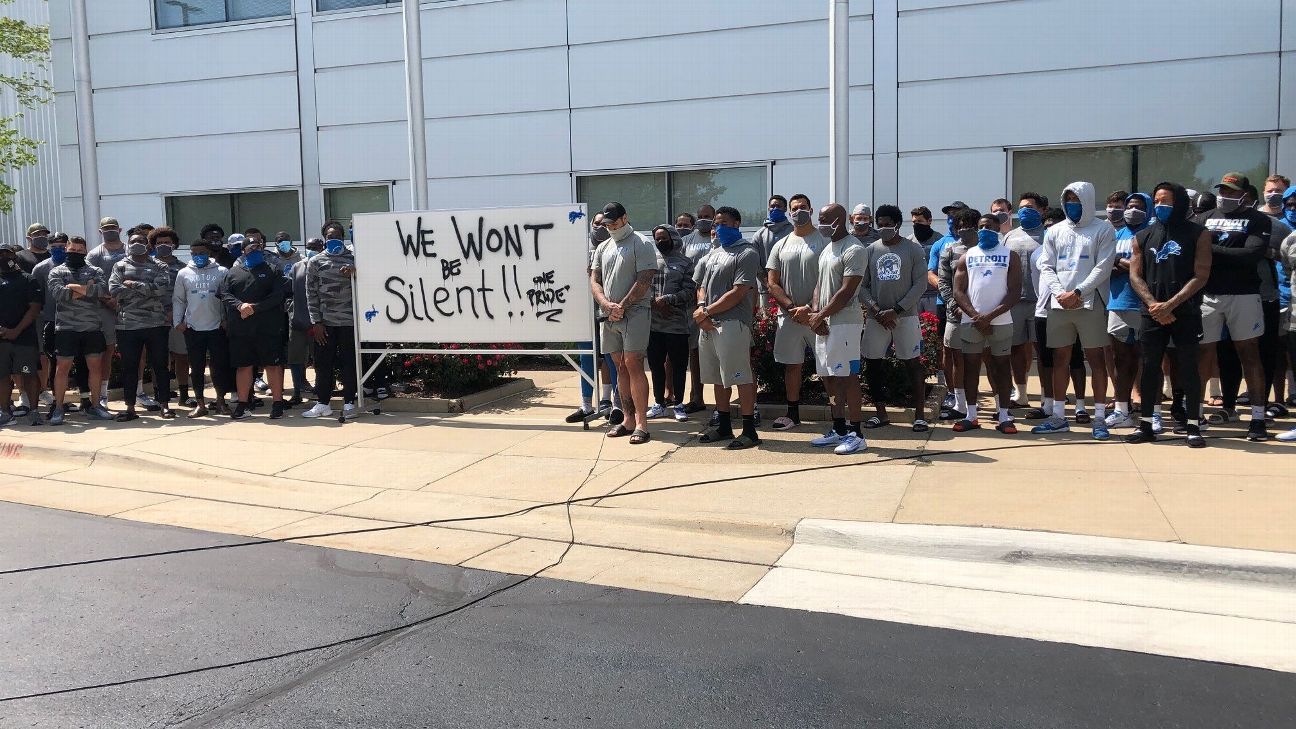 ALLEN PARK, Mich. — The Detroit Lions canceled practice Tuesday to protest the shooting of Jacob Blake by police in Kenosha, Wisconsin. They addressed reporters as a team in front of their building to deliver a message that they will be part of the change in the United States against police brutality.

Three Lions players — safety Duron Harmon, defensive end Trey Flowers and offensive tackle Taylor Decker — addressed the media to explain their decision and share why, when they entered the building Tuesday, they felt football wasn’t as important as speaking out and sending a message that what happened to Blake and many others in this country is not OK.

“As a team, we looked each other in the eyes and realized that football isn’t important today,” Harmon said. “We have a platform that we are able to use not just to raise awareness but to create change.”

Blake, a Black man, was shot by police on Sunday as he tried to enter the driver’s side door of his vehicle. Officers were responding to a domestic disturbance. Blake’s father, also named Jacob Blake, said Tuesday that his son was shot seven times. Blake’s attorney, Ben Crump, said he is paralyzed and it would “take a miracle” for him to walk again.

Harmon said the Lions will do everything they can to win football games — but they’ll do “everything we can to bring change as well.” The Lions brought out a whiteboard with two phrases written on it: “The World Can’t Go On” and “We Won’t Be Silent.”

“We can’t be silent,” Flowers said. “We can’t say silent. We cannot be going on in the world with our regular day. So today, unified we stand here and we came up with these words, these slogans, and we spread the message, spread the word.”

The Lions, Decker said, had “some really real conversations” Tuesday morning, during which he heard real pain and fear from teammates. Decker, who is white, relayed a story from one of his teammates, who said his mother calls to check on him daily to make sure he got home.

Decker then thought about how he drove home recently with a headlight out. He has an Arizona license and Michigan plate and “not for one second was I concerned about my safety.” So hearing his teammates’ stories resonated with him.

“I’m fortunate to be in a locker room with white, Black, brown, different socioeconomic backgrounds, guys from all over the country, and they are guys that I care about,” Decker said.

Throughout their 10-minute address, Flowers, Harmon and Decker stressed wanting to be the change and catalyst against police brutality and social injustice. Detroit has had personal experience with this as well, as safety Tracy Walker is the cousin of Ahmaud Arbery, who was shot and killed in Brunswick, Georgia, earlier this year.

The Lions’ decision to cancel practice came about organically. It started with a team meeting where Lions head coach Matt Patricia opened the floor for discussion. The conversation, quarterback Matthew Stafford said, lasted hours and focused solely on the experiences of players and at no time football was mentioned.

During a 45-minute break after the meeting, players met in the locker room trying to figure out what they wanted to do and how they wanted to handle what they were feeling. They had discussed similar topics virtually during the spring. This was the first time they had spoken about it in person, with everyone in the same room.

“Everybody was just gathered around and we’re just trying to figure out what we can do to not only bring light to the situation of what happened and how it’s wrong, just with police brutality,” Harmon said in a Zoom call with reporters after the demonstration. “But how can we, as a team, create change not only amongst ourselves but amongst the community so when things like this happen we’re speaking on it and putting the pressure on officials to do the right thing and prosecute these officers to the fullest extent.”

Patricia also said in a Zoom call he didn’t “feel right” practicing and focusing on football after the team meeting – and that he spent the meeting listening and following the lead of his players. And quickly he realized Tuesday with the Lions would not be about football but what was going on in the world.

He was just proud of his players for taking a stand.

“This team’s — the group of men that we have in that locker room, that’s a good group of men. I love those guys. We obviously understand the football-side of it, but it’s not about football today.”

The Lions are now choosing to try to change the world by using their platform as football players. “The Detroit Lions will be the change. We won’t be silent,” Harmon said. “We will not become numb to police brutality and social injustice.”

Sports Today – Oakley: Knicks’ behavior has ‘got to be stopped’

Hollywood Today – Locusts Swarm in Middle East in Disturbing Video, as if 2020...