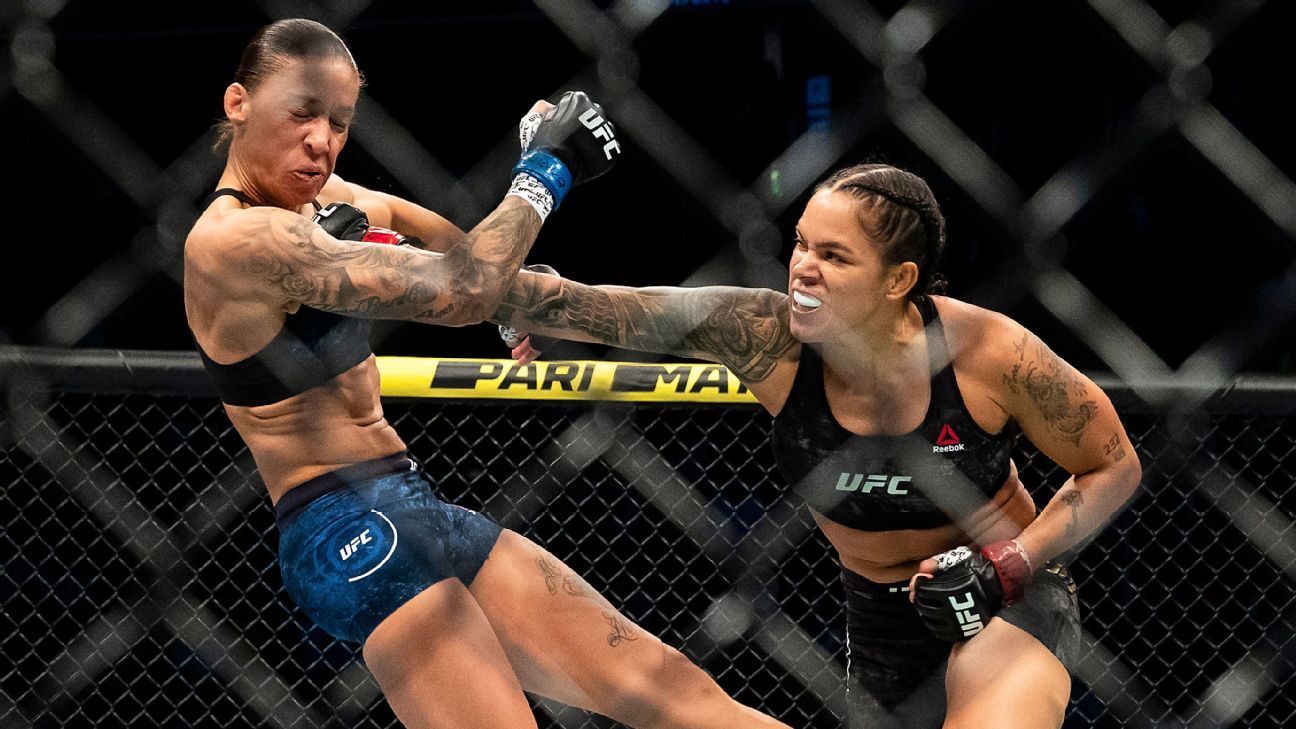 The UFC’s targeted card for May 9 lost some of its luster when women’s featherweight champion Amanda Nunes pulled out of her title fight against Felicia Spencer, citing her inability to have a full training camp.

The Nunes-Spencer matchup was one of three scheduled title bouts on what was considered a stacked card. Tony Ferguson and Justin Gaethje are scheduled to fight for the interim lightweight belt, and Henry Cejudo is expected to defend his bantamweight title against Dominick Cruz.

How much has the loss of Nunes vs. Spencer diminished the targeted card? Which fight is must-see, outside of the main event? ESPN MMA experts Ariel Helwani, Brett Okamoto, Jeff Wagenheim and Marc Raimondi attempt to answer those questions and more.

How does losing this fight hurt the appeal of the event targeted for May 9?

Helwani: It’s a blow, in my opinion, in the sense that there is only one official title fight on the card now. Also, I think Spencer has a solid chance of giving Nunes a run for her money. She told me they are hoping to rebook it in June, so hopefully that is the case.

Okamoto: It certainly stings — Amanda Nunes is widely considered the greatest female fighter of all time, so to remove her from an event, it’s an obvious bummer. But if you were into this card before, I don’t think you’re canceling any plans to watch it because of this piece of news. This event, if it goes off, should be one of the strongest cards in UFC history, which shouldn’t come as a surprise. After postponing multiple events over the past month, the UFC has a wealth of good matchups to pick and choose from, and the majority of the athletes are willing to compete on May 9. It wouldn’t surprise me if this card changes again (and perhaps, again) by the time it actually goes off, but I have a feeling it will be a deep card regardless of what happens.

Raimondi: Honestly, it doesn’t hurt much at all. If the card happens, it’ll be the first UFC event in nearly two months. Fans are chomping at the bit for fights, and the third bout down from the top — albeit a title contest — isn’t going to deter fans. The plan is still Tony Ferguson vs. Justin Gaethje for the interim UFC lightweight title in the main event. As long as that is preserved, the rest is mostly gravy. Give people that Henry Cejudo vs. Dominick Cruz bantamweight matchup plus Francis Ngannou vs. Jairzinho Rozenstruik and you’re already over the top.

Wagenheim: I don’t think the loss of this fight makes a huge impact. I love watching Nunes, and I know I’m not alone in that. And if her fight were the main event, this would be a problem. But the May 9 card is still stacked even without the featherweight title fight. And even if it weren’t so full of appealing fights, I honestly believe that fight fans are so starved for live sports that they would flock to whatever card Dana White could cobble together.

Who is your sleeper at 145 pounds?

Helwani: Felicia Spencer. That might seem weird considering she is a title contender, but there just aren’t that many featherweights right now. Megan Anderson is still a work in progress and obviously someone they have high hopes for.

Okamoto: I’m gonna be real with you. There isn’t one. There is barely a featherweight division to even speak of, let alone a sleeper candidate. Here’s your featherweight sleeper: any bantamweight who is coming off a loss and sees a shorter path to a UFC title at 145 pounds. That’s your sleeper.

Raimondi: There are only about seven fighters in the UFC’s 145-pound women’s division, so it’s hard to pick a sleeper. After Spencer and perhaps Megan Anderson get title shots, I don’t know what the future of the division is, if there is any. Unless there’s a huge influx of good women’s featherweight fighters coming in from other promotions, things don’t look all that bright.

Wagenheim: Wait, did the UFC sign some 145-pounders while I was sleeping? I mean, the promotion’s website lists just 11 featherweight women, and that includes the champ, as well as two fighters (Cris Cyborg, Cat Zingano) no longer in the UFC. Who’s left? Spencer, Megan Anderson, Holly Holm, Tonya Evinger, an 0-2 fighter, plus an Invicta FC bantamweight champ. For a sleeper, we might need to look to the UFC’s more stocked 135-pound division. Macy Chiasson, for instance, is 6-1 and began her career as a featherweight. Might she catch on that it’s a lot less crowded up at 145, also known as the land of opportunity?

How would you break down Nunes-Spencer if it happens later this year?

Helwani: Spencer is supremely tough and solid on the ground. She has a better chance of beating Nunes — no small feat — than any featherweight on the roster. Despite losing to Cris Cyborg last year, she proved that she doesn’t get intimidated and is tough as nails. If she can get this fight to the ground, she has a shot, no doubt.

Okamoto: More intriguing than a lot of people think. Spencer is still relatively unknown despite a respectable showing against former champion Cris “Cyborg” Justino and a pair of wins in the UFC. She’s soft-spoken, and doesn’t have a scary highlight reel of knockout finishes. It will be very easy for some to chalk her up as a sacrifice to the female GOAT when they eventually meet. But Spencer is a real featherweight as far as size is concerned, and she’s a problem on the ground. I’m not saying she beats Nunes, but can I picture a world in which she’s able to take Nunes down, keep her down, and sap her gas tank? Yes, I can picture that world pretty easily. Nunes is the obvious favorite, but she cannot afford to take Spencer lightly. And it appears she knows that, given her decision to put the fight off until she’s fully prepared.

Raimondi: Spencer was tough and skilled enough on the feet to hang around with Cris Cyborg for three rounds at UFC 240 last July. That’s pretty impressive. But also consider that Nunes stopped Cyborg in the first round. Right now, Nunes is on another level, and Spencer winning would be a huge upset. If Spencer could take one positive out of Nunes’ fight against Germaine de Randamie from UFC 245 in December, it would be that a talented striker can force Nunes into errors. However, will Spencer be able to stop the inevitable takedown attempts if that happens? De Randamie could not.

Wagenheim: Spencer got more kudos for her lone defeat than her eight career wins. Bloodying up Cris Cyborg and hanging with her for three rounds last July did say a lot about the 29-year-old’s toughness. And her grappling game could pose a threat to Nunes if the champ gets caught in a bad position. But we’re grasping at straws here. Nunes is the best in the game right now, and she holds a clear-cut advantage over Spencer no matter where the fight goes. It would be a stunning upset to hear “And new …”

What’s the one fight on this card you need to see, other than the main event?

Helwani: Lots to choose from, but ultimately, I am really intrigued by whether Dominick Cruz can turn back the clock yet again after another long layoff to beat Henry Cejudo. They have a deep backstory and solid rivalry, but most importantly, if ring rust really isn’t a factor for Cruz, that could be fascinating theater.

Okamoto: As far as the targeted card, I really, really want to see the heavyweight matchup between Francis Ngannou and Jairzinho Rozenstruik. Once upon a time, before the coronavirus interrupted sports, that was a UFC Fight Night main event. And a great one. From what I’ve heard, that fight is not official just yet though, so we’ll see if it happens on May 9. Jeremy Stephens versus Calvin Kattar is an outstanding fight, and anyone who has listened to me much over the past six months probably knows I am obsessed with the UFC’s featherweight division right now. I think it’s the most intriguing division in the sport. The sleeper for fight of the night, though, is Vicente Luque versus Niko Price.

Raimondi: I’m very intrigued by the co-main event, Henry Cejudo defending his bantamweight title against Dominick Cruz. Cejudo has been out since last June. Before injuring his shoulder while beating Marlon Moraes to win the 135-pound title, he was on an incredible roll. I think people are forgetting just how good Cejudo is and how excellent his fights usually are, because of some of his admittedly cringe-worthy trash talk. Then you add in Cruz, who is one of the greatest bantamweight fighters of all time, if not the best ever. Cruz has been out for more than three years, and that is a huge concern, especially going up against someone as talented — and explosive — as Cejudo. If Cruz finds a way to pull it off, it would be the greatest comeback victory in MMA history. Cruz is a master tactician and a genius in the Octagon. So he surely won’t get blown up. This one should be very good.

Wagenheim: As much as I have criticized Henry Cejudo vs. Dominick Cruz as a wrongheaded booking for a championship fight, I am curious to see what Cruz can do after 1,226 days away from the cage. He has impressed us before with his uncommon ability to return from extended absences looking like he has not lost a step. Then again, in his last fight — a loss to Cody Garbrandt way back in 2016 — Cruz seemed a step behind. How will history’s greatest bantamweight look against a new champ who’s hungry to add another legend’s name to his résumé? I’m annoyed that this is the matchup the UFC deemed worthy of Cejudo’s first title defense, but now that it’s happening, go ahead and call me a hypocrite: I’ll be watching.

Sports Today – Butler drained after win: ‘Left it all out on floor’