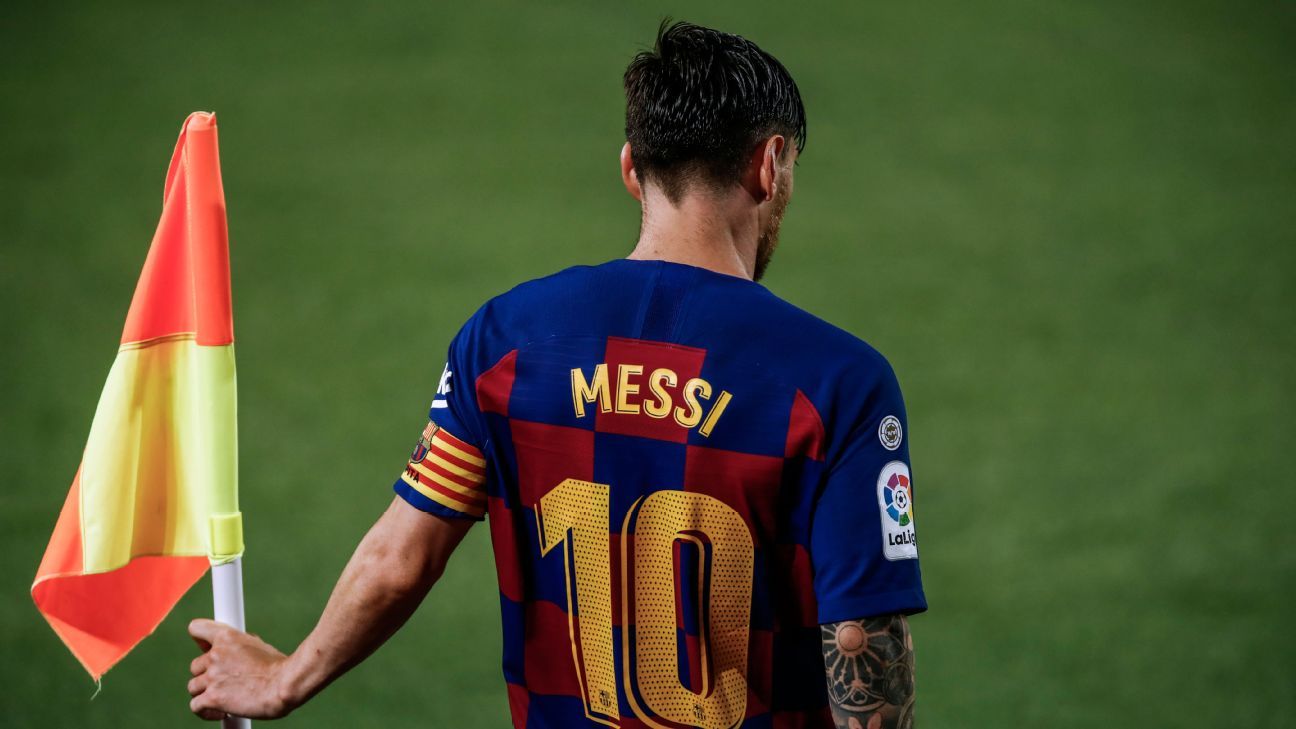 The problem with analyzing the future of Lionel Messi is that, after 20 years, his relationship with Barcelona lies somewhere between the professional and the romantic. You can use reason and logic on the first part to come up with plausible scenarios. You can’t account for the second, partly because it’s intensely personal (and this is perhaps the most private superstar in recent sports history) and partly because it’s irrational and mutable, in the way emotional relationships so often are.

So let’s do the comparatively easier rational part first, shall we?

Messi signed a contract that expires on June 30, 2021. The final season of that contract, in 2020-21, was meant to be an “option year” — he could choose to break off his deal and become a free agent simply by informing the club by June 10, 2020. That’s when everybody assumed the 2019-20 campaign would be over … except, of course, we had the COVID-19 pandemic and 2019-20 stretched all the way into August. Thus, Messi’s camp argues, so should his right to exercise his option to leave as a free agent.

(Note here that — and this is the downside to not having transparency — Spanish radio station Onda Cero claims that any such deadline is nonsense anyway and that, having seen Messi’s contract, it simply states “at the end of the 2019-20 season.” As ever, in the cacophony of leaks and rumours surrounding the club, it’s hard to know what’s accurate.)

– Sources: Messi may have to miss season to leave Barca
– Lowe: Bad blood and ‘burofax’ between Messi, Barca
– Hunter: Why Barcelona should let Messi go
– Connelly: How would Barca look without Messi?

In any case, as you’d expect, Barcelona feel differently, which is why — unless some agreement is reached — this is heading to the courts in Spain.

Once it became clear that the season would spill over past June 30 (the date when most player contracts expire), FIFA issued a legal opinion saying that it would be sensible to extend contracts through to the end of the season since that was the original intent and nobody could have predicted the pandemic. The problem is this is just a legal opinion and is subordinate to national employment law, as FIFA themselves recognized. So, basically, they have no jurisdiction.

La Liga, via their ebullient president, Javier Tebas, issued their own view and sided with Barcelona, which is precisely what you’d expect. They’re running a business and, having lost Neymar and Cristiano Ronaldo in recent seasons, this is the last thing they need. Of course, they have no jurisdiction either, other than the ability to refuse to issue a domestic transfer license, which is moot because if he leaves, he’s going abroad.

If it does come down to lawyers, it will be settled in the Big Boys’ court and, in a brilliant move that shows they mean business, Messi’s team hired a law firm that previously looked after a fair chunk of Barcelona’s affairs. Logic suggests, though, that a protracted legal battle hurts both sides.

Messi is 33 and isn’t getting any younger. Every day he doesn’t play and train is a day he’s not getting back. And every day that passes makes him less valuable, whether to Barcelona or to a prospective new club.

In Barca’s case, it’s even worse. Taking your star player to court for breach of contract (which is what, in their view, he’s doing by not showing up for training) in an effort to get him to stick around for another season before you lose him as a free agent anyway next June is not a good look. And it only gets worse when you consider there will be presidential elections coming up in March. Barcelona president Josep Maria Bartomeu has reached his term limits (and in any case has offered to step aside if it helps keep Messi at the Camp Nou), but whoever replaces him risks inheriting an even worse dumpster fire.

So to avoid mutual self-harm, the rational thing to do is reach a resolution without waiting for the courts to rule one way or another. But here, you get to what Messi really wants. People far more knowledgeable than me insist his mind is made up and he wants to leave. If that’s the case, it’s simply a question of money, as in how much can Barcelona demand in compensation and how much would Messi demand from his new club.

His current deal, once you factor in image rights and ancillary income, nets him well in excess of €100 million a year. For context, that’s roughly one-fourth of the total wage bill at Manchester City (to mention one of the clubs with which he has been linked).

Can you make a business case that he’ll generate more than that, even factoring in “fuzzy” metrics such as brand value? Maybe, but if you then have to pay a transfer fee on top of it, it becomes difficult. And that, incidentally, is why some scenarios had Messi moving partly in exchange for players, such as Angelino, Bernardo Silva, Riyad Mahrez and/or Eric Garcia. It’s still a post-COVID-19 economy, and, despite temporary relaxation, financial fair play is still around.

This would be a whole heck of a lot easier if Messi took a pay cut or made his deal more bonus-heavy. And, I guess, it’s an option even though it would send what feels like an unconscionable message: he was so desperate to leave the Camp Nou that he took less money to play elsewhere.

The upshot? Messi, who has only ever worn two jerseys — Barcelona and Argentina — would get a fresh start at a new club in a new country, an experience he might otherwise be denied. Barca would suddenly have financial breathing space and, perhaps, a batch of young players. With new elections, they could hit the reset button and start over. Lest we forget, this club was around a long time before Messi arrived and will continue to exist long after he’s gone.

Then there’s the other rational (some might say cynical) reading: this is a gigantic power play. Messi is disgusted and annoyed by the shambolic way the club have been run and feels disrespected and taken for granted (his rare public statements make this pretty clear), and what he really wants is change. And not just any change, but change that he can control.

Let’s face it, he can decide the next Barcelona president — in fact, every detail, from the club strip to the desserts served in the hospitality suites — by simply endorsing him at the elections and saying “if X doesn’t win, I’m leaving on June 30, 2021.” This is where he’s been since he was 13. This is the club he loves, this is the city where he has raised a family and grown into a man. He can be post-playing-career Johan Cruyff to this club … if that’s what he wants.

That was my first reading, but now, I’m not certain. Partly because of the copious reporting out of the Camp Nou that this is not a power play. And partly because if this is what he wants, he doesn’t need to go through this charade. He can simply inform Bartomeu of his plans and say “either do what I want now, or I’ll throw my support behind a rival candidate who will give me everything I want in March … and humiliate you in the process.”

So much for reason. What about emotion?

Because Messi is so private and so quiet, we can only speculate. Yet there are parallels with what happened in 2016, after the Copa America Centenario. Angry and frustrated with the Argentine FA, he announced his retirement from international football. That retirement lasted 47 days, and he eventually reconsidered. Obviously, this was different. There was a World Cup to play in 2018 and, unlike with club football, he couldn’t just go sign for another country.

But you get the sense that maybe this decision isn’t dissimilar to that one and is born out of emotion, not calculation. There’s another hint in that direction, too.

If the deadline had been June 10, he could have exercised the option then and Barca would have been powerless to stop him. He could then have signed a brief contract extension to play the rest of the Liga season and the Champions League and would be in an unassailable position, without a sticky legal mess and free to move wherever he wants with Barca getting nothing in return. Not just that, his new club wouldn’t have had to pay a transfer fee, which means more money for Messi or more resources to put great players around him. After all, despite seeing the Liga title slip away and despite the humiliation against Bayern, it’s not as if, rationally, something happened between June 1 and today that substantially changed Barcelona’s situation. It was a mess before, and it’s a mess now.

If this is a decision rooted in gut and emotion rather than reason, there’s no telling what will happen next. It’s a love story, and anybody who has been in love will tell you that it’s usually not rational and can sometimes be painful, wearying and self-destructive. The highs, hopefully, outweigh the lows, but the lows can be brutal.

Sports Today – No. 1 pick Ionescu struggles in debut for Liberty

Sports Today – Are NHL players on board with return-to-play plans?

Sports Today – Everton are top of the Premier League and primed to end...