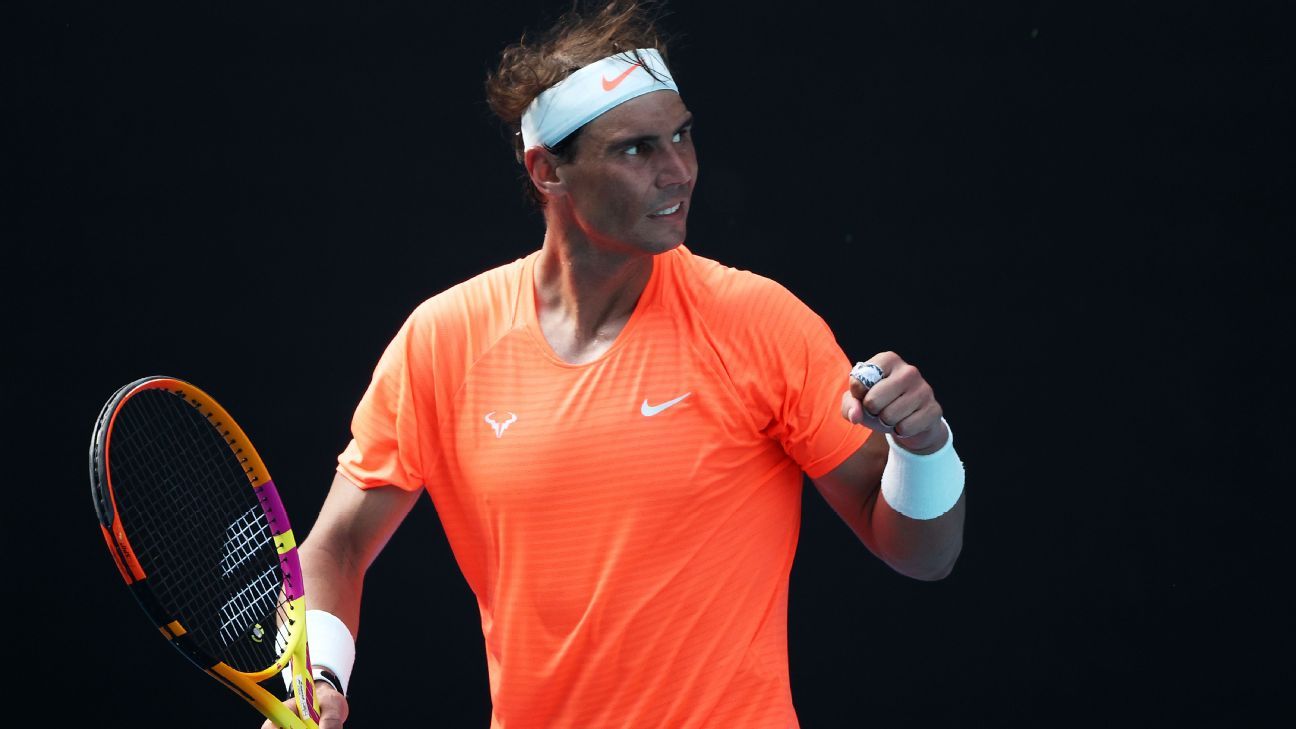 MELBOURNE, Australia — Rafael Nadal advanced to the Australian Open quarterfinals for the 13th time, closing his 6-3, 6-4, 6-2 win over 16th-seeded Fabio Fognini on Monday with an ace.

The No. 2-ranked Nadal was wary of Fognini and lifted his game in the second and third sets to avoid any repeat of the 2015 US Open. That’s when Fognini became one of only two players who have rallied from two sets down to beat Nadal in five.

There was no chance this time. Nadal responded to dropping a service game in the second set by breaking straight back.

He will now play fifth-seeded Stefanos Tsitsipas, who moves into the quarterfinals at Melbourne Park for the second time in three years after ninth-seeded Matteo Berrettini withdrew before their fourth-round match because of an abdominal injury.

Tsitsipas lost to Nadal in the Australian Open semifinals in 2019.

Berrettini said he was told he could hurt himself worse if he tried playing Monday. He said he was injured in the third set of his fourth-round victory over Karen Khachanov on Saturday.

Berrettini’s best Grand Slam showing was reaching the semifinals of the 2019 US Open.

It will be Nadal’s 43rd Grand Slam quarterfinal. He shares the record for most men’s major titles with Roger Federer. They each have 20.

Nadal’s preparation for the year’s first major was hampered by back stiffness.

“I’m happy the back is holding better,” he said after the win over Fognini.

The No. 4-seeded Medvedev needed just 1½ hours to stretch his winning streak to 18 matches with the 6-4, 6-2, 6-3 victory at Margaret Court Arena on Monday.

Medvedev was the 2019 US Open runner-up and reached the semifinals there last year.

He had lost in the fourth round at Melbourne Park each of the past two years. But he compiled 29 winners to just 15 unforced errors against McDonald, who won NCAA singles and doubles titles for UCLA in 2016 and is working his way back from a torn hamstring tendon less than two years ago.

Next up for Medvedev will be a match against his Russian countryman Andrey Rublev, who advanced to the quarterfinals via walkover when his fourth-round opponent, Norway’s Casper Ruud, retired after losing the first two sets on Monday.

The No. 24-seeded Ruud had treatment for an apparent stomach muscle injury during the match on Margaret Court Arena and quit after falling behind 6-2, 7-6 (3).

The match lasted 1 hour and 17 minutes.

Hacked! – The Deep-ocean Anglerfish Catches Prey With the Lure on Its Head