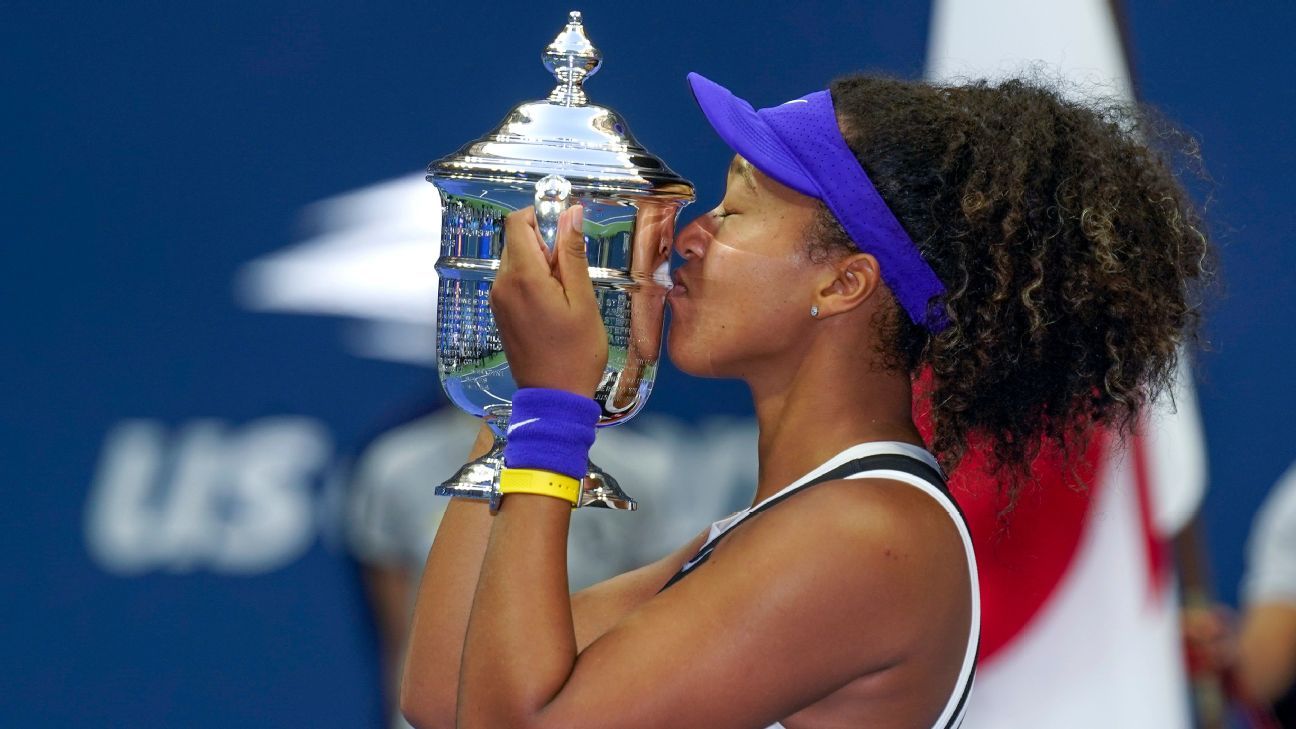 Naomi Osaka laid down in the middle of the court with her hands folded and stared at the sky. She had just won the US Open title — her second in three years and third overall major championship — against Victoria Azarenka. The smile had now faded from her face, and she was ready to fully take in the moment.

“I was thinking about all the times I’ve watched the great players sort of collapse onto the ground and look up into the sky,” she said. “I’ve always wanted to see what they saw.”

There were few people in the stands of Arthur Ashe Stadium on Saturday to watch the scene unfold or to shower her in applause after restrictions were put in place in New York due to coronavirus pandemic. It didn’t much matter. Millions around the world witnessed what she did. And when she finally stood up, she solidified her status as the sport’s new leader on and off the court.

“I think I just got through it because during quarantine I wanted to set myself up to possibly win this tournament,” she said. “I felt like I just worked so hard, I wanted to give myself an opportunity.”

After Osaka’s 1-6, 6-3, 6-3 comeback victory against Azarenka, she is expected to rise to No. 3 in the rankings and is tied for third among active players for most major titles. Perhaps more importantly, Osaka completed what she had set out to do. She set aside seven masks before the tournament, each bearing the name of a person killed as the result of racial injustice or police brutality. She was able to wear each one. It was her mission to give a voice to the voiceless, and it helped motivate her until the final moments.

Azarenka took the first set in a dizzying 26 minutes. Just moments later, Osaka found herself a point away from falling into a 3-0 hole in the second set. When the analysts, the Twitter experts, maybe even her opponent, had all but counted her out, she remained calm.

“I just start thinking point by point,” she said. “I wasn’t really thinking about winning after a certain while. I just thought about, ‘I came here with a goal, I’m playing in the final, a lot of people want to be in this final, so I can’t lose 6-1, 6-0.'”

Her strategy worked. After an hour and 53 minutes, she was crowned the champion and became the first woman since Arantxa Sánchez-Vicario in 1994 to win the US Open after dropping the first set.

When some questioned whether or not Osaka would be able to be an activist and a tennis player, she answered those critics on Saturday with a resounding yes.

“She has shown more and more confidence about speaking up,” said Billie Jean King, the tennis legend and longtime social justice advocate, during one of Osaka’s previous matches. “She’s very quiet and calm, but internally she’s on fire and thinking about things.

“I really admire what she’s done. Sports is a platform, and women’s tennis, we are the leaders in women’s sports, and Naomi has really stepped up.”

With such growth and maturity, as an athlete and as a person, it is hard to believe it has been less than three years since Osaka won her first WTA title at Indian Wells and gave what she called “the worst acceptance speech of all time,” and just two years since she won her first Slam title on this same court in New York.

Throughout her run at the US Open, Naomi Osaka wore a mask highlighting a different Black victim of racial injustice and police brutality.

In 2018, Osaka won a controversial final against Serena Williams, thrusting the then-20-year-old into the global spotlight. She followed it up with another trophy at the 2019 Australian Open and became the world No. 1.

Osaka was suddenly everywhere — in magazines, on television shows, seated courtside at NBA games. The daughter of a Japanese mother and a Haitian father and representing Japan but having grown up in the United States, the biracial Osaka was heralded as the face of an increasingly multicultural world and a sponsor’s dream. Forbes named her the highest-paid female athlete in the world for 2020. But she talked about struggling with the sudden attention.

Winning back-to-back Slams results in sky-high expectations. Osaka admitted how challenging that was and how she stopped enjoying the game. When the sport was shut down in March due to the coronavirus pandemic, Osaka took the time to reevaluate her attitude and her goals. She went to Minneapolis to protest the death of George Floyd with her boyfriend, rapper Cordae. She wrote an op-ed about systemic racism for Esquire and urged others to get involved via social media posts.

When the season resumed, she was reenergized and refreshed. Osaka won her first three matches at the Western & Southern Open, the first of the two events in the New York bubble. Following her quarterfinal victory, she announced she would be sitting out her semifinal match the following day in hopes of starting a conversation in the tennis world regarding the police shooting of Jacob Blake.

As a result of her actions, the tournament paused play for the entire day to recognize what was happening around the country. Wearing a Black Lives Matter shirt ahead of the match, Osaka played in the semifinals and won. She withdrew in the final, also against Azarenka, due to a left hamstring injury. Azarenka became the champion by default, but Osaka still accomplished what she had wanted to do by making a statement to address racial inequality.

After winning the US Open women’s final, Naomi Osaka is asked what message she wanted to share by wearing masks bearing names of Black victims of racial injustice and police brutality.

“I would definitely say it’s been an important few months,” she said. “For me, my life was always go, go tennis-wise, especially after the previous US Open that I won. It definitely accelerated things, and I’ve never had a chance to slow down.

“The quarantine definitely gave me a chance to think a lot about things, what I want to accomplish, what I want people to remember me by. For me, I came into this tournament, or these two tournaments, with that mindset. I think it definitely helped me out.”

At just 22, Osaka knows the importance of her platform. She credited Williams earlier in the tournament for paving the way for her and pointed to another legendary athlete on Saturday for inspiring her.

Wearing a Kobe Bryant Lakers jersey to her news conference hours after her win, Osaka said it was the late NBA star who always believed how good she could become, as an athlete and beyond. She tweeted that she wore the jersey every day after her matches to give her strength. Bryant, known for his fierce competitiveness and tireless work ethic, was a mentor for Osaka before his death in January, and even attended one of her matches at the 2019 US Open. Osaka sounded determined to fulfill his vision.

“I feel like at this point there are certain things that I do that I hope can make him proud,” she said. “It’s like keeping his legacy alive for me. I think it’s amazing how one person can inspire so many people. Everyone has a really great story about him just being kind, spreading warmth.