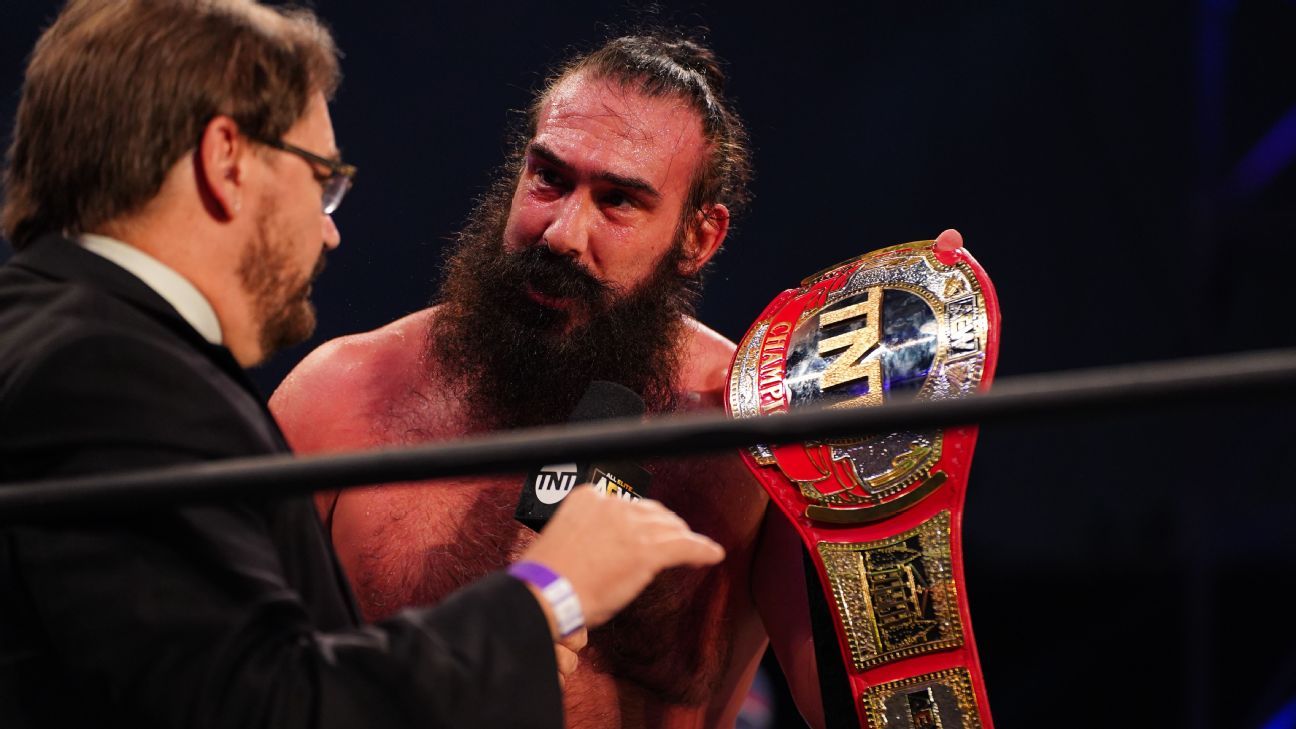 It’s the autumn of 2019. Brodie Lee sits in his Tampa home with his wife and two sons, and he waits.

In reality, Lee — real name Jonathan Huber — has spent most of his 19-year career waiting. Waiting for his opportunity in the big time. Waiting for his breakout singles run. Waiting for the chance to tap into his creativity and be the best version of himself. And at the end of his WWE tenure, waiting to be able to do anything.

“I was at home, [but it felt like] prison,” Lee told ESPN. “I couldn’t do what I wanted to do, and that was just wrestle.”

It takes just one look at Lee to see the potential in him. At 6-foot-5, 275 pounds, Lee has the size and frame of a prototypical wrestling star. His long hair, menacing eyes and wild beard, reminiscent of the legendary Bruiser Brody, give him a unique look that would stand out in any room. If anything, he could have made a wrestling career just based on his appearance. But Lee is far more than just an imposing figure when he steps in the ring.

AEW All Out takes place on Saturday, Sept. 5 at Daily’s Place in Jacksonville, FL

In the late 2000s and early 2010s, Lee worked in top independent promotions around the world, breaking the stereotypes of lumbering big men and pioneering a new wave of athletic giants. He became a must-see attraction on the indies, blending power moves with deceptive agility. Lee stood out as a commodity, but a chance at the big time still eluded him. It wasn’t until Lee was 11 years into his career and ready to call it quits that WWE finally offered him a contract at the age of 32 in 2012.

There, Brodie Lee transformed into Luke Harper, a self-described “backwoods hillbilly” who joined The Wyatt Family, an on-screen cult led by current WWE main eventer Bray Wyatt. The group became one of WWE’s hottest acts upon their main-roster arrival in 2013, but Lee’s success in the company came inconsistently. After a year-and-a-half with the Wyatts, he broke free for his first singles run, and had a brief reign as Intercontinental champion. But he rarely got the opportunity to connect with fans on the microphone and ultimately rejoined the Wyatt Family in mid-2015 as a supporting player once again.

In 2017, Lee got what seemed to be his chance to break out when Randy Orton joined the Wyatt Family. In an angle with two current main-eventers in Orton and Wyatt, Lee began to garner the loudest reactions of the group. He went solo and turned away from his role as a villain for the first (and only) time in his WWE career. This led to the highest-profile opportunity of Lee’s career at that point, a singles match against Orton at the Elimination Chamber pay-per-view, where Lee lost decisively, halting any semblance of a main-event push and closing the window on a ready-made opportunity at singles stardom. In a matter of weeks, Lee went from a believable player at the same level as two multi-time world champions who wouldn’t have been out of place in a WrestleMania world championship match to an afterthought.

Lee would eventually return to the tag team division with former Wyatt Family running mate Erick Rowan, even winning the Smackdown tag team championships at WrestleMania, but the damage was done. Lee requested his release from WWE in March 2019, but the company instead extended his contract six months due to time missed from surgery.

“I wish you could have talked to my wife, because she loves to tell people just, not that I was a horrible person, but there was a cloud almost over me weekly,” said Lee. “Just affecting me, and me not knowing that.”

On Dec. 8, WWE granted Lee his release. Luke Harper was a thing of the past. Lee’s waiting had turned into preparation.

“Luke Harper had a wonderful career in WWE, if you really look at it and break it down, he had a really good career,” Lee said. “But I don’t want people to think, ‘Oh, that used to be Luke Harper’ when they see Brodie Lee. I want them to be like, ‘Holy f—, that’s Brodie Lee, and he’s the man.'”

Upstart All Elite Wrestling, a promotion with a national television deal of its own, a roster full of talented performers, and a heavy emphasis on the in-ring product seemed like a natural fit for Lee. Unbeknownst to Lee, the perfect opportunity for him had already been set into motion: an opening in another cult, except this time, Lee would be the leader, surrounded by friends he made before he’d ever set foot in WWE.

Evil Uno (real name Nicolas Dansereau) and Stu Grayson (real name Marc Dionne) spent 2019 establishing a heel group called The Dark Order, a “Scientology-like cult” as Grayson put it. The group was formed to feud with AEW’s top babyfaces, but due to a cold debut and a disastrous main-event angle to close 2019 that saw one of The Dark Order’s “minions” go viral for throwing blatantly fake punches, Uno and Grayson found themselves in need of a Hail Mary to keep their jobs.

“We figured we were either screwed, or we’re going to have to find something to bring us back from the dead,” Grayson said.

It just so happened that AEW president Tony Khan had Lee on his radar, and that “something” turned into a “someone.”

“He’s got the great physical size. He didn’t do so many promos in WWE, but he’s actually a great promo,” said Khan. “And so he was from the beginning someone that we figured to be a top person in AEW as soon as he signed with us.”

Khan knew he had something in Uno and Grayson, and insisted on re-investing in the group, bolstering their credibility among casual fans by inserting Lee.

“It wasn’t necessarily those guys’ fault, but I felt like we had to do a lot of things to add to the presentation. And that was a lot of brainstorming towards the end of the year and the beginning of this year,” said Khan.

Lee signed with AEW and was set to debut as “The Exalted One,” culminating a months-long angle revolving around a mysterious, unnamed leader of The Dark Order. Before Lee even arrived, the mystery surrounding The Exalted One breathed fresh air into the act, and Uno and Grayson knew they’d have the perfect payoff.

“We wanted to have someone we know we could work with, someone we could actually fit as the head of a cult, someone who could talk, someone who could wrestle,” said Grayson. “So when we had confirmation that Brodie Lee was coming in, we were pretty happy, because we thought of all the people we could have had, we were going to have one of our best friends. He can work, he looks great, he talks.”

The timing couldn’t have worked out better for Lee. His 90-day no-compete clause was set to expire right before the March 18 episode of “AEW Dynamite,” which was set to take place in Lee’s hometown of Rochester.

“It was serendipitous,” said Lee. “It was literally too perfect to have this big reveal, big debut and reawakening, being born again.”

It was, in fact, too perfect. The coronavirus pandemic hit, and the March 18 edition of “AEW Dynamite” would no longer take place in Rochester, but instead at an empty Daily’s Place in Jacksonville, Florida. Given the uncertain nature of the virus, especially at the onset, it appeared that Lee would once again be forced to wait.

“Early on, we didn’t know the severity of what was going on, we thought the best thing to do would be to push it back. Wait until there’s a crowd, because this is supposed to be a very large moment,” said Uno. “I think one thing that AEW did very different at the time was they didn’t wait to debut their big things. They didn’t act as if no crowd meant a lesser show. They went ahead and gave you the things you’d been wanting for.”

The show went on, and Lee arrived in Jacksonville with a daunting mission: reboot his career, and potentially save his friends.

“It was like, now it’s my almost duty to come in and to bring up the game of everybody involved,” Lee said.

Lee made his debut via a pre-taped promo, followed immediately by a surprise attack in the ring. He looked comfortable and free on the camera, but behind the scenes, eight years of doubt, externally and internally, turned into anxiety.

“I had to understand that my instincts were correct again,” said Lee. “I was almost seeking out so many opinions because that’s where I came from, that’s what it was. It was lots of people putting pieces in, instead of just letting myself be who I am.”

Lee’s debut shot him straight into the main-event scene, and his first feud in the company positioned Lee as the challenger for his old friend Jon Moxley’s AEW championship at May’s “Double or Nothing” pay-per-view. Lee lost the match, but reaffirmed management’s belief in him as a star, positioning him for opportunities down the line.

“I think his most impressive performance as a main-event pro wrestler at that point was the match with Moxley,” said Khan. “And I think that opened a lot of our eyes, we believed he could be the guy and he showed it’s true, he could be the guy.”

Lee spent the next two months working tag matches alongside The Dark Order and developing his character both on AEW’s weekly “Dynamite” shows and Being The Elite, The Young Bucks’ weekly YouTube vlog/sketch show. Lee, Uno and Grayson used those skits to refine their characters, crack jokes within the context of being a cult, and showed fans how much fun they were having.

Most importantly, even though some of the content bordered on the absurd, appearing on BTE helped everyone in the Dark Order to restore their self-belief.

“That confidence has only come in the last couple of months, and the last three or four weeks that I’ve talked, everything I’ve said has been 100% true, has been 100% from my heart, and to be able to talk about that is cathartic and almost therapeutic, so you guys are seeing that come out on screen,” said Lee. “That anxiety, that confidence, and all of that coming out together, I hope you guys are enjoying it.”

After 19 years of hearing about his potential, Lee finally made good. He challenged Cody Rhodes, who had been defending his TNT championship on a regular basis against all comers since he first won the title. In just over three minutes, Lee destroyed Cody on Aug. 22, winning the TNT title and leading a Dark Order attack on Cody’s friends and family in one of the most shocking angles of the company’s young history. Lee, Uno, and Grayson stood tall — nine months removed from irrelevancy, and now one of the hottest acts in the company.

After elevating each other in their time of greatest need, Lee and the Dark Order were the perfect fit. And after all of the work it took to get there, they succeeded together.

“It was like a moment that had been worked on for so f—ing long for me,” said Lee. “And I’m getting emotional right now, so I’m sorry. It’s just been so much s— over the last three years.”

Despite all of the waiting, the near-misses and years of wondering whether the opportunity to be a true star in wrestling would ever work out, Lee lived his dream and got his true breakout moment.

“And it feels so f—ing good to prove everybody wrong.”

Sports Today – Inside the political donation history of wealthy sports...