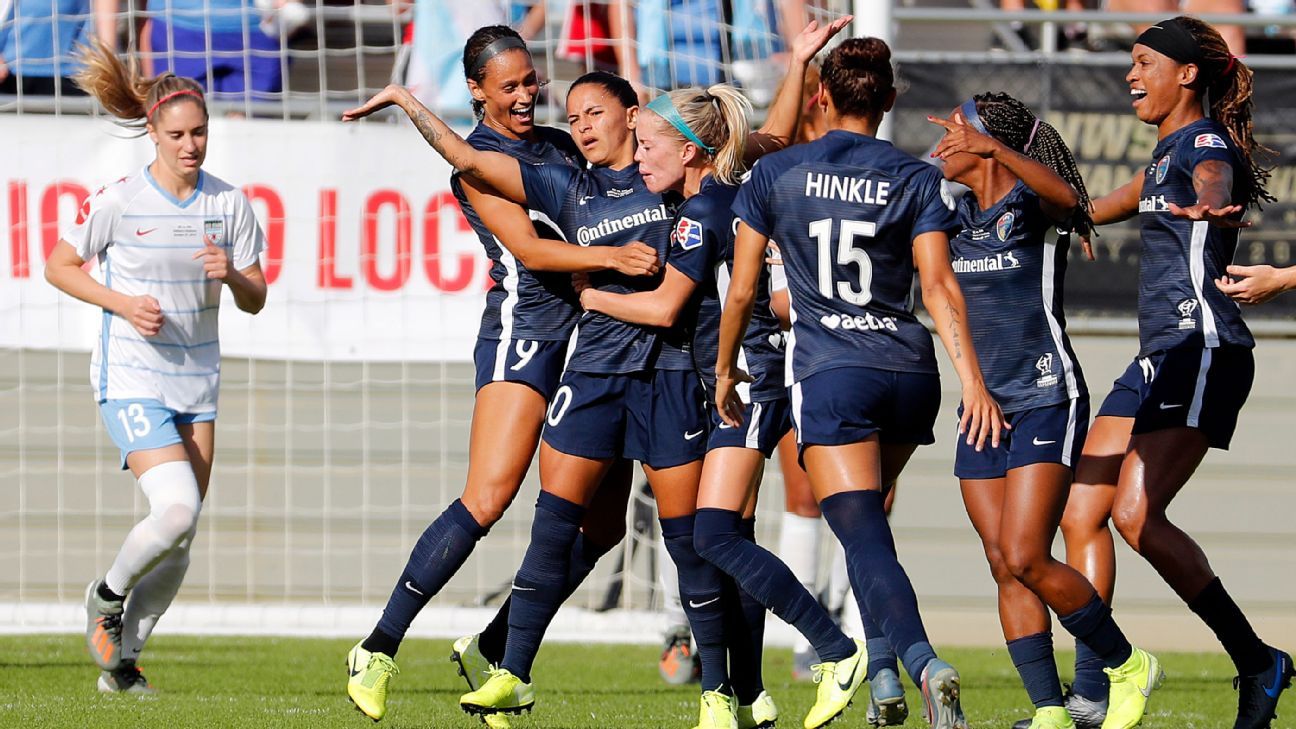 On Saturday, the National Women’s Soccer League will become the first American team sport to return to action amid the coronavirus pandemic. The league isn’t attempting a full season, instead aiming for the NWSL Challenge Cup.

Eight league teams — a ninth, the Orlando Pride, has withdrawn because of a run of positive coronavirus tests — are scheduled to play four regular-season matches each, then play in a seeded, single-elimination championship tournament.

Headlines heading into the monthlong event have mostly been centered around who isn’t playing. Not only did Orlando withdraw, but quite a few big-name American stars — OL Reign’s Megan Rapinoe, Portland Thorns FC’s Tobin Heath, Utah Royals FC’s Christen Press and Sky Blue FC’s Carli Lloyd and Mallory Pugh — are also sitting out the tournament due to injury or other concerns. Thirteen Australian national team members who played in the NWSL last season are out as well. All-world Australian forward Sam Kerr left the Chicago Red Stars for Chelsea last November.

These absences could dilute the overall product. But they could also give us an opportunity to take a look at the future of women’s soccer and the U.S. women’s national team.

It also gives us a chance to behold the dominance of the North Carolina Courage. They are both back-to-back NWSL champions — they destroyed OL Reign and Chicago by a combined 8-1 in last year’s playoffs — and also the team least affected by player absences. Because of the volatile nature of single-elimination tournaments, FiveThirtyEight’s Soccer Power Index ratings gave the Courage only a 26% chance of winning the NWSL Challenge Cup before Orlando’s withdrawal, but they are far and away the class of the league.

CBS and CBS All Access will broadcast every game of the regular season (which runs from Saturday to July 13) and every playoff game through the July 26 final. We look at every team in the field, focusing on who is playing, not who isn’t, and taking a look at each team’s most interesting young player and future USWNT member.

If you’re interested in either the present or future of the USWNT, the Courage are mandatory viewing.

Youngster to watch: Mace. The Courage traded veteran midfielder McCall Zerboni to Sky Blue FC for the rights to the 23-year-old former UCLA star who has already racked up pro experience at Melbourne City and FC Rosengard and could be a key central defender for the USWNT in the coming years.

Youngster to watch: Davidson. The 21-year-old Stanford product has seen quite a bit of USWNT action at defender since the World Cup. She’s a sure tackler and duel winner and an aggressive passer. If she plays herself into the U.S. lineup, that could give U.S. manager Vlatko Andonovski some interesting choices moving forward.

With new-addition central defender Becky Sauerbrunn from Utah and veterans like Meghan Klingenberg, Portland could lay claim to maybe the second-best defense behind North Carolina, at least if it doesn’t miss injured keeper Adrianna Franch too much. There’s not a ton of proven depth up front. U.S. starting midfielder Lindsey Horan and forward Christine Sinclair — the all-time leading scorer in international soccer and, at age 37, still a threat up front — are dangerous, but the Thorns’ success could be determined by whether forwards Sophia Smith and Morgan Weaver, the top two picks in the NWSL’s 2020 college draft, break through quickly.

Youngster to watch: Smith. If she plays, anyway. The 19-year-old has been a rising star for a while, scoring nine goals at the Under-17 World Cup in 2016, 24 in two years for Stanford and 21 in 25 matches for the U-20 team, but she’s coming off of an injury and will evidently be eased in.

The team from Tacoma, Washington, has changed a lot this offseason, taking on a rebrand (Olympique Lyonnais’ parent company became majority owner, hence the “OL”) and refreshing the roster by adding Houston regulars Amber Brooks and Sofia Huerta and Orlando’s Dani Weatherholt. Defender Alana Cook joins on loan from Paris Saint-Germain, too. The goal-scoring duo of Bethany Balcer and England’s Jodie Taylor return, as does veteran midfielder Allie Long. But like Washington, OL Reign could have greatly benefited from a full season to figure themselves out.

Youngster to watch: Balcer. What a story: Balcer played NAIA soccer and scored 129 goals in four years, got a Reign training camp invitation before the 2019 season and not only made the team but was named the NWSL rookie of the year. She saw training camp time with the national team this past winter, too.

Washington is young and aggressive. World Cup starter Rose Lavelle should anchor the midfield alongside Andi Sullivan and Jordan DiBiasi, none of whom is older than 24. New international additions Jenna Hellstrom (Canada) and Kumi Yokoyama (Japan) are entering their respective athletic primes, and the Spirit have accumulated five first-round picks from the 2019 and 2020 college drafts. Defender Sam Staab (No. 4 last year) logged over 2,000 minutes last season, while Ashley Sanchez (No. 4 this year) could challenge Ashley Hatch and Yokoyama for playing time up front.

Youngster to watch: Staab. The 23-year-old Clemson product is already one of the best passers in the USWNT defender pool and comes battle-tested — she played every minute for Washington in 2019, then went to Australia and played 12 matches for Western Sydney Wanderers.

Even without Press, the Royals might have the most veteran lineup in the NWSL Challenge Cup, featuring USWNT defender extraordinaire Kelley O’Hara (31), Spanish midfielder Vero Boquete (33), Canadian midfielders Desiree Scott (32) and Diana Matheson (36), keeper Nicole Barnhart (38) and forward/captain Amy Rodriguez (33), among others. Maybe that means good things in a small event like this, or maybe Harrington uses this tournament as an opportunity to give younger players such as defender Gaby Vincent or forwards Arielle Ship and Tziarra King an extended run.

Youngster to watch: King. The No. 8 pick in the 2020 college draft, King logged 48 goals and 19 assists at NC State. While it is unclear how much time she might be able to carve out in the rotation, she gets the opportunity to learn from quite a few steely veterans.

Houston saw even more of a roster overhaul than OL Reign, adding three Reign players led by defender Megan Oyster, plus Chicago defender Katie Naughton and Utah attacker Katie Stengel. Naughton is a particularly useful addition who, with midfielder Haley Hanson and veterans such as English goal scorer Rachel Daly and Canada’s Sophie Schmidt and Allysha Chapman, could help give this team a higher floor. But it’s hard not to see a pretty low ceiling, too.

Youngster to watch: Cece Kizer. A USWNT U-23 call-up and maybe the best player in Ole Miss history, the midfielder was taken 13th in the 2019 draft and played primarily as a substitute. In terms of goal differential, Houston was a much better team with her on the field, and she might get a decent run of action in this tournament.

Sky Blue has finished seventh or worse in four of the past five years, and they’re rebuilding around youth. They added exciting attackers such as Washington’s Pugh (who is out with injury), Portland’s Margaret Purce and OL’s Ifeoma Onumonu, and they spent their first-round pick on prolific USF forward Evelyne Viens. Veteran Zerboni was brought in from North Carolina to serve as a coach on the field, but this rebuild is probably going to take a while.

Youngster to watch: Purce. Granted, 24 is maybe a little too old to be a “youngster,” but Purce is the most exciting player on the active roster by far. She logged eight goals and an assist for the Thorns last season, but she’s versatile enough to play just about anywhere — her lone USWNT cap came at right back, for instance.

Hacked! – What Are Facebook Stickers? Everything You Need to Know