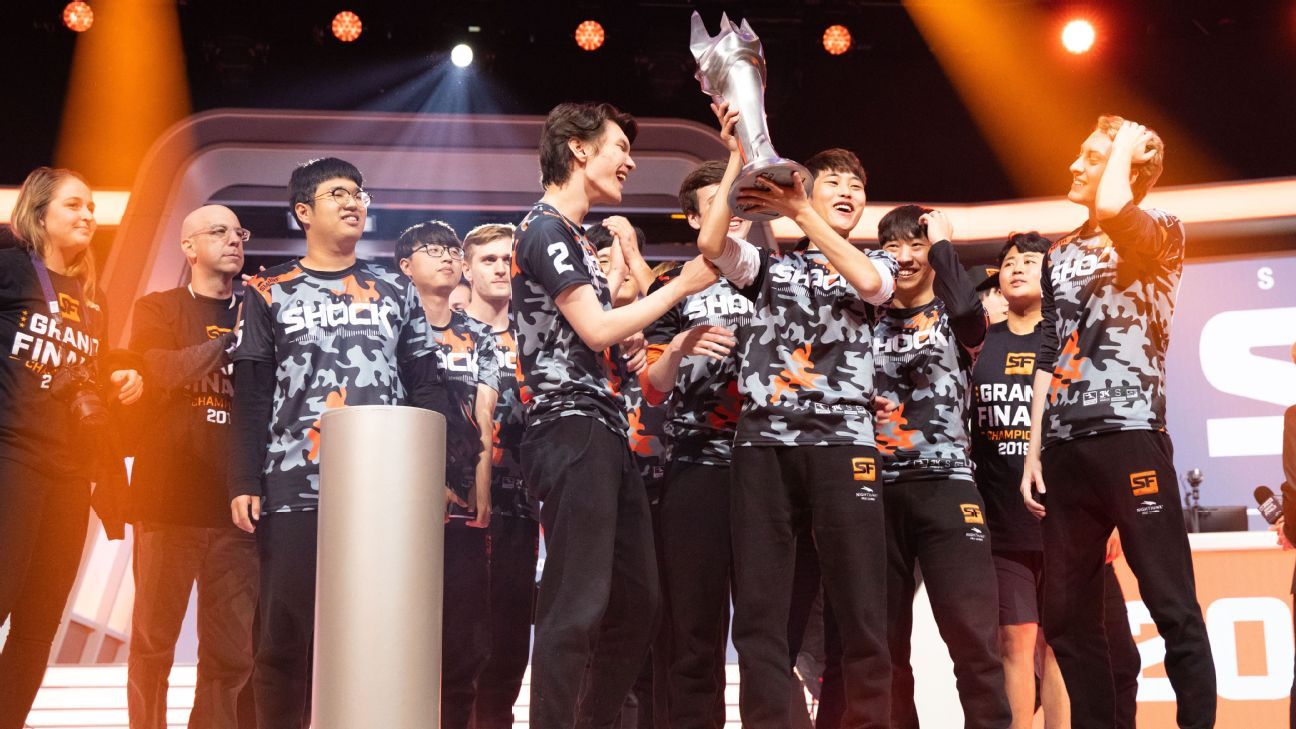 What were your biggest takeaways from the second weekend of playoffs?

Emily Rand: Three of these teams are fitting. The San Francisco Shock, Philadelphia Fusion, and Shanghai Dragons have been at or near the top of their respective regions all year. Even with the volatility of hero pools and meta shifts so quick that we’ll never know whether what was played on a particular weekend was actually the best composition statistically-speaking, these teams stayed strong through all of it.

And then there’s the Seoul Dynasty. We knew that at least one team could get here based on a quick meta read (or in the case of the Washington Justice, who nearly made it to the grand finals this weekend, a roster change). It’s surprising that it’s Seoul due to the team’s lack of consistency. All of those compliments I just paid the other three teams in the grand finals – remaining consistent throughout hero pools – don’t apply to Seoul. Seoul have always had the talent, but they haven’t always been able to adapt as quickly.

This isn’t to dunk on the Dynasty at all. It’s not like they came from nowhere – they even made it to the May Melee tournament finals earlier this year against none other than the Shanghai Dragons, who beat them again in another nail biting series that went all five maps. It’s a long way of saying that meta adaptation, in this case, really went a long way, especially with a team like the Dynasty who already had the talent in place.

Jacob Wolf: Like Emily, I’m surprised by the Dynasty’s appearance in the top four. I’ve hyped them up for a long, long time and they’ve let me down nearly every single time. But there’s definitely a change here and now we get to see them compete in the Top 4, in their home country, for the big title.

Seeing the Shock and Fusion make it out of North America isn’t the least bit surprising, nor the Dragons make it out of the Asian region. These teams’ consistency continued throughout the playoffs and I expect it to be a fun top four after seeing them all battle it out. Impressive work.

Ocal: With all of that said, everyone loves an underdog story. Seoul suffered one of the biggest reverse sweeps in esports this year at May Melee, ultimately falling 4-3 to the Shanghai Dragons. Shanghai had their number again at the Summer Showdown, and Seoul stumbled in the Countdown Cup. If you like the underdog story, you have three teams who everyone expected to make it this far in the defending champs San Fran, Philly and Shanghai, and now Seoul, the scrappy squad who impressively swept every team in the Asia Bracket to qualify (including bringing Shanghai to the brink in the Winners final, then dispatching NYXL in quick order).

What are the Dynasty’s chances of winning it all?

Rand: It’s really going to depend on meta. I was already a bit worried about Seoul in the later playoff rounds as they were the only team stubbornly sticking to Hog without the same flexibility shown by teams like, well, the Shanghai Dragons who beat them 3-2 in winners’ finals. The meta can still shift prior to the upcoming grand finals but as previously mentioned, I don’t have a lot of confidence in Seoul to be able to adapt – not as much confidence as I have in the other three teams in this grand finals. Then again, whenever I bet against Seoul, they always seem to win, so if the Dynasty take it all, we can revisit this paragraph and laugh.

More: How Roadhog is defining the Overwatch League playoff meta

Wolf: Low, in my opinion. I think the Dragons, Fusion and Shock are all better than the Dynasty but they have the talent to do it. It’s totally possible and we’ll see how the meta evolves but I wouldn’t bet on Seoul, even though I have all season.

Ocal: The underdog team always has the lowest odds on paper. Run the tournament 100 times and the other three teams would have the lion’s share of the victories. But we’re doing it once, and Seoul have a chip and a chair.

Will the Dragons complete their Cinderella story?

Rand: At this point I’m not sure if it is a Cinderella story per se. If this had happened last year with the Dragons continuing to ramp up, somehow making it into the grand finals after their Stage 3 finals victory as the meta shifted prior to the 2-2-2 role lock, maybe. Even then, most of the starting lineup that was part of the 2018 loss streak had already been swapped out.

In their grand finals qualifying match, the Dragons once again showcased their ability to quickly adapt. Main tank Lee “Fearless” Eui-seok ended up playing Roadhog on Havana with a double-sniper combination of Hanzo-Widowmaker and performed well despite the fact that he’s hardly known for the hero. Shanghai also have the recently-crowned league MVP Kim “Fleta” Byung-sun on their team. This isn’t a Cinderella story, but it would still be a remarkable achievement for Shanghai, Coach Moon “Moon” Byung-cheol, and the entire squad if they manage to take it all.

Wolf: I think so. Dragons look really good and it is a great story for the league in a world where they need all the good press they can get. Season 1’s worst team rebuilding to make a championship contender is a flashy headline. All that said though, I think it’s more than that. Fleta was a fantastic acquisition and the team as a whole looks stellar. I don’t know if it is a Cinderella story exactly, because they were not the worst team in Season 2, but it’s definitely something worthy of a nod. So hats off to the Dragons. Go get that trophy.

Ocal: I LOVE this story arc. It’s one of the best in esports and should be a feature documentary someday. A team goes from 0-42 to winning a World Championship across the life span of the Overwatch League. Give me the painful moments of that losing streak, the memes on social media, everyone laughing at their futility, and how the team reacted to it behind the scenes, to the roster changes, the team starts winning, wins homestands and tournaments, an epic reverse sweep, then a grand finals run during a pandemic … Hollywood couldn’t write a better script.

Chances of a Shock repeat?

Rand: Pretty high but not guaranteed. The Shock always seem to find a certain je ne sais quoi in the postseason, but I’m honestly still favoring the Shanghai Dragons overall – not only for the storyline, but because they’ve looked like the team with the strongest players, coupled with a coaching staff that has had the best handle on adjusting and adapting to the meta.

Wolf: Totally possible but I think that the Dragons are better. The Shock play in a worse region in my opinion and while their dominance and consistency is notable, I favor the Dragons. I’m not ruling a Shock back-to-back out of the equation but it’ll be a harder road for them than if the Dragons win out.

Ocal: My personal pick is Shanghai to win but I don’t think there would be too many shocked faces in the OWL scene if the Shock repeat. The Shock and NRG have been one of the flag bearers of OWL and would totally deserve it, especially with everything that’s happened this season, including losing their MVP to a totally different esport.

Will the Fusion finally get over the championship hump?

Rand: The Philadelphia Fusion remind me a bit of (and forgive my random League of Legends comparisons for a moment, please) 2018 Invictus Gaming in the LoL Pro League. iG had remarkable regular-season runs, only to be stymied in the LPL finals both splits by Royal Never Give Up, who powered up throughout the postseason. However, when it came to the world championship that year, it was iG who finally came out on top, winning the entire thing while RNG were eliminated in quarterfinals, unable to deal with a meta shift.

Wolf: Nope. Fusion have always been that team that can compete at the highest level but fail to win a trophy. Their season has been really fun to watch but I don’t anticipate that they will be able to beat either the Shock or the Dragons and I could see a world where the Dynasty even gives them a run for their money.

Ocal: Any New Yorker would love nothing more than to see Philly stumble at anything. A second championship final appearance and they couldn’t get the job done? They’ll cheer that for a New York minute. Of course, NYXL will be watching from home so they will be cheering for every team other than the Fusion. But Philly have looked great this season so they certainly have a chance.

Rand: Weirdly enough I can see the Shock falling to Seoul unexpectedly in the first round before making a losers’ bracket comeback and making it to grand finals from the bottom bracket. I think Shanghai will make it through the upper bracket, albeit with a few close victories, and take it all in the grand finals.