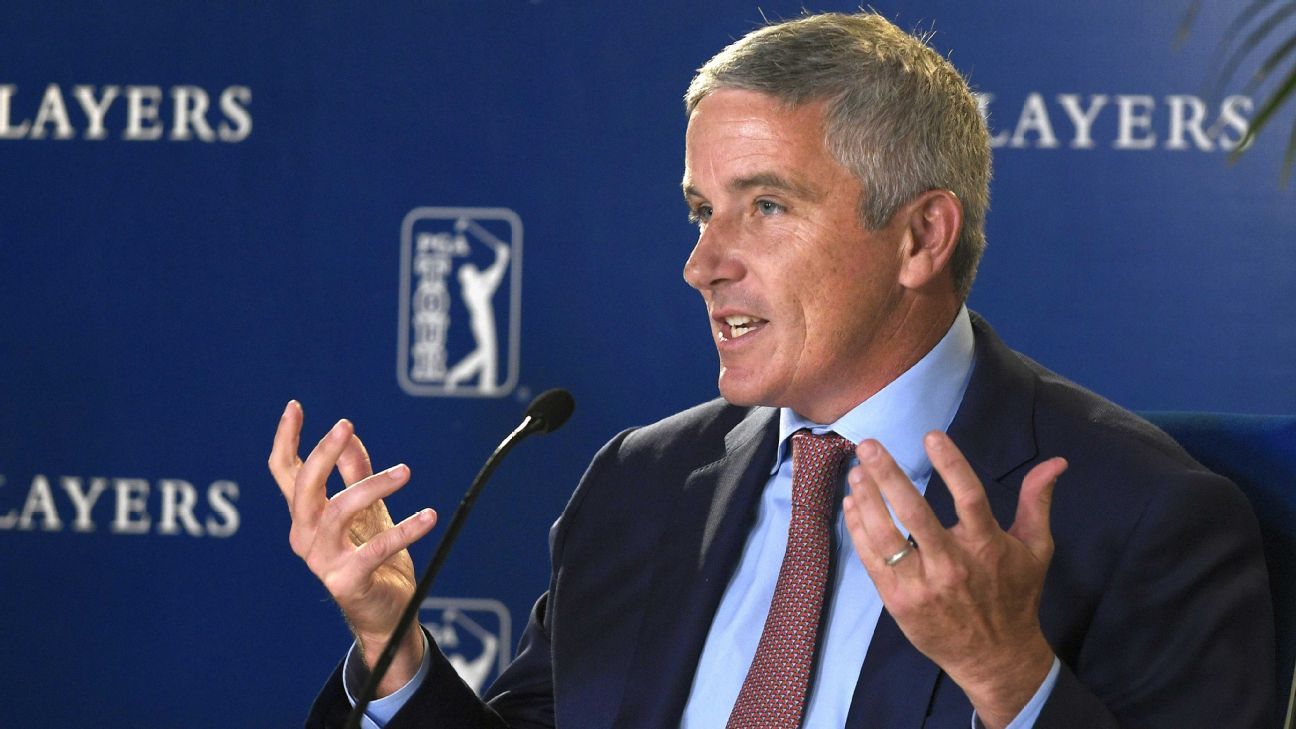 PGA Tour commissioner Jay Monahan said Wednesday that extra testing and stricter monitoring of protocols that could result in “serious repercussions” for offenders will go into effect in the wake of three positive coronavirus tests this week at the Travelers Championship in Cromwell, Connecticut.

Monahan said that across both the PGA Tour and the developmental Korn Ferry Tour, there have been 2,757 tests, with seven coming back positive.

“It’s a low number, and it’s a low number on a percentage basis. But every number hurts,” Monahan said at TPC River Highlands, where the Travelers Championship begins Thursday. “As we look at where we are now, I think we all need to remind ourselves that we’re learning to live with this virus, and we all need to learn to live with this virus — as individuals, as family members and certainly within our businesses.

Chase Koepka, Brooks’ brother, withdrew after getting into the field via Monday qualifying despite testing negative. Webb Simpson, who won the RBC Heritage on Sunday, also withdrew although he also tested negative.

Three positive tests — none by players — came on the first week back for the Korn Ferry Tour.

Monahan said there was no consideration of shutting down the Travelers Championship, nor would he give a number of positive results that would cause him to cancel any tournament going forward.

But he did stress again in the news conference and to players and caddies and those working the events that following the various protocols is essential to the tour being able to proceed in a safe manner.

“All of us have an extraordinary responsibility to follow those protocols,” Monahan said. “For any individual that does not, there will be serious repercussions, and I’m not going to get into the specifics of it.

“But everybody knows and needs to know that our future, our ability to sustain this business and to impact the communities where we play and to create so many jobs is contingent on our ability to follow those protocols. So when we have instances where someone hasn’t, they will be dealt with. And as I said, the consequences will be significant.”

“I love what he said. I love everything about the message that he gave today,” he told ESPN’s SportsCenter. “I’m at a bus — I’ve got an RV — so I’m having food at my house on the road, and I’m trying to do everything I can so we can all play golf. It’s not about me. It’s about our whole tour; it’s about our country watching live sports again. And getting some sports in our life is always good, so that’s what we’re trying to do.”

Monahan and the PGA Tour have sent constant reminders to the players and caddies about their duties to socially distance on the driving range, putting green and golf course, and to take sanitary measures with the flagstick and rakes.

Anecdotally, those warnings have been mostly ignored. During a weather delay Sunday at the RBC Heritage, dozens of players and caddies congregated at an outdoor patio area of the clubhouse. On the course, there is little regard for distance. And instances of flagsticks or rakes being wiped are rare.

And yet, the four positive cases associated with the PGA Tour can likely be traced to off-the-course interactions and do not appear to be due to any on-site interaction.

Watney, who had been home in Austin, Texas, after missing the cut at the Charles Schwab Challenge, tested negative when he arrived at Harbour Town last Tuesday. On Thursday, he had slight symptoms and an elevated respiratory rate on the Whoop fitness strap that he wears. He tested positive Friday.

Whoop, the company that manufacturers the wearable strap that tracks vital statistics, including respiratory rates, said the PGA Tour has procured 1,000 straps for players on the PGA Tour, Korn Ferry and Champions Tour. The device will not be mandatory, but it will be available.

“We are rapidly onboarding everyone in the PGA Tour universe and respect the measures that they are taking to keep the Tour safe,” Whoop CEO Will Amed said on Twitter.

According to Golfweek, Elliott was tested yet again after the positive test — his third test overall at the Travelers — and it came back negative. However, because of the first positive test, Elliott would not be permitted to work.

Monahan would not confirm Elliott’s third test was negative.

Monahan admitted that the lack of spectators — and that caddies and players know each other — has likely led to some complacency.

“I think over the first couple weeks, we’ve seen some instances where … let’s say we’ve gotten a little bit lax or away from protocol,” Monahan said. “Full disclosure: I’ve done it myself, and I think that’s the kind of tightening that we need to do in order to make sure we continue to be in a good position to move forward.”

Monahan cautioned there are likely to be positive tests going forward. Next week is the Rocket Mortgage Classic outside of Detroit, followed by two events in Dublin, Ohio — the second of which, the Memorial Tournament, is planning to allow spectators.

“I think this is the reality of what we’re all living under,” Monahan said. “For us, we are doing everything we can to make that not be the case. I don’t think anybody should be surprised. I’m certainly hopeful we won’t. But to be able to say that we’re not going to have any cases, and to be able to look in the eye and say we’re not going to have any cases would be disingenuous because we are all learning as we are going.”

Hacked! – The Caracal’s Got Super Jumping Game and Satellite Dish...

Hacked! – The Fairphone 3 is an Affordable, Ethical, Sustainable Must-Have

Sports Today – Brees: Job is to direct Saints, not rack up air yards

Hacked! – Google Will Now Admit When Its Search Results Suck

Sports Today – Can the rest of the Bucks step up and help Giannis?