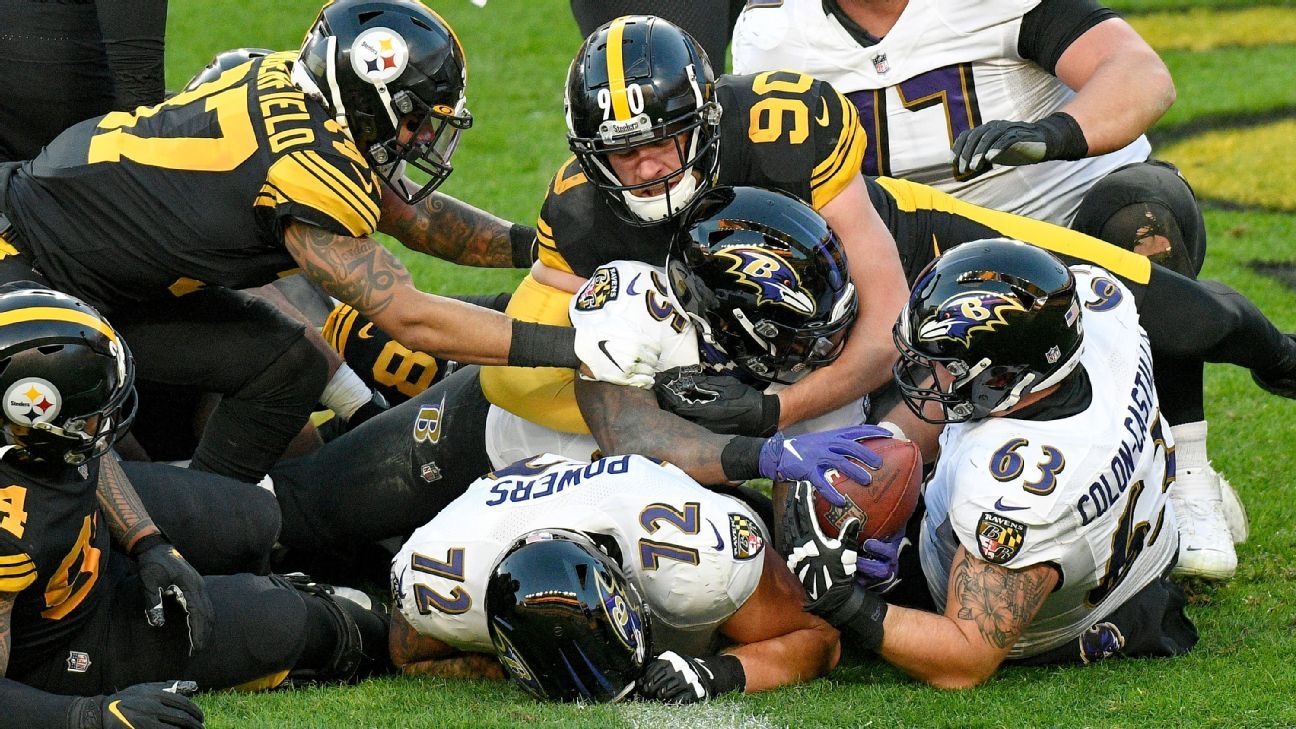 Some Baltimore Ravens players expressed frustration about what has become one of the largest COVID-19 outbreaks in professional sports.

After Wednesday’s 19-14 loss to the undefeated Pittsburgh Steelers, Baltimore players questioned a lack of preparation as well as some of the NFL’s decisions during a time when at least one Ravens player tested positive for 10 straight days.

“It’s not about whether or not guys want to play,” quarterback Robert Griffin III said after filling in for reigning NFL MVP Lamar Jackson, who tested positive last week. “It’s about whether or not our safety is actually being taken into account. I can’t say much more than that.”

The Ravens-Steelers game, which was originally scheduled for Thanksgiving night, was played six days later after three postponements. The last postponement came after Ravens players said in a Monday teleconference that they didn’t want to play the game Tuesday because of safety concerns, a source said. The source added that one suggestion from the players was to move the game to Thursday, but the NFL compromised by shifting it to Wednesday.

Baltimore was limited to walk-throughs on Monday and Tuesday after being shut out of its facility for five days. Griffin called the socially distanced walk-throughs “abnormal” and said they weren’t run at full speed. He believes the lack of full practices contributed to his getting injured in the second quarter.

Ravens players also had issue with the decision to reopen the team facility. After two Baltimore players tested positive following an overtime loss to the Tennessee Titans on Nov. 22, the NFL closed the Ravens’ facility Monday morning before allowing players and coaches to reenter Monday afternoon. The facility remained open until noon Tuesday. During that time, the Ravens held a walk-through, with players wearing masks.

“I don’t know what comes with me saying this, but, of course, on Monday and Tuesday, we’re wondering, ‘Why were we allowed back in the building if we say everything is based off contact tracing and things like that, and that’s what’s told to us?'” Ravens safety Chuck Clark said. “We’ve got to look at some of those things.”

Other players praised the Ravens’ organization for their handling of the situation.

“Everyone in the Ravens’ organization did the best thing for player safety they possibly could and to make sure this game happened,” guard Bradley Bozeman said. “The players wanted it to happen. The coaches wanted it to happen. But we were also concerned with safety, and I think they all did a really good job handling it.”

Said linebacker Tyus Bowser: “When you deal with something like this … we had a couple concerns. But I just know, with our president Dick Cass, [general manager] Eric DeCosta and coach [John] Harbaugh, they had our best interest, and they were trying to do everything they could to get us ready for this game.”

Since Nov. 23, the Ravens have placed a total of 23 players on the reserve/COVID-19 list for either testing positive or being identified as high-risk close contacts. Baltimore has reduced that list to 17 players currently, but it had to promote 10 players from the practice squad Wednesday to fill out a 48-man game-day roster.

Harbaugh said it was an emotional time for the team, and he said everyone did their best to be transparent and honest in answering players’ questions.

Some players experienced symptoms, but no one became seriously ill, according to Harbaugh. Infected players did pass the coronavirus to family members, Griffin said.

Jackson, who tested positive on Thanksgiving, will complete his 10-day quarantine on Saturday. If he tests negative, he will be available to play in his team’s game Tuesday against the Dallas Cowboys.

“He’s in good spirits,” said Ravens wide receiver Marquise “Hollywood” Brown, who is Jackson’s close friend. “He told us to go out there and try to win this game. Just wishing for a speedy recovery for him.”

Sports Today – Klopp: I don’t feel the pressure ahead of Man Utd

Sports Today – Klopp: I don’t feel the pressure ahead of...

Hollywood Today – Kourtney Kardashian Perfectly Responds to Comments About Her Friendship With Addison...

Sports Today – An FSU-Miami game always brings the unexpected, and 2020’s clash is...