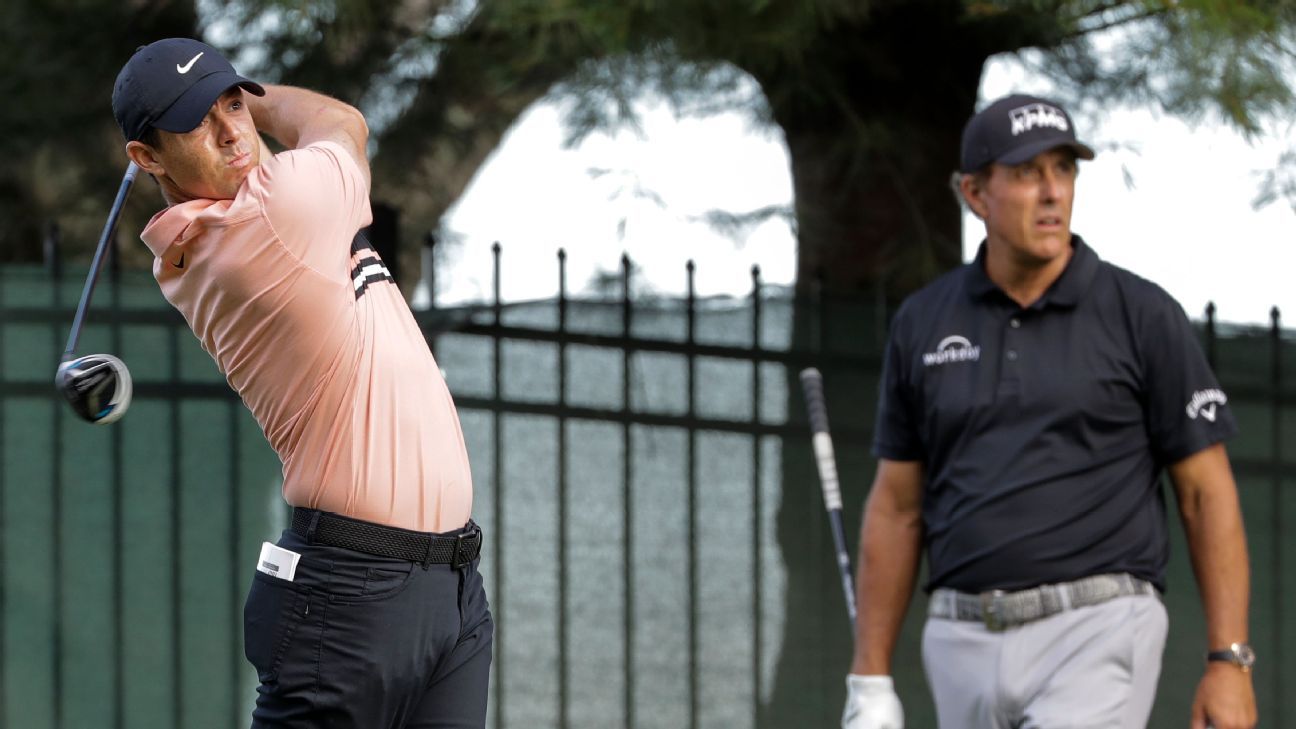 Bubba Watson said it out loud the other day.

Do PGA Tour professionals care who they play with? Does it matter to them at all? Do they even pay attention when the featured groups are announced every Tuesday and the full tee time list comes out on Wednesday?

“Yes, it matters tremendously,” Watson said. “There’s guys that are a shot, maybe a 2-shot penalty when you see their name on that sheet. Maybe that’s what they say about me, too, so I guess it works both ways. I like to have fun and be energetic. You know, when you see a certain name, you know you can joke around, you know you can have fun and kind of get away from the stress and not talking and just walking down the fairway.

“You know, yeah, I look forward to seeing who the pairings are, and sometimes I start praying early trying to get a good one.”

The Travelers put together a few good ones this week. Sometimes it works out, sometimes it doesn’t. The first marquee group out Thursday morning — Rory McIlroy, Phil Mickelson and Bryson DeChambeau — put on a show. It looked good, it just sounded different.

Normally, TPC River Highlands would have featured a steady buzz as McIlroy grabbed an early share of the lead with a 7-under 63. (He was later surpassed by Mackenzie Hughes‘ opening-round 60). Mickelson and DeChambeau posted matching 64s. Instead of roars, though, there was silence as the three put on a show no one saw — unless they were signed on to a computer, iPad or phone, or have a house within shouting distance of TPC River Highlands.

“It still is very different,” McIlroy said. “Everything is so different, from the surroundings, the routine. [The coronavirus pandemic is] not behind us, obviously. We’re still right in the middle of this. But it’s just been nice to get back into some competitive golf again. You know, it doesn’t feel the same because you’re not having thousands of people reacting to your birdies and getting that going.”

Here’s how it went down:

He barely made the cut last week at the RBC Heritage, slipping in 2 strokes under the number. Oddly, that might have been what led to Thursday’s 63.

“The two rounds last week at the weekend were very helpful for me coming into this week,” McIlroy said. “It would have been terrible to miss the cut and not have those two rounds — not as practice, because you’re sort of trying to get yourself into contention, but at the same time there’s so much big stuff coming up at the end of the year, and that’s really what you’re trying to build towards.”

Starting on the back nine, he eagled 13, his fourth hole of the day, then birdied 14 and 15. With four more birdies on his second nine of the day, it all added up to 64.

The aggressive play pays off.@McIlroyRory closes with birdie and opens the @TravelersChamp with a 7-under 63.#QuickHits pic.twitter.com/F9nie6CeKz

Since returning from the shutdown, seven of his nine rounds have been under par and he has gone 66 or better four times.

Sure, he shot 64. And he’s in the mix, trying for career win No. 45 and his first since turning 50 nine days ago. But his day was already going well long before he signed his scorecard. On Thursday, the USGA announced its exemption criteria for this year’s U.S. Open at Winged Foot. Just like that, Mickelson was in the field. Up until that point, he was on the outside looking in.

“No, that worked out great, to be able to know that I have a chance to go back to Winged Foot and give it another shot,” said Mickelson, who had one of his many painful near misses in the U.S. Open at Winged Foot in 2006. “But I’ve had 30 U.S. Opens. I’ve had plenty of opportunities.”

On top of that, all he did was go out and fire a six-birdie, no-bogey 64. And it was even more fun with McIlroy and DeChambeau along for the ride. “So, I love what I do,” Mickelson said. “I love my job. I love trying to play and compete, and I really enjoy playing with guys like Rory and Bryson who are just tremendous talents. I also enjoy trying to play my game and compete regardless of age.”

He has been the talk of the golf world because of his new eat-whatever-he-wants-whenever-he-wants, hit-it-far plan. Mickelson, seeing it up close, was impressed.

“Yeah, I definitely feel like I can let it go a lot more,” DeChambeau said earlier in the week about the freedom to swing away at TPC River Highlands.

Nine times in Thursday’s first round he hit drives more than 300 yards, five of them traveling more than 330. He entered the tournament second in driving distance behind Cameron Champ, who had to withdraw after a positive coronavirus test.

“Bryson has got a unique style of playing that is fascinating, and he plays at the highest level,” Mickelson said. “I enjoy kind of watching and learning.”

In the first post-shutdown event, DeChambeau finished T3 at the Charles Schwab Challenge, then was T8 at the RBC Heritage.