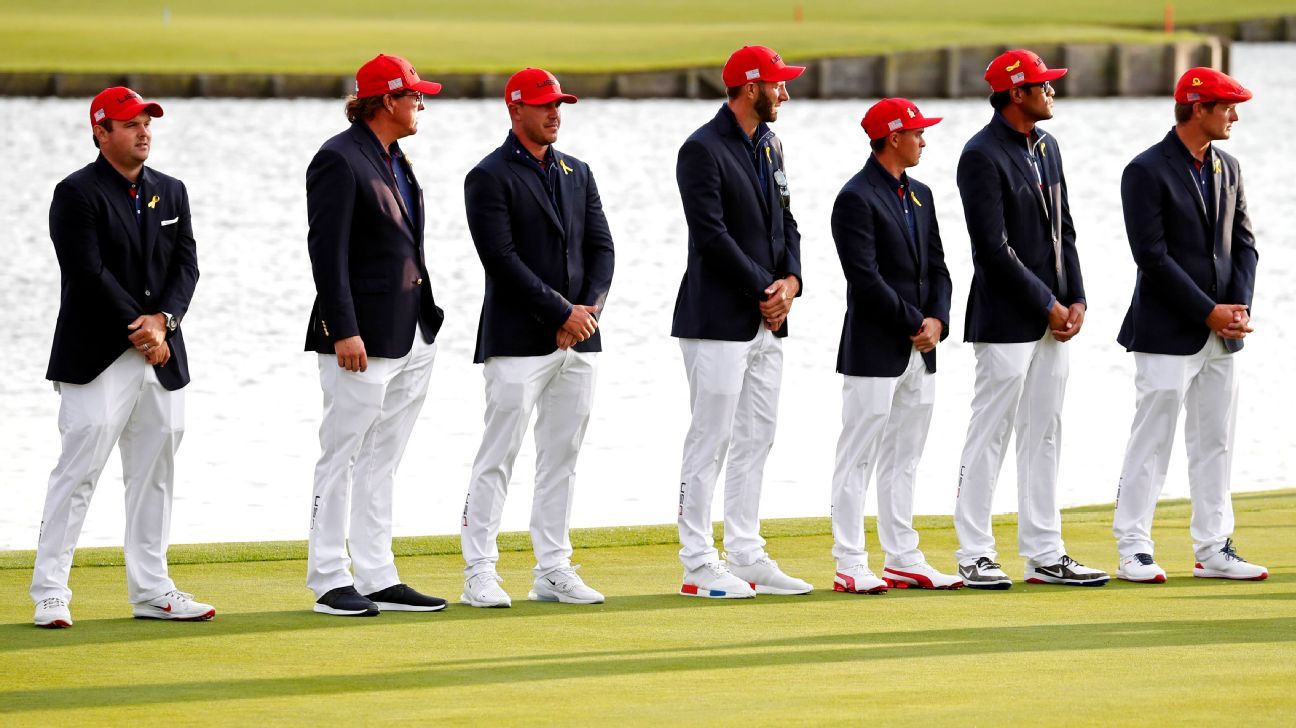 The decision has loomed for weeks, and the PGA of America made it official Wednesday when it postponed the Ryder Cup and Presidents Cup for a year because of the coronavirus pandemic.

“As disappointing as this is, our mandate to do all we can to safeguard public health is what matters most,” PGA of America CEO Seth Waugh said in a statement. “The spectators who support both the U.S. and European sides are what make the Ryder Cup such a unique and compelling event and playing without them was not a realistic option.”

The Presidents Cup, originally slated to be played in 2021 at Quail Hollow Club in Charlotte, North Carolina, will now be held Sept. 22-25, 2022.

“Unlike other major sporting events that are played in existing stadiums, we had to make a decision now about building facilities to host the 2020 Ryder Cup at Whistling Straits,” Waugh said in his statement. “It became clear that as of today, our medical experts and the public authorities in Wisconsin could not give us certainty that conducting an event responsibly with thousands of spectators in September would be possible. Given that uncertainty, we knew rescheduling was the right call.”

British newspapers the Telegraph and the Guardian reported weeks ago that the Ryder Cup would be postponed, but getting to this point required the cooperation of numerous entities, including the PGA Tour and the European Tour.

“There’s a lot of behind-the-scenes things that people don’t know,” a source told ESPN on Tuesday. “They have to look out for the best of each organization. I think there is way more to it than people would realize.”

The biennial competition between the United States and Europe was, like all other sporting events during this time, grappling with the ideas of playing with limited spectators or none at all, postponing or canceling the three-day event at Whistling Straits.

Given the uncertainty of the situation less than three months before the scheduled event, PGA of America officials decided to postpone it to next year after negotiating with the PGA Tour to move the Presidents Cup.

The idea of a spectator-less Ryder Cup was particularly unappealing to many of those who would take part in it.

“When you think of the Ryder Cup you think of the distinctive atmosphere generated by the spectators, such as around the first tee at Le Golf National two years ago,” European captain Padraig Harrington said. “If that cannot be responsibly recreated at Whistling Straits in September, then it is correct that we all wait until it can be.”’

Harrington and U.S. captain Steve Stricker both expressed disappointment with the possibility, though Harrington came around to the idea of “taking one for the team” in order for the European Tour to reap the financial rewards of a televised competition.

Many players did not like the idea of proceeding with a closed Ryder Cup, particularly Rory McIlroy.

“The players are the ones that make the Ryder Cup,” the European star said in May. “If they are not on board with it and don’t want to play, then there is no Ryder Cup. I see it being pushed back until 2021, and honestly, I think that will be the right call.”

It was not an easy call. First, there was the matter of forgoing significant television rights fees this year, spectators or not. The PGA of America is already scheduled to play the PGA Championship, held Aug. 6-9, without fans, a huge financial hit to the organization of 28,000 club professionals.

Then there was the issue of moving a European Ryder Cup, scheduled for Italy in 2022, back a year. The European Tour relies significantly on profits from home Ryder Cups to operate on an annual basis.

Not to be forgotten is the PGA Tour. Although the tour has no stake in the Ryder Cup, its players are participants. After taking a huge financial hit in 2020 and losing millions of dollars because of a 13-week break from tournament golf, the idea of forgoing a lucrative Presidents Cup could not have been pleasant. It is unclear whether a financial arrangement between the PGA of America and PGA Tour was reached.

PGA Tour commissioner Jay Monahan spearheaded the effort to get the various golf bodies together in April to map out a schedule, allowing the major championships to pick their dates, with the PGA Tour then working its schedule around them. For example, the Aug. 6-9 PGA Championship dates were originally held by the Wyndham Championship; the tour subsequently moved it and the three FedEx Cup playoff events to be a week later on its revised schedule.

Part of the long process to get to this point was to rework various contracts the PGA of America, PGA Tour and European Tour had with vendors, hotels and myriad other entities involved in putting on big sporting events.

The Ryder Cup, which began in 1927 and is played every other year, was not played from 1939 through 1945 — a period of four Cups — because of World War II. It was postponed one other time in the aftermath of the Sept. 11, 2001, terrorist attacks. The tournament was pushed back a year, and the Presidents Cup followed.

“I want a Ryder Cup with full capacity,” England’s Paul Casey said last month as this decision loomed. “I want it with screaming fans. I saw the headlines. … I fully support that. Even as a European, knowing how loud that would be for the American team, that’s what I want. We want to play a Ryder Cup in that environment, in that cauldron, and [postponing] is the right thing to do.”

Sports Today – Stricker hopes Tiger can be part of Ryder...