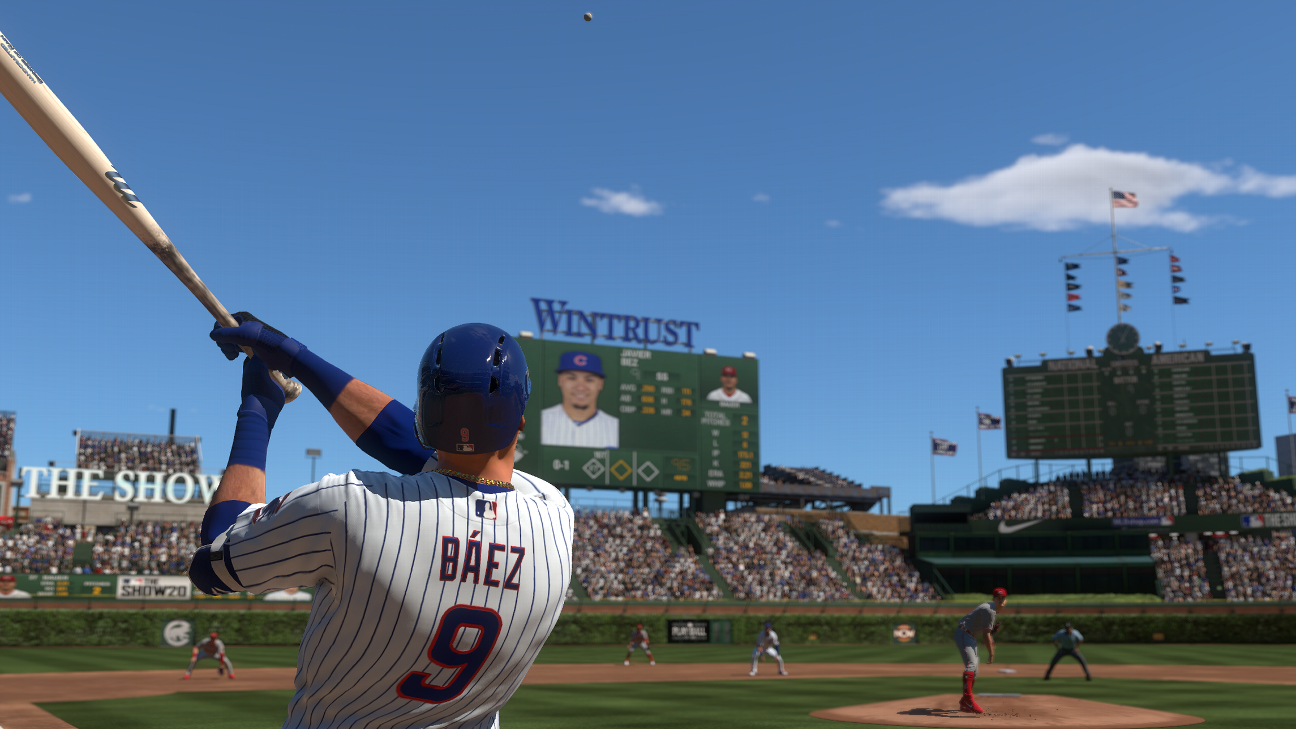 MLB The Show 2020 features the precision mechanics, deep franchise mode and character-building Road to the Show improvements expected with each new edition.

You know what else The Show lets you do? Predict the future. Kind of.

Simulating games in a 162-game season, complete with minor league matchups and free-agency and draft elements, is nothing new to players. With MLB considering a new playoff format and some influential free-agency periods in the years to come, we wanted to know what the big leagues will look like 10 years from now, and we got some great answers.

Multiple Chicago Cubs World Series victories? Aaron Judge to the Los Angeles Dodgers? Bryce Harper getting sent to the minors? Yeah, those happened. Here’s a look at the results from our decade-long simulation of the majors, from the not-so-surprising to the hysterical.

Read more: How coronavirus is affecting esports and gaming | First impressions of Call of Duty’s Warzone

The Cubs enter the season with the usual questions around their pitching staff and concern about whether their batting order will ever be the same, but The Show cover athlete Javier Baez leads the team in an outstanding first half. Seeing an opportunity, the Cubs trade for Marcell Ozuna from the Atlanta Braves and aim for a pennant.

Chicago gets more than that, though. With a mind-blowing Cy Young year from Jon Lester and rock-solid relief pitching, the Cubs shake off their usual woes on the mound and breeze right through the National League all the way to the World Series. They meet the Houston Astros, and Jason Heyward goes off with a .475 batting average and three home runs in a 4-2 Series victory.

The Astros’ bittersweet post-sign-stealing season doesn’t deter them. Houston runs it back with the same lineup, and Yordan Álvarez has one of the best seasons in MLB history for a position player, with a 12.4 WAR, 1.189 OPS, .361 batting average, 59 home runs and 136 RBIs.

The New York Yankees have other plans, though. They beat Houston 4-3 in the American League Championship Series and top Harper and the Philadelphia Phillies to win their 28th world championship. Gerrit Cole, James Paxton and former Dodger Alex Wood lead the team through the postseason, and Judge wins World Series MVP honors.

A slew of notable players retire after the season’s end, including Albert Pujols, Miguel Cabrera, Kendrys Morales and Cole Hamels. Cabrera and Pujols are selected as first-ballot Hall of Famers.

Free agency features all kinds of craziness, with the Chicago White Sox signing Clayton Kershaw to a five-year, $96.3 million deal to start it all off. Kyle Schwarber winds up on the San Francisco Giants, Francisco Lindor goes to the Boston Red Sox, Carlos Santana is moved around in three separate deals, and, most notably, the Minnesota Twins see a window.

The Twins spend big on Freddie Freeman and snag Baez on a seven-year, $144.4 million deal in a matter of days, putting the league on notice and setting themselves up for a World Series run. The moves pay off, and Minnesota beats the Milwaukee Brewers behind Jorge Polanco‘s .563 batting average in a 4-3 thriller of a Series.

Robinson Canó, Justin Verlander and Yadier Molina retire in the offseason. Canó makes the Hall, but Molina doesn’t, leading MLB commissioner Rob Manfred to go into hiding for the rest of the decade.

The Dodgers look for another player to break their 35-year title drought, so they take aim at Judge and add the right fielder to a star-studded roster on a deal that matches Baez’s with the Twins. The surprise of the season, though, is a 20-game win streak to end the season for the Cubs, who upend the Dodgers in the National League Championship Series and set up a rematch of the 2016 World Series with the Cleveland Indians.

Chicago jumps out to a 3-0 lead in the series, but Cleveland battles back only to lose in extras in Game 7 once again. Willson Contreras hits seven home runs in the World Series, following which Zack Greinke and Hunter Pence hang it up.

The Cubs aren’t done yet. Chicago picks up Shohei Ohtani and Whit Merrifield, with the former Royal supplanting Kris Bryant and Anthony Rizzo as the best hitter on the team. Harper has one of the best seasons of his career and wins MVP honors, and Rhys Hoskins does his part, but the Phillies fall to Chicago in a seven-game NLCS. The Cubs then sweep the Astros in the World Series for yet another title for the Lovable Winners.

A whole slate of memorable names end their careers, with Yu Darvish, Josh Donaldson, David Price, Max Scherzer and Justin Turner retiring. Scherzer eventually earns a spot in the Hall of Fame, with Donaldson right behind him.

Not much happens in free agency, with Corey Seager going to the Yankees as the only big move of the offseason. Houston, after laying low for two years, absolutely destroys the AL with 110 wins, the most in the majors since the Seattle Mariners put up 116 in 2001.

The Astros beat the Dodgers in a rematch of the 2017 World Series, with former Oakland Athletics outfielder Ramon Laureano leading the charge. Among the big-name retirees this year: Matt Carpenter, Aroldis Chapman, Corey Kluber, Buster Posey and Adam Ottavino.

Three-time All-Star pitcher Brendan McKay gets a six-year, $130.6 million deal to head to Boston, and Vladimir Guerrero Jr. goes to the Los Angeles Angels in a move that will change the MLB landscape in a few years. Houston is still in the middle of a moment, though, and once again cruises through the AL with 103 wins. McKay and the Red Sox push the Astros to seven games in the ALCS, but Houston breezes to a 4-0 sweep of the Cincinnati Reds in the World Series.

Justin Upton steps away from baseball and earns first-ballot Hall of Fame honors after an 18-year career, while another presumed Hall of Famer catches a tough break.

Philadelphia spends the entire season looking for ways to shop Harper, whose performance fell off a cliff after an injury late in 2025 and got even worse this season. No one is willing to pay $20 million-plus for a middling outfielder, though, and Phillies fans start looking back at that 13-year deal with even more frustration.

A flurry of offseason moves includes Carlos Correa going to the Pirates, one of the league’s best third basemen in Ke’Bryan Hayes moving to the Giants, Xander Bogaerts heading to the Braves and Schwarber going to the still-lowly New York Mets.

McKay continues to dominate the league and wins his second Cy Young in three years, but Boston continues to fall just short. The Detroit Tigers win the World Series after picking up former White Sox left fielder Eloy Jimenez and K.J. Harrison, who rose through the Washington Nationals‘ farm system over the years to become a World Series MVP.

Retirement claims a bunch of big names this year, including Jacob deGrom, Zack Britton, Starlin Castro, Chris Sale, Andrelton Simmons and Stephen Strasburg. The only player to become a first-ballot Hall of Famer, though, is J.D. Martinez, who ended his career with a .302 batting average, 427 home runs and 1,286 RBIs.

Can Boston finally end its 10-year title drought? The Red Sox certainly make a case by putting up the most first-half wins in history behind sub-4 ERAs from McKay and three other starters. In a stunning move, Boston gets rid of Lindor at the break, and the decision hurts the Red Sox come October.

This, it turns out, is Mike Trout‘s year. The perennial contender for best player in baseball finally wins a title with the help of Guerrero and former Baltimore Orioles standout Austin Hays. Trout does Trout-like things and leads the postseason with a .361 average, seven home runs and 22 RBIs in the playoffs.

Kershaw, a shoo-in for the Hall of Fame, retires and gets the nod on his first ballot. He ends his career with 282 wins, a 2.85 career ERA, and 3,827 strikeouts. He never wins a World Series.

The Tigers are back, and no one can stop them. Detroit signs former Miami Marlins second baseman Isan Díaz, who forms a dynamic lineup alongside Jimenez and two-time Hank Aaron award winner Vidal Brujan, who came up through the Tampa Bay Rays‘ farm system. The Tigers sweep every team they meet in the postseason and begin to settle in for a dynastic few years.

The 2029 Hall of Fame class features a near-unprecedented four first-ballot selections: Paul Goldschmidt, Freeman, Anthony Rendon and Rizzo, who finished his career with four World Series titles. The retirement of Goldschmidt, Freeman and Rizzo ends a golden age for first basemen in the league.

The Tigers win another World Series, with MLB MVP Jesus Sanchez putting together the best season of his career by far. Sanchez posts a single-season WAR of 9.2 in his 10th MLB season, dwarfing his previous best of 2.0 WAR.

The team has another feel-good story, too: Cuban player Hasuan Viera, who toiled in MLB farm systems for most of his career, is finally called up at 34 and wins Rookie of the Year in the AL. He bats .529 in the World Series and wins MVP there, too.

Aaron Nola, Jorge Polanco and Hunter Renfroe retire, and Harper is just about there, too. At 38, he’s making $25.4 million playing Double-A ball with the Reading Fightin Phils. He hasn’t seen time in the majors since 2028.

Hacked! – Too Busy to Read? Use These Educational Audio Courses Instead