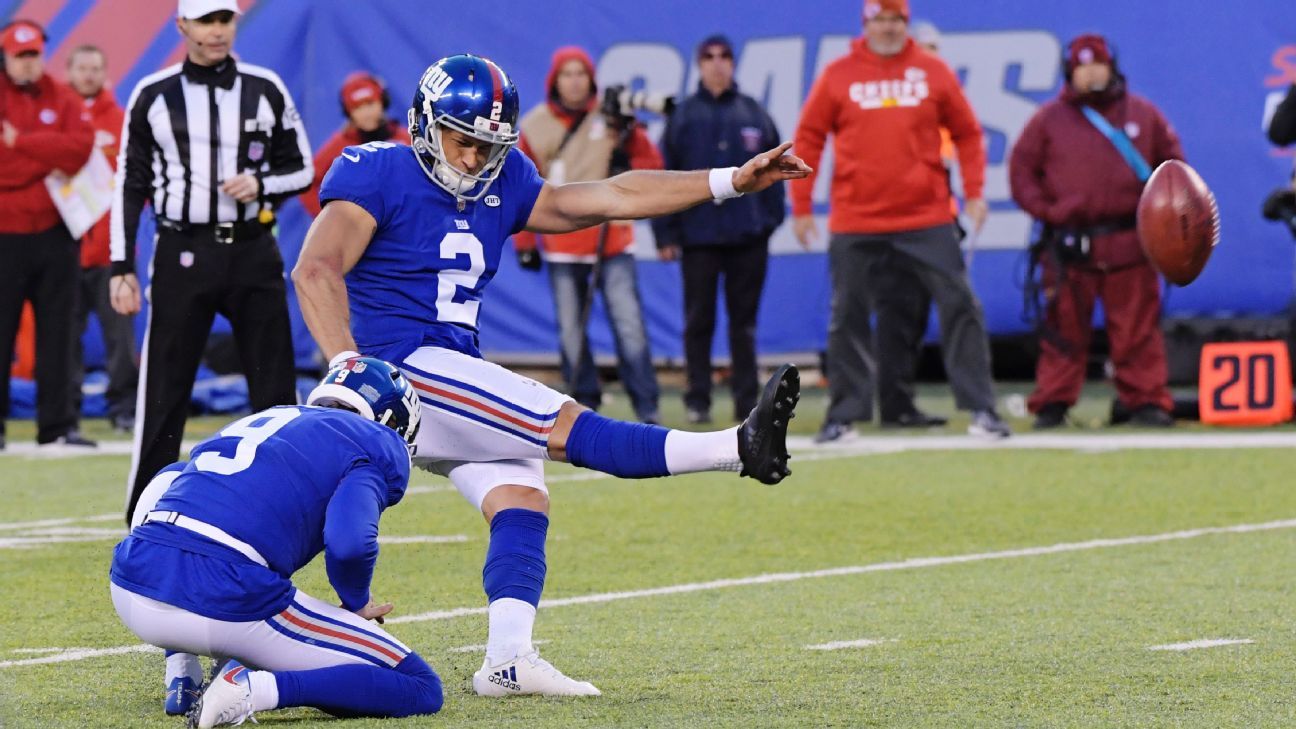 The New York Giants are releasing Pro Bowl kicker Aldrick Rosas just days before the start of training camp after an incident earlier this summer, according to multiple sources.

Rosas, 25, was charged with three misdemeanors stemming from a June 15 hit-and-run accident. He faces charges of reckless driving on highway, hit-and-run property damage and driving while suspended/revoked for DUI of alcohol/drugs.

Rosas still could face discipline from the NFL. The league has indicated in recent weeks that the matter remains under review.

While Rosas is set to be released, the expectation for second-year cornerback DeAndre Baker is that he lands on an exempt list. Baker faces four counts of armed robbery and four counts of aggravated assault with a firearm. The alleged robbery occurred during an illegal dice gambling game at a Miramar house with 15 to 20 occupants in attendance, a source told ESPN’s Cameron Wolfe. A commotion ensued after parties were accused of cheating with “loaded dice,” the source said.

Rosas’ trouble with the law also comes on the heels of a rough 2019 season. Rosas made just 12 of 17 field goal attempts (70.6%). He was re-signed as a restricted free agent for $3.3 million this offseason after the Giants used a second-round tender on him.

It has been a precipitous fall for Rosas, who made the Pro Bowl following the 2018 season. He made 32 of 33 field goals (96.9%) that year in a breakout season. The former undrafted big-legged kicker out of Southern Oregon had worked his way onto the Giants’ active roster in 2017.

Now, new coach Joe Judge is searching for a place kicker and trying to avoid the ring-around-a-kicker routine he employed last year as the special teams coach in New England. The Patriots used three different kickers last season after Stephen Gostkowski was injured. They finally settled on veteran Nick Folk for the final seven games of the season.

Folk and Gostkowski are currently free agents, and could be options to replace Rosas with the Giants given their familiarity with Judge.

Giants veterans are scheduled to report to training camp on Tuesday.

Rosas was driving a black Chevrolet SUV one morning last month when a T-bone collision occurred. Witnesses saw Rosas driving erratically over the double yellow lines and at a speed estimated to be 100 mph when he ran a red light and hit a Ford pickup truck, according to the police report.

Rosas allegedly attempted to drive from the scene of the crash before his vehicle became disabled. He exited and fled the scene on foot without shoes.

Officers went to Rosas’ home after the scene was cleared. The 2018 Pro Bowl kicker was not there, but was later stopped walking on the side of a road with his hands, legs and bare feet covered in blood. Rosas eventually was treated for minor injuries at Enloe Medical Center and later booked into Butte County Jail.

The police report originally stated that alcohol impairment was believed to be a factor. But there was no mention of any breathalyzer or blood test.

None of the charges that were filed earlier this month reflected alcohol being involved.