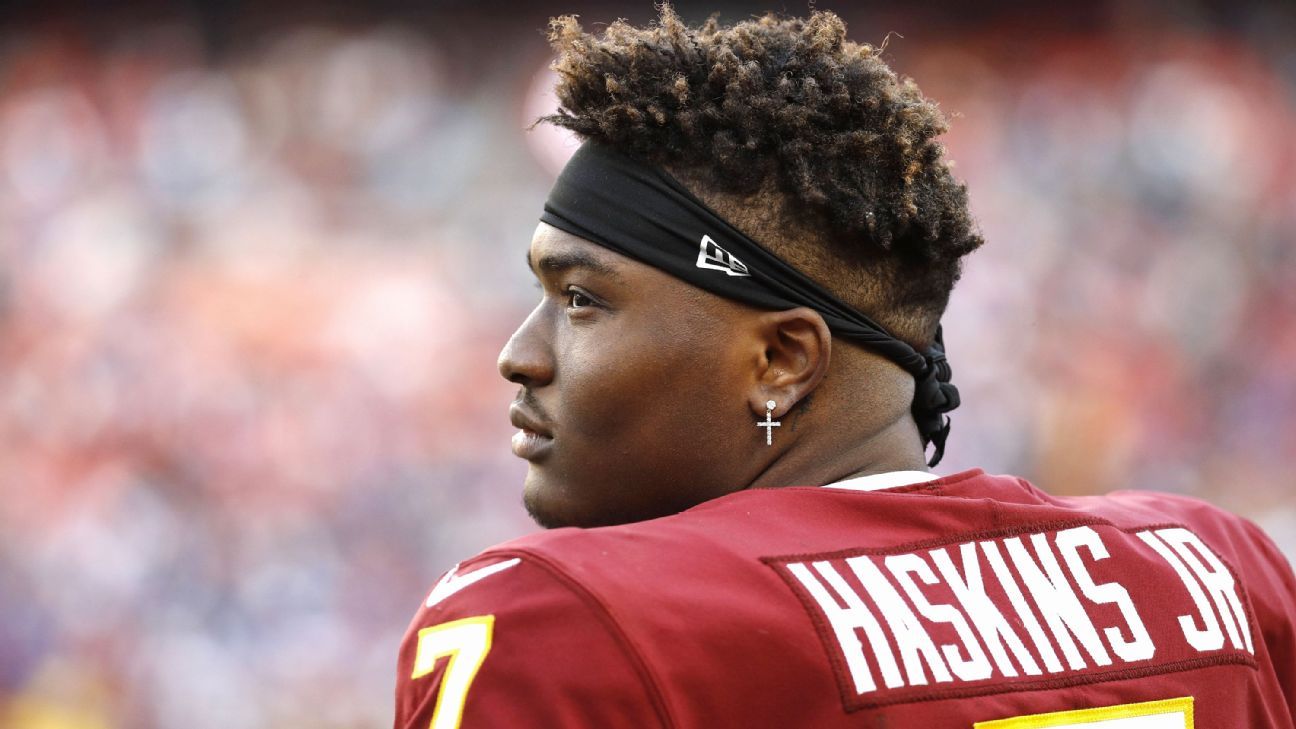 So Rivera benched Dwayne Haskins and inserted Kyle Allen as the starting quarterback for Sunday’s game against the Los Angeles Rams. Rivera used to have an eye on the future with Haskins; now it’s on a division whose first-place team, the Philadelphia Eagles, is 1-2-1.

“We’re in a situation where if we’re still trying to teach one guy and the other 52 aren’t given an opportunity to see if we can win, then that’s not fair,” Rivera said. “If someone [in the division] was 4-0 or 3-1, OK. But there’s a chance to win the division. You have to look at it that way.”

After the Rams game, Washington plays the winless New York Giants twice in four weeks, in addition to games against Dallas, Detroit and Cincinnati, three teams that are a combined 3-8-1.

Rivera finalized his decision Tuesday night and told the quarterbacks Wednesday morning. Haskins was demoted to third string with Alex Smith now in the No. 2 role. Smith had been inactive for the first four games.

The move was surprising, but not shocking, because of a weakened NFC East. Also, Allen’s familiarity with the offense played a crucial factor. He spent two years in Carolina under Rivera and current Washington offensive coordinator Scott Turner. Allen started 12 games for the Panthers last season.

“The kid has an NFL arm,” Rivera said. “But right now there’s a chance. Some may not agree with me. That’s fine. But for me and this team, I’m taking my shot. I’m here to win, and now we have an opportunity to find out if we can win.

“I could be wrong; I could be right. We’ll see what happens.”

Rivera made it clear after he was hired that he liked Haskins’ talent but wanted to see more — first in terms of leadership, but also on the field. One source said the new staff liked Haskins’ arm talent and size and felt he would be a good fit in Turner’s system, which called for attacking down the field.

But Rivera stressed that a shortened offseason and lack of preseason games played a role in Haskins’ slow growth in the first four games. He started only seven games as a rookie and, with a new system, needed more time on the field. Both Rivera and Turner said it wasn’t about being unable to use the entire playbook as much as his limited reps in the system.

“There were mistakes that showed up that were repeat mistakes,” Turner said. “It goes back to his development. Sometimes it’s good to take a step back and assess what you’re doing and not to just get lost in the shuffle of the week-in, week-out grind. That can be detrimental to a guy’s long-term growth.

“You want to make sure you’re not forming bad habits. It wasn’t all bad. … This doesn’t mean [this] is the end of the road. It’s letting Dwayne see it from another vantage point.”

Haskins had displayed more consistent energy during practices since camp opened but was noticeably different Wednesday. During the portion open to the media, he would watch the other quarterbacks take reps, pacing once in a while behind the line or folding his arms. After one drill ended and the other quarterbacks ran to a different area, Haskins jogged behind. A week ago he was the first one down the field.

“I’ve been on different sides of this coin many times,” Allen said. “It’s part of the job. Very few get to be anointed in high school, college and pro and have no bumps. There’s a lot of adversity that hits. I feel what he’s feeling. I felt it last year and in college and high school. It’s a tough feeling.”

And a tough call for Rivera.

Haskins has started 11 games in the NFL after just 14 starts at Ohio State.

Washington had preached patience with Haskins from the moment the team drafted him with the 15th overall pick in 2019. There was a consensus of thought last year that he should not play as a rookie. Some felt his game needed work before he would be ready to help the team win. But after firing coach Jay Gruden and starting 1-7, Washington inserted Haskins.

When Rivera named Haskins the starter in mid-August, he said he would have made it a competition had there been a typical preseason.

But Haskins wasn’t the only issue with Washington’s team this season. It has lost each of the past three games by 14 points or more. Youthful mistakes have shown up in other areas of the offense, including from rookie running back Antonio Gibson and the left side of the line with tackle Geron Christian, guard Wes Martin and others.

Still, Rivera said this move could help the team win while the young players develop.

“One thing a lot of people don’t see is the frustration on the sidelines of the other players,” Rivera said. “I look at that. I see that. I feel that. The guys want to win, and right now where his development is, I think our best shot to win now is with guys that have been in the system.”

In response to a report about Haskins’ starting job being in jeopardy Sunday, his agent, David Mulugheta, tweeted about the QB’s inexperience and the supporting cast — a young offensive line and “limited weapons.”

“The same thing for Kyle,” Rivera said. “He has the same guys out there. He’ll have the same unfair shake, and we’ll see how it goes. … The players we have are the players we have. But the thing you have to understand is that there’s one primary position to touch the ball every play.”

Allen started 12 games for Carolina in 2019 and finished with the second-worst Total QBR (38.3) among quarterbacks with at least eight starts. Allen threw 17 touchdowns and 16 interceptions last season. The Panthers won his first four starts but went 1-7 the rest of the way, including a loss to Washington in Rivera’s final game with Carolina.

The Panthers traded Allen to Washington on March 23 for a 2020 fifth-round pick.

“As the season went on, Kyle struggled,” Turner said. “He just tried to do too much. That forced him into turnovers. He has to do a better job this time around with interceptions, but also ball security when he’s sacked or hit. He tried to force the ball into some tight windows; that’s what got us into trouble. This time away from playing has given him a chance to learn about himself, and that will help him going forward.”

Allen said last season he learned about situational football and the need to take better care of the ball. He said that during his time on the sideline he tried to take as many mental reps as possible.

“Last year was good for me to be thrown into the fire and have a lot of good happen and bad too,” Allen said. “It’s always easier to see it and say what you would have done on the sidelines instead of being in the game. For me to see and digest it and see how the offense runs and who does what well and situational football things too.”

Said Rivera: “He’s had some success. Not great success, but he’s had some. He can manage and control [the offense]. Hopefully things go well.”

Regardless, Allen now gets a chance to show what he can do — again.